By the very first Easter, at least a couple of Jesus’ disciples had lost faith. Or they were at risk of losing it. Two of these individuals were on the road, headed for Emmaus — a village about seven miles from Jerusalem. They were reeling from what they knew and what they didn’t know. Jesus was dead, not from a heart attack or freak accident, but dead in a way that marked him as cursed. They would have known the saying Deuteronomy 21:23: “For anyone hung on a tree is under God’s curse.”

That’s not the way it was supposed to have worked out — at least in their minds. The coming of Christ, the Messiah, the anointed one was meant to be about winning big: triumph, victory, glory. Not crosses.

Oh, sure, they’d heard a rumor that “some women” had gone to the tomb and “seen a vision of angels who said that [Jesus] was alive” (Luke 24:23). Crazy talk. Grief can do that sort of thing to you. So the two travelers plodded on, more bewildered with every step. They’d been filled with the sense that, in Jesus’ company, they’d been on the very edge of something really, really big. That God was in it. So what now? How to make sense of it?

A stranger joined the two travelers. We know who the stranger was, but “Their eyes were kept from recognizing him,” Luke says. The stranger was curious about their animated conversation: “What are you discussing with each other?” (24:16-17). They brought him up to speed, telling him how the authorities had caused Jesus to be crucified. “But we had hoped” – had hoped – “that he was the one to redeem Israel” (24:21). Game over, it seemed.

The stranger began sorting through familiar Scripture, connecting the dots, putting the puzzle together, slowly bringing the whole picture into focus. “Was it not necessary,” he asked, “that the Messiah should suffer these things and then enter into his glory?” (24:26)

Of course, we don’t have a record of exactly how this traveling Bible study might have proceeded. Here’s my guess: I think that the two disillusioned disciples were disturbed by that curse in Deuteronomy: “For anyone hung on a tree is under God’s curse” (21:23). Maybe the stranger explained that the one place the Messiah was surely meant to be was right there on the cursed tree, among all those who had been cursed, damned, written off, kicked out, ruined. The later church put it like this, as we know it in the Apostles’ Creed: “He descended to the dead.” Or, more vividly, “He descended into hell.” That descent to be with the cursed ones was no accident. It was his calling, his mission, his purpose:

For this is the reason the gospel was proclaimed even to the dead, so that, though they had been judged in the flesh as everyone is judged, they might live in the spirit as God does (1 Peter 4:6).

Wherever the cursed are, Christ is also there. If anyone is in hell, there is Christ. If anyone is deemed an outcast, unclean or shunned, there is Christ. So, maybe they talked about Deuteronomy on the Emmaus road. Or maybe the stranger quoted the prophet Isaiah: “He poured out himself to death, and was numbered with the transgressors; yet he bore the sin of many, and made intercession for the transgressors” (Isaiah 53:12). God’s Suffering Servant intercedes for “the transgressors,” and anyone in any kind of transgressors’ hell. The stranger “interpreted to them the things about himself in all the scriptures,” “beginning with Moses and all the prophets” (Luke 24:27).

There is a sense in which Jesus’ voice is always the voice of a stranger, always mediated through the voice of another — in this instance, perhaps the voice mediated by Luke’s Gospel. The authoritative voice one may learn to discern in Scripture is often drowned out by the sheer abundance and volume of other voices. But it hasn’t gone silent. It may be manifest in the voice of one who preaches, believe it or not, or a voice hidden in the words of a scholar or a novelist or poet or a voice set to music or the voice of a child or a stranger. No matter the medium, Christ’s voice always does the same thing: it clears some things up and it also unsettles us. If you pay attention, Jesus’ voice, will wake you up.

The travelers reached their destination, but they were so absorbed in their discussion that they wanted to keep the conversation going. They invited the stranger to join them for the evening meal. As Luke tells it: “When he was at table with them, he took bread, blessed and broke it, and gave it to them” (24:30). The Gospel writer intends the sequence of verbs to be noticed. The traveling companion took, blessed, broke and gave bread. These are the same verbs in the same sequence that occur in the account of the Last Supper and in the stories of the feeding of the multitudes. It’s not an accident. Something is going on here. What was it? “Then their eyes were opened, and they recognized him . . .” (24:31).

First, he had cracked the Scriptures open and fit the broken pieces of the story together. The disciples had been intrigued, absorbed and heartened by what he had shown them. And in the process, their profound sadness had begun to lift. If the stranger could be believed, God had, in fact, been involved in humanity from the beginning, and was still in it, cross and all. Then came the meal. It was an experience of quite a different order from the discussion on the road. Something different from – and more than – just getting the picture. Their eyes were opened! Recognition!

One can have perfect vision and fail to see what really matters. Sometimes it seems as though it takes a miracle to see all the way to the heart of things. And that, I guess, is what Luke says happened here. This was the first Lord’s Supper, and it was not a melancholy replay of a last meal. It was a joyful meal, the first meal anticipating a new era. The disciples found themselves on the threshold of the reign of God, and they saw with new eyes the companion who had been with them all along.

In his presence, they could see how everything – everything – was going to turn out. What they saw in that meal, in the breaking of the bread, was an insight into the very heart of things. What people of faith glimpse right now, by faith, will one day be universally known. Millennia may come and go. Churches may be built and fall into ruin. Ages will pass, and the One who has always been here, traveling with us, will be revealed — not just to people of faith but to all. “Then the eyes of the blind shall be opened” and “the glory of the Lord shall be revealed, and all people will see it together” just as the prophet had said (Isaiah 35:5, 40:5). 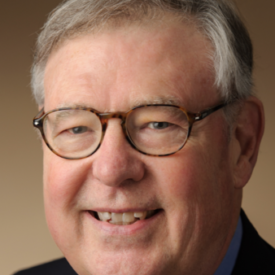