Outlook roundtable interview with Miles Teller and Jai Courtney, stars of “Divergent” Dallas, Texas March 5, 2014 Ronald P. Salfen, Presbyterian Outlook Presbyterian Outlook:  I was interested in the physical training aspect of this film.  What did you have to do to prepare, and how difficult was it to go through those fight sequences? Jai Courtney:  I got off light.  I pretty much cheated the system and didn’t have any training to do, mainly because I didn’t have any fighting (scenes). Miles Teller:  Yeah, I signed on for the movie and a week later I was in Chicago in what they called a “boot camp.”  Our two stunt coordinators were, like, complete badasses.  They were like Special Forces, trained killers.  I mean, this guy Garrett has an eye patch, and he was very scary. (Everyone laughs.)  So we got out there about two weeks, lot of push-ups, lot of sit-ups, lot of cardio, and then we were doing knife-throwing, and some gun tactical work.  You were expected to go to the gym … END_OF_DOCUMENT_TOKEN_TO_BE_REPLACED

Ethan Renner (Kevin Costner) has spent all his adult life working undercover for the CIA.  He’s done it all.  In between, he managed to find a wife, Christine (Connie Nielsen), and have a daughter, Zoey (the Oscar-nominated Hailee Steinfeld) by her, but the deeper he got into his “black ops,” the more he felt he was endangering them by having anything to do with them.  So he just sort of stayed away from them.  Oh, he’d call his daughter on her birthday — on a secure phone, of course.  And, pathetically, he’d sit and watch old videos of her when she was a young child, sitting in his hotel room alone in some faraway “killing zone” where he risked losing his very humanity.  What price service to country? Now Ethan is very sick.  Terminal cancer has already spread to the brain and lungs.  Nevertheless, the CIA still isn’t ready to let go of him, because he’s now even more valuable:  an agent who could put himself at extreme risk because he has nothing to lose. Ethan tries to tell them … END_OF_DOCUMENT_TOKEN_TO_BE_REPLACED

“For the days are surely coming when they will say, ‘Blessed are the barren, and the wombs that never bore, and the breasts that never nursed.’ Then they will begin to say to the mountains, ‘Fall on us’; and to the hills, ‘Cover us’.” (Luke 23: 29-30) “Pompeii” is about the eruption of Mount Vesuvius in 79 A.D., which completely wiped out the city of Pompeii and everyone in it. Excavations in recent centuries uncovered people “frozen in ash” in mid-stride, which indicates just how suddenly their lives ended.  The cascading lava flow was preceded by earthquake, flying rocks like fire and brimstone from the sky, a tsunami in the harbor and flooding in the city. CGI technology makes this movie really spectacular in its special effects.  But to its credit, it doesn’t content itself with just being a disaster epic.  It tries to tell a story first, and attempts to develop characters that the viewers will care about, which makes the spectacular disaster that much more poignant. Milo … END_OF_DOCUMENT_TOKEN_TO_BE_REPLACED

In a way, it’s unfair to criticize a movie for what it isn’t.  Obviously, it isn’t a lot of things.  It’s also unfair to criticize it for missed opportunities.  If that were the sole criterion, every film would be found substantially wanting.  But in this case, I can’t help it. I found myself thinking about what could have been, and wasn’t.  All that casting and filming, all that great CGI 3-D technology to throw around in pursuit of the worthy goal of depicting a decisive moment in history, and they content themselves way too much with slo-mo blood-splattering. Hulky muscular bodies wielding swords in battle, seemingly invincible, scything through well-armed and well-trained enemy troops like … well, boys play-acting their action heroes.  Sigh. Really, guys?  And the only woman is a wicked witch warrior princess who still manages to fight bare-breasted?  How old are you men, anyway? Historically, the character of Themistokles (are they disputing the traditional spelling, or just … END_OF_DOCUMENT_TOKEN_TO_BE_REPLACED 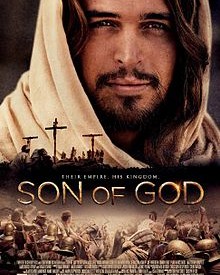 As a practicing believer, I think every Christian should see this film.  There.  I’ve said it.  I’m a shameless shill for this movie, because as a pulpit preacher with a limited audience, I think this has the opportunity to reach so many more people than we ministers ever could on Sunday mornings. Now, as an ordained PC(USA) clergyperson, and a lifelong student of the Bible, I’m aware that the editorial decisions here are legion.  This movie does not attempt to do something as literal as follow one Gospel all the way through.  The filmmakers pick and choose Gospel narratives, and sometimes conflate, and other times just make it up.  But it’s unabashedly from the point of view of a believer, and unreservedly “preaches” Jesus as the Christ, the Son of God.  So, it should be enthusiastically embraced by churches despite its flaws. Yes, if they were going to tell it from the perspective of the Apostle John, looking back on events from his solitary perch on the Island of Patmos, it … END_OF_DOCUMENT_TOKEN_TO_BE_REPLACED

Roundtable interview with Mark Burnett, producer of “Son of God,” & Roma Downey, actress in the film Interviewed by Ronald P. Salfen for the Presbyterian Outlook Dallas, Feb. 18, 2014 (Mark and Roma come in together, and sit beside each other) Mark: Guess which one is the angel? (everyone laughs; Roma Downey played the angel in “Touched By An Angel”) Mark:  I’m the mumbler. Outlook:  How did this idea come about to film “Son of God”? Mark:  It was one of the camera crew, while we were shooting scenes from (the television miniseries) “The Bible,” and he said, “This is epic.  This should be on a big movie screen.” We talked about it and we said, “You know, we’re going to be here (in Morocco) for six months, we’re going to shoot way more (film) than we need, this really is good.  And this would play so much better on the big screen, one narrative with no commercial breaks.”  So we just started.  You have to know that we had no clue if it would get to movie … END_OF_DOCUMENT_TOKEN_TO_BE_REPLACED