There was a time when physical pain threatened to drown out God’s voice in 18-year-old Phillip Storie’s life. But a life spent surrounded by his church family and serving others spoke louder than the pain.

Just before he graduated high school, Storie preached before the congregation of First Presbyterian Church in Anderson, South Carolina, where he grew up, and told of a painful part of his past.

At 15, Storie was diagnosed with a congenital abnormality in his bone structure, which caused the bones in his chest to push in on his heart. Without the intervention of surgeons, the pressure would kill him.

He was only halfway through high school. When he first heard the news, he was angry and scared. So he prayed.

Prayers helped him to make it moment to moment. But it was the tangible acts from others that helped affirm for him that God was listening to his prayers and that he was not alone.

“Despite the fear and pain, I never felt alone,” Storie said in his sermon to his church family. “God was always with me, and much like the bars supporting my chest, God, this congregation and my faith support me every single day. When we can’t hear God and feel abandoned, our cloud of witnesses speak loud enough to drown out our fear and suffering.”

In his family, Storie’s cloud of witnesses started with his grandparents – in particular his paternal grandmother, Margaret Storie, and his maternal great-grandmother, Helen Trussler.

Margaret Storie was a real confidant to Storie as he was growing up. And Helen Trussler gave him a family Bible that dates to 1894, giving him some idea as to how deep his family’s faith goes.

His parents, Andrea and Jonathan, built upon that foundation in him and his older brother, Matthew, by sharing stories with them of mission trip experiences and taking them along on such trips as soon as they were old enough.

As a young boy, he went with his mother to Camp Buc, which served as an outdoor ministry of the Foothills Presbytery in the Upstate of South Carolina. His mother was part of the committee that helped oversee the camp, and went to camp there during the summers.

“I saw God there so much,” Storie said. “I really learned to appreciate the environment at Camp Buc. That’s why I am interested in studying renewable energy. I want to work with a company that is trying to serve the world.”

At Camp Buc, he learned to love God’s creation. And in confirmation classes at church, he learned to delve deeper into those stories from God that he’d heard all of his life. He remembers learning from one of his church mentors, David Burriss, who helped him “see different parts” of his faith.

Then, when he was in middle school, he remembers his parents going on a mission trip to Wilmington, North Carolina. On that mission trip, Storie’s parents found out about another mission opportunity. They learned of Matthew 28, an organization that First Presbyterian Church has partnered with in serving the people of Bohoc, Haiti.

As soon as his parents went, they fell in love with the people of Bohoc.

“The stories that mom and dad brought back shaped me,” Storie said. “My mom loved Haiti. She loved working with the children there. She has said that she would be happy to work for Matthew 28 in Haiti, in one of the poorest countries in the world. That has always been powerful to me. She would give up her safety and security to help others.”

So as soon as he could, Storie was doing the same thing: stepping out of his own comfortable place to serve others.

He started off close to home by going to Asheville and Charlotte, North Carolina, while he was a middle school student. Then he went to New Orleans, where he helped rebuild a house that was ravaged by a hurricane, and to a Navajo Indian Reservation in Arizona.

In New Orleans, Storie said he felt like he’d really made a difference in someone else’s life.

And in Arizona, he saw what unquenchable joy looked like.

“The people there are in such a dark place,” Storie said. “But they are so thankful, so grateful. That just blew my mind. As a kid, I used to see God as a giver. Now, I see God all around me in the world.”

This summer, after he graduated from T.L. Hanna High School in Anderson, South Carolina, he spent three weeks in Mexico, serving the people of Agua Prieta through the Presbyterian mission Frontera de Christo.

He tutored some of the town’s children in math, taught English to those who wanted to learn, worshipped with participants in a drug rehabilitation ministry and helped in their community garden.

And he’s not done.

He plans on going back to Agua Prieta, and next summer he is going to Nicaragua as a freshman engineering student at Clemson University. In Nicaragua, he and other engineering students will go to a village where they will build a well so the people there will have access to clean water.

He’s not done, he said, because each time he serves God’s people, he learns something new. Each time, his faith is deepened.

In New Orleans, he saw the impact his service could have on someone else’s life.

In Mexico, Storie said he experienced authentic hospitality. “The community is so tightly knit. They rely on each other so much,” Storie said. “They genuinely wanted to welcome me. They want to love you.”

And in Arizona, he experienced a joy no dependent upon circumstances.

Storie acknowledges, “I don’t understand why so many bad things happen in the world. But I still believe. I still have faith. And because of that faith, I know that we are here to live and celebrate the Good News together.”

Charmaine Smith-Miles is a pastoral intern at First Presbyterian Church in Anderson, South Carolina, and is in the process of seeking ordination within the PC(USA). She is a new mother, and also on the journey of answering a call to ministry after spending 16 years as a newspaper journalist. 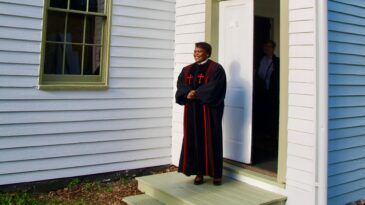