WEST LAFAYETTE, Indiana (PNS) — Vilmarie Cintrón-Olivieri first traveled to Campamento El Guacio as a 13-year-old girl and kept going back for the next decade.

For the girl raised in the capital city of San Juan, Guacio was a chance beyond the beach to connect with nature, the majesty of the mountains and the wonder of the valleys that seemed designed to temper the tropical heat.

It was also a chance to learn that the church was much larger than her beloved home congregation at Caparra Terrace Presbyterian Church in San Juan.

“I certainly wouldn’t be the person I am today if it weren’t for Guacio,” Cintrón-Olivieri says over lunch at Purdue University’s Earhart Dining Court during the second day of the 2019 Presbyterian Youth Triennium.

The person Cintrón-Olivieri is today is co-moderator of the Presbyterian Church (U.S.A.) General Assembly along with the Rev. Cindy Kohlmann of Boston. And at the Youth Triennium under her tenure as co-moderator, Cintrón-Olivieri got to see the event dedicate the lion’s share of its major offering to the Presbyterian camp that was so important to her life and faith as it continues to recover from the devastation of Hurricane Maria in 2017.

Like much of the island, Guacio was hit hard by the storm, damaging buildings and property. But in the months following, it has become a centerpiece of the community, providing everything from water to psychological care as recovery continues.

Miguel Rosa, a production team member and liaison between Triennium and Guacio, said Triennium director Gina Yeager Buckley was aware of Guacio through people from Puerto Rico who went there and later worked on Triennium.

“She said they wanted to make sure that the money would go to a place where it had a big impact on youth work, and seeing how the whole island of Puerto Rico was affected by Hurricane Maria and the Presbyterian camp was severely damaged she felt called to help out this cost,” said Rosa, who led the call for the offering during Wednesday afternoon worship at Triennium.

Miguel Rosa talks about the significance of Campamento El Guacio to Puerto Rican Presbyerian identity. A portion of Wednesday’s offering will go to help restore the camp’s chapel. (Photo by Rich Copley)

To Cintrón-Olivieri, who loves Guacio so much she was married there, the offering was in keeping with the spirit of the camp, which she says has been impacting youth in Puerto Rico for generations.

“My story is reminiscent of the story of many generations in Puerto Rico,” she says, picking at a salad between leading a small group and worship. “I’m by no means the first person to have gone through the Guacio experience.

“The beauty of the way the activities are organized: you’re a participant at one point, but it is designed for you to think, or it is the Holy Spirit moving you to say, ‘I want to pay this forward. I want to become a leader at some point and help out so that others can have the same experience that I had.’”

“You were mentored, and you feel the need to mentor others,” she added. “You were discipled, and you feel the need to disciple others. Isn’t that what the Gospel is all about? Is that what is meant to happen, that as we are touched, we look for ways to touch the lives of others? That is what Guacio is for the Presbyterian Church in Puerto Rico, for the young people, for the youth leadership.” 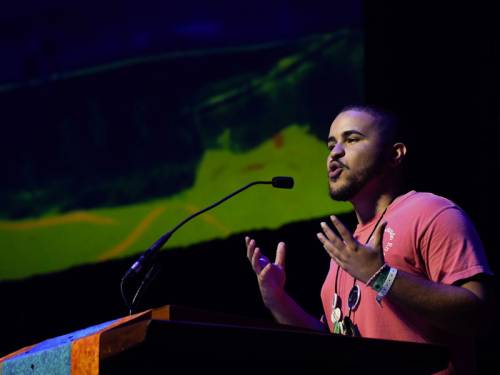 Rosa says the offering — which will be split 75%-25% between Guacio and the Youth Triennium Legacy Fund, respectively — will go to support the rebuilding of a chapel at the camp, as well as other needs following the storm.

As she has grown into a church leader, Cintrón-Olivieri says she has realized how important camps like Guacio, which is like many church camps around the mainland United States, and events like Triennium are in raising future generations of church leaders.

“Camp is formative,” she says. “Youth conferences are formative for our youth, not only spiritually, but emotionally and in developing leadership skills.

“But I realized that not every young person in our Presbyterian Church goes through that. In Puerto Rico it’s fairly common, but it’s not as common in other places. I wish it could be.”

Through Wednesday’s offering, she can see that will continue in Puerto Rico.

“After Maria, this offering has been a godsend,” Cintrón-Olivieri says. “This warmed my heart that the youth are helping other youth, and it’s actually their own, because we are all PC(USA).”