LOUISVILLE (PNS) Thirty-six presbyteries in the United States have formal ties with partner churches in Africa. There are good and practical reasons for that, the Rev. Debbie Braaksma told worshipers in the Presbyterian Center Wednesday.

Among them: The safety of the gospel depends on seeing how it’s lived out in other cultures.

“The gospel is never safe in any culture unless there is a witness from beyond that culture,” said Braaksma, Africa area coordinator for Presbyterian World Mission, quoting the Rev. Dr. D.T. Niles, the former executive secretary for evangelism for the World Council of Churches.

For her text Wednesday, Braaksma used 2 Timothy 1:3-14, Paul’s letter to Timothy, which opens with expressions of thanksgiving and encouragement. Paul’s letter includes these words: “I am reminded of your sincere faith, a faith that lived first in your grandmother Lois and your mother Eunice and now, I am sure, lives in you.”

Braaksma’s sermon was the same one she wrote as a sample sermon for World Communion Sunday. 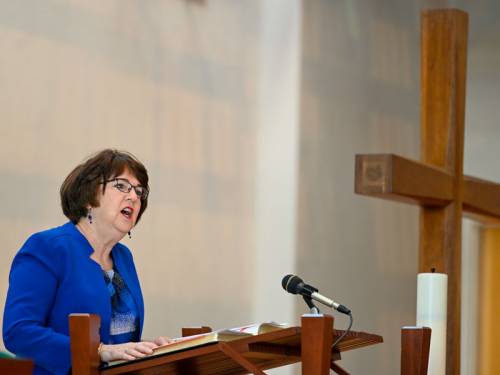 The Rev. Debbie Braaksma, Africa area coordinator for Presbyterian World Mission, preached Wednesday during worship in the Chapel at the Presbyterian Center in Louisville, Kentucky. (Photo by Rich Copley)

“Could a witness ‘from beyond’ help us more clearly understand this gospel and its implications for a life of faithful witness to the Lord Jesus Christ in these perilous days?” she said, noting that ties between U.S. presbyteries and African mission partners “are based on deep and lasting relationships often spanning a couple of decades.”

American Presbyterians have helped address varied human needs, including prenatal health in Niger, which has one of the highest infant mortality rates in the world, and the training of pastors in Malawi, which has one Presbyterian pastor for every 7,000 laypeople.

“While sharing our resources is absolutely vital,” she said, “it is soon apparent to most Presbyterians engaged in these partnerships that receiving is every bit as important as giving … I believe that the witness from the African church can help us to more clearly see the breadth and depth of the gospel and help us to save it from being misappropriated for destructive political ends.”

Paul’s second letter to Timothy makes it clear, she said, that some in the early church were feeling discouraged and even ashamed to be identified as followers of Christ. Many were wandering away from “the essentials of the gospel,” she said, and “were actually driving people away from God.”

“Does this sound familiar?” she asked. “In the same way that Paul exhorted Timothy to keep the faith, if we have ears to hear and if we have the humility to sit at the feet of the African church in a learning posture, I believe that our African partners have much to teach us …” 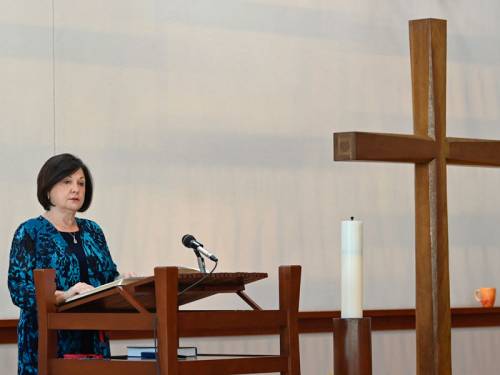 Kathy Melvin, director of mission communications for the Presbyterian Mission Agency, reads from Paul’s second letter to Timothy during worship in the Chapel at the Presbyterian Center on Wednesday. (Photo by Rich Copley)

Braaksma said it must have been difficult for Timothy to have confidence in a Paul behind bars. “In the viewpoint of the secular world, Paul didn’t get it right. After all, he landed in jail, didn’t he?” she said. “It pains me to say it, but sometimes I encounter Presbyterians who seem ashamed and dismissive of the African church, insinuating that its theology is less developed, less sophisticated than ours.”

That’s not at all the message we hear from U.S. Presbyterians who are “engaged in deep partnership relationships with African churches,” she noted. Among the gospel work currently being undertaken by Africans in Africa:

Braaksma concluded her sermon with these words from the Rev. Tom Sheffield, convener of the Zambia- Zimbabwe-Mozambique Mission Network: “Forming relationships is the way we become a global church,” he said. “Partnership is not something one does; it is something one lives. It is hard work. The more we go Zimbabwe, I say, the less we know. The more we go, the deeper we go, the more we open ourselves to each other and discover how complex we all are.”