PHILADELPHIA (PNS) — Last Wednesday a PHS LIVE panel lifted up the ministries of Hispanic and Latinx Presbyterians in the Presbyterian Church (U.S.A).

Five mid council leaders shared their perspectives on their own ministries and identified ways Latinx and Hispanic Presbyterians contribute unique gifts to the PC(USA).

The panelists and moderator Nancy J. Taylor, Executive Director of the Presbyterian Historical Society, also identified ways the PC(USA) can better resource Hispanic and Latinx Presbyterians and learn from their experiences.

Hispanic and Latinx communities, hardly monolithic in culture and outlook, are severely underrepresented in mid council leadership and other areas of the PC(USA), including the collections of the Presbyterian Historical Society.

Spanish and English interpretation for the hour-long session was provided by Global Language Resources, a part of the PC(USA)’s Administrative Services Group, the business office of A Corp.

The five panelists are current presbytery leaders, with all having served previously at congregations or with the national church, including the Presbyterian Mission Agency.

The Rev. Ruth Faith Santana-Grace of the Presbytery of Philadelphia described herself as a “Nuyorican,” child of the denomination, and pastor’s kid. Like other panelists, she grew up in a Spanish-language church. Rev. Santana-Grace is a member of the PHS advisory council.

Joanna Kim of Grace Presbytery in Texas, a PHS board member, grew up in South America (Argentina), like two other panelists, the Rev. Eliana Maxim of Seattle Presbytery (Colombia) and the Rev. Juan Sarmiento (Venezuela) of the Presbytery of San Fernando in California.

The fifth panelist, the Rev. Fernando Rodríguez of Denver Presbytery, spent time as a child in Puerto Rico and New Jersey. He spoke about growing up with a sense of “in-betweenness,” a way of seeing the world that he and other panelists described as a strength many in Hispanic and Latinx communities have.

Rev. Santana-Grace described the panelists as “cross-cultural,” a phrase Rev. Maxim returned to later when making a point about the adaptability and determination of Hispanic and Latinx ministry.

Rev. Maxim said Hispanic and Latinx leaders are often confronted with carrying out ministry in a wider church where the rules were not drafted with people of color in mind.

“We’re going to find a way to make those rules work for us…That comes directly from our experience” as immigrants and children of immigrants.

Rev. Rodríguez used the saying “siempre hay arroz en la olla” (“there is always rice in the pot”) to describe the emphasis in Hispanic and Latinx communities on providing for all.

Growing up in New Jersey and Puerto Rico in “Presby-costal” settings, he appreciated how the Presbyterian church provided him with a voice—“a voice that had a role in the decision making of the church.

“Having others understand that they also have that voice has been important to me. Having been on the margins of communities has been very important.”

Rev. Sarmiento and Kim picked up on the idea of margins.

“Seeing from the margins adds to the depth and diversity that often is missed in the life of the church,” Kim said, adding that people in the margins can be effective advocates for diversity at congregations that are homogeneous.

Rev. Sarmiento spoke about ways worship and evangelism are distinctive in Latinx and Hispanic churches, and how those differences are reshaping communities around the United States.

“One-fourth of the Hispanic population in the U.S.A. is protestant,” he said. “Pasión is something we add to the church.”

Rev. Santana-Grace said, “The word evangelical is not a bad word” in Hispanic and Latinx Presbyterian communities.

Taylor asked if the pandemic had caused the panelists to grieve any aspects of their ministry. Several spoke about problems predating the pandemic, including an unwillingness by some congregations to respond to demographic changes and other shifts at the local level.

As with many congregations, mid councils could do much more to embrace diversity. Nationally, 18 percent of the population is Hispanic or Latinx, according to the Census Bureau.

The five panelists are among only seven Hispanic and Latinx leaders at mid councils around the country, not counting mid councils in Puerto Rico.

Rev. Maxim said, “It can sometimes be a very lonely place to be.”

Rev. Santana-Grace said, “That there are only 7 of us is not a celebration…It is an existential challenge” to the church.

Kim lamented the personal impact of Covid on Latinx and Hispanic Presbyterians around the nation and internationally.

“My family is mostly in Argentina,” she said. During the pandemic, her “longing for home has deepened very intensely. That I cannot travel to see my mother or her travel to see me is very saddening.”

Travel and gathering restrictions have created a disproportionate stress on dispersed Latinx and Hispanic communities.

“Immigrant churches are not a faith community that only lives close to a congregation,” Kim said, adding that a reliance on Zoom meetings has further alienated those who are marginalized.

Taylor’s last question was about how the church in general and PHS specifically can do more to collect and share the history of Latinx and Hispanic Presbyterians.

Rev. Maxim said, “I like this question!” before offering some ideas, including not waiting on National Hispanic Heritage Month to focus on the community and its history, and collecting more stories about Latinx and Hispanic Presbyterians from western states.

She also urged more collaboration internationally, including with former and current mission fields shaped by colonialism.

”In Seattle we’ve established a partnership with a presbytery in Colombia that’s based on mutuality.

“How do we revisit relationships and reconcile,” Maxim asked, “and also celebrate our shared history?”

One idea several panelists liked was collecting more oral histories from Latinx and Hispanic Presbyterians, as a way to identify and celebrate stories of ministry that have not been written down.

After Taylor answered a question about materials currently at PHS that relate to Latinx and Hispanic ministries, and acknowledged that much more needed to be done to collect stories about those ministries, Kim urged the panelists to invite PHS to their mid council meetings. That way, more Presbyterians can know that PHS is a source of history but also a resource for gathering and sharing stories.

Rev. Santana-Grace spoke about the personal stakes of collecting history.

“My dad was an elder in New York City. I don’t want his story lost.”

A PHS LIVE eblast from last week made the case for collecting records from Hispanic and Latinx Presbyterians, saying that PHS, the national archives of the PC(USA), “is not whole without Hispanic and Latino/Latina voices in the stacks.

“Individuals wishing to deposit records at PHS from any PC(USA) body should contact David Staniunas [PHS Records Archivist] at dstaniunas@history.pcusa.org for help.”

by Fred Tangeman, Office of the General Assembly 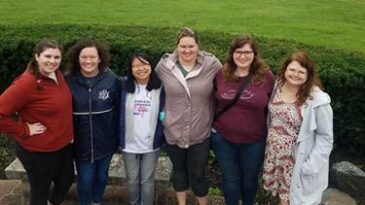