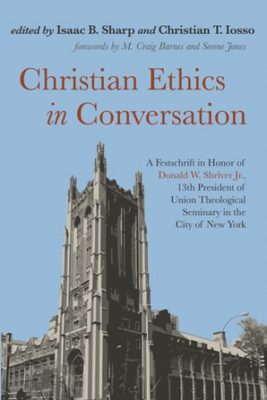 Donald Shriver used to ask his students: “What can you do to cultivate ethical reflection in congregations? Are there any social questions without moral and spiritual dimensions? What is the usefulness of social conflict for the achievement of a new order of social justice? What alliances with non-church institutions are appropriate to the church’s ministry?” and, “Can wisdom from the past become a true servant of the future?”

As Union Theological Seminary’s professor of social ethics and its 13th president, Shriver was uniquely effective as a pastor, prophet, scholar, teacher and institutional leader. After his recent death at the age of 93, we may wonder how he led an illustrious and revered seminary from the brink of collapse, through the crises of its “breakthrough years,” into a flourishing future?

If these questions strike you as germane to your own calling as the leader of a Christian congregation or educational institution, then “Christian Ethics in Conversation” is a book awaiting your eager engagement. Colleagues such as Phyllis Trible, Serene Jones and Cornel West, among others, including Shriver’s daughter novelist Lionel Shriver, attest to Shriver’s impact in a “festschrift,” a book honoring his impact and shared with him during his lifetime.

What becomes abundantly clear is that Donald Shriver, like a conscientious pastor choosing respectful dialogue over brash and ill-considered action, courageously absorbed the criticisms hurled at him from every direction while he simultaneously and patiently led the seminary through the fray of communal conflict by making difficult decisions that broadened and bolstered its Christian mission. Lay and clergy leaders alike will benefit in quantum measure from Shriver’s experience.

Some have said that Shriver literally saved Union Seminary. Shriver, who came to Union as a southerner nursed in a Presbyterian ethos and transformed by and within the civil rights movement, took to heart the words of his colleague Dean James Laney of Emory University: “You will find that nothing you would like to do at Union can be done by you alone.”

The book’s themes run the gamut of Shriver’s involvements in crucial events of his and our time as he guided the seminary’s response: centering feminist, womanist and liberationist theologies within the curriculum, transitioning from a majority-male to a majority-female and racially diverse student body and faculty, embracing timely civil rights and peacemaking initiatives, advocating long-overdue social and economic reparations within collective power structures at home and abroad, engaging in contrite repentance and atonement for the evils of the Holocaust, redesigning James Chapel as the spiritual, artistic and liturgical center of the seminary, providing insights from Shriver’s seminal writings and underscoring his relentless development of deep and abiding interpersonal relationships.

Calling Shriver “the most prophetic seminary president in late-twentieth-century America,” Cornel West said, “I thrived on the integrity and sincerity of Donald Shriver. The mode of his way and the manner of his style convinced me he valued me as a human being, fellow scholar and child of God. In White Supremacist America, this is not an easy task.”

By way of full disclosure, this reviewer was one of Shriver’s students at Union Presbyterian Seminary in the late 1960s. His inimitable “mode” and “manner” invited us into profoundly personal and challenging conversation with him as our brilliant teacher, both within and beyond the classroom.

Charles Davidson, a retired Presbyterian minister and professor of pastoral theology living in Asheville, North Carolina, is the author of “Bone Dead, and Rising: Vincent van Gogh and the Self Before God,” and the editor of George Buttrick’s “Guide to Preaching the Gospel.”

Presbyterian Outlook supports local bookstores. Join us! Click on the link below to purchase “Christian Ethics in Conversation” from BookShop, an online bookstore with a mission to financially support local, independent bookstores. As an affiliate, Outlook will also earn a commission from your purchase.