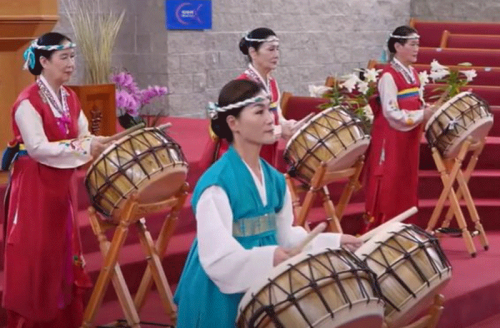 (PNS) — The National Caucus of Korean Presbyterian Churches (NCKPC) of the Presbyterian Church (U.S.A) marked 50 years of ministry last month with a celebration that included Scripture, music, dance and the presenting of a $60,000 Jubilee Seed Fund to the next generations.

The Jubilee celebration was held April 26-28 at Korean Central Presbyterian Church in Cleveland, Ohio, during the annual assembly of the Caucus.

The NCKPC traces its history back to a March 18, 1972 gathering of 19 Korean pastors and lay people who were participating in a meeting of the National Asian Presbyterian Caucus (NAPC) in St. Helena, California. Half a century later, the NCKPC has about 400 member churches.

The “Jubilee celebration has been a great way to look back at the road we traveled as Korean American churches and also look forward to the road yet untraveled,” said the Rev. John Yu, pastor of True Light Community Church in Denver, and the Jubilee Planning Committee’s Secretary.

“Just like anything in history, unless we are mindful of our past and make a conscious effort to improve ourselves, with the help of the Holy Spirit, we can easily fall back to the status quo,” Yu said. “As we look forward to our next 50 years of ministry, we hope to continue to work together, setting aside our differences we have used as excuses and work together for God’s glory.”

The Jubilee Planning Committee was commissioned three years ago by NCKPC to begin organizing the anniversary events. Tasks included choosing the biblical theme of Jubilee (Luke 4:19 and Leviticus 25:19), writing and composing the “Jubilee Song,” and formulating the NCKPC First Jubilee Confession of Faith, including the Statement and the Responsive Readings. There also was a Jubilee Symposium for Immigrant Theology last year, the awarding of Jubilee Grants ($5,000 each) to four pastors of small churches, an English Ministry (EM) pastor, and two special ministries, as well as raising a Jubilee Seed Fund for the next generations.

Historical reflection was the main staple of the celebration in Cleveland. Participants, both online and in person, heard about the history, key leaders and legacy of the NCKPC on the first day from three respected leaders.

On the second day, participants listened to a lecture on “Korean American Presbyterians and the Historical Struggle for Racial Justice in the United States” by Dr. Jane Hong, an Occidental College faculty member, and a response by Dr. Sung-Deuk Oak, a UCLA faculty member.

Topics covered included the long history of anti-Asian racism in the United States, including Anti-Asian discrimination and hate crimes committed during the global pandemic, and the roles of three outstanding Presbyterian leaders who attempted to fight for racial justice in solidarity with other minority groups.

The most significant event that highlighted this Jubilee Assembly was the awarding of a $60,000 Jubilee Seed Fund to the EM representative of the next generation. This special fund will be used to hold intercultural and intergenerational symposiums in the future, support EM pastors in dire need and sponsor other EM ministries. The Jubilee Planning Committee recommended that the NCKPC continue the Jubilee Seed fundraising campaign and constitute an EM Committee to support EM ministries.

The idea for the fund originated with Elder Hunam Nam, Chair of the Jubilee Planning Committee, who hopes it will help to build up the next generations that will carry on the faith of the first generation and fight for racial justice in the United States.

The recipient of the fund, the Rev. Samuel An, pastor of New Hope Church in Redford, Michigan, reflected on the Jubilee.

“We took time, on the occasion of our Jubilee, to address some of the mistakes made by Korean American churches in our first 50 years as a caucus,” An said. “We confessed our need to do more to support female clergy, pastors of smaller churches, and those serving the next generations of Korean Americans. In our Jubilee assembly in Cleveland, I saw grants being given to pastors of smaller churches in ways that highlighted how God calls these churches, though small in size, to fulfill a crucial missional need.”

An went on to say, “I was humbled by how much the Korean American churches had sacrificially given to resource the second and third generation of Korean American ministry. I believe that the $60,000 earmarked for that purpose will be used to spur innovation and resource those standing in the gap to turn the hearts of the parents to their children, and the hearts of the children to their parents.” (Malachi 4:6).

The Rev. John Yu and the Rev. Samuel An contributed to this report.