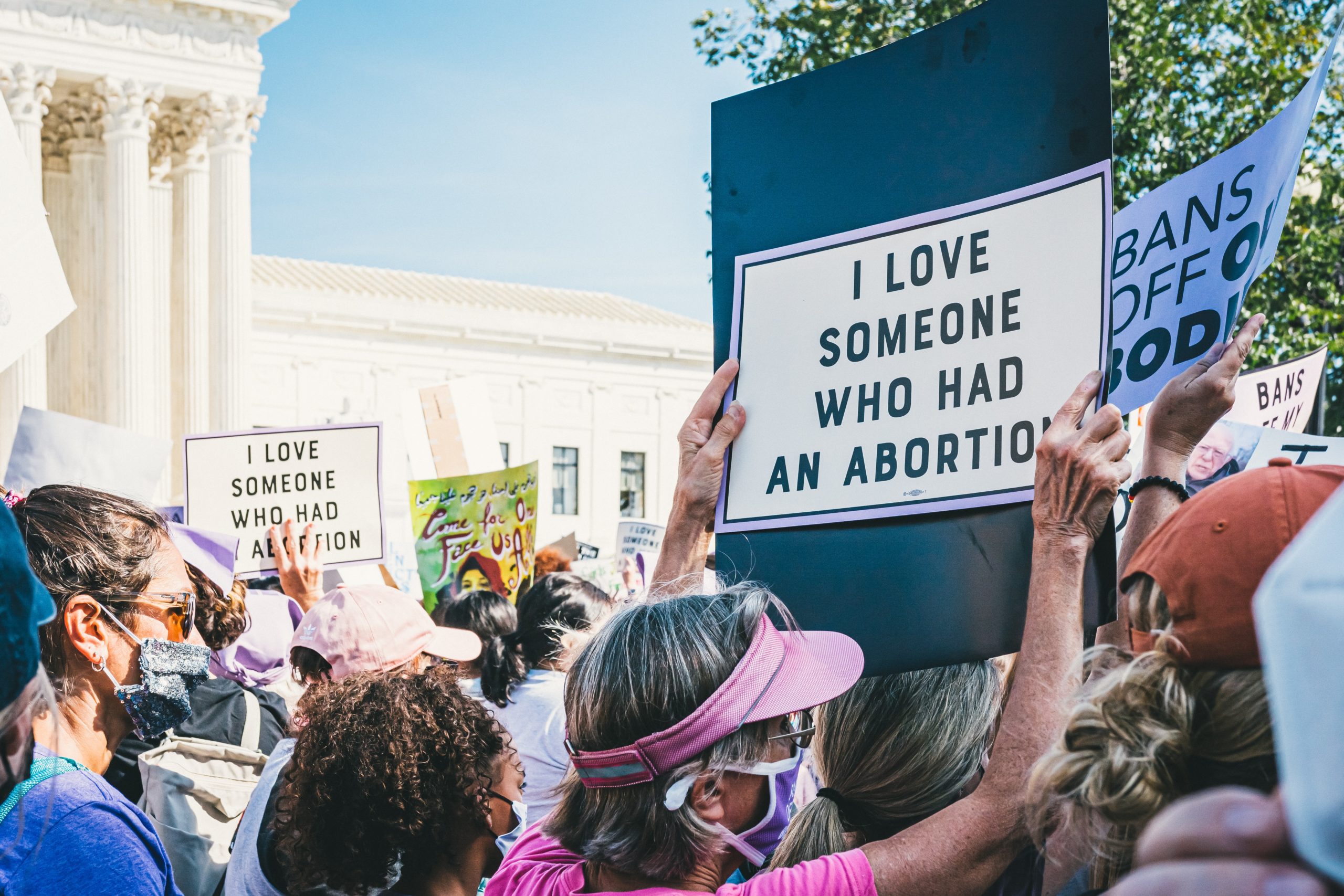 (RNS) — A draft opinion suggesting the Supreme Court will vote to strike down Roe v. Wade, the landmark decision guaranteeing federal protection for abortion rights in the United States, was published Monday night (May 2) by Politico.

The Supreme Court verified the authenticity of the document Tuesday morning but said the leaked draft does not represent its final view.

The reactions swiftly rolled in from both sides of the historically polarizing debate, including from faith leaders, a group more divided than many Americans might think. While reproductive rights have often been framed as a liberal issue, staunchly opposed by the religious right, views of abortion among the faithful are not monolithic.

A majority of Americans say the Supreme Court should uphold Roe v. Wade — including majorities of nonevangelical Protestant Christians, Catholics and those who identify with no religion, according to a Washington Post-ABC News poll conducted last week.

Support for overturning the decision is strongest among evangelical Christians (45%), while 68% of evangelicals say abortion should be illegal in all or most cases, according to the poll.

Here’s a sampling of what faith leaders are saying.

“Abortion access can’t be separated from laws attacking trans kids’ bodily autonomy. It’s all connected—one campaign to structure US law around evangelical faith. Liberation is collective. We only get free when we fight for all of us.’

“If true, SCOTUS will overturn Roe v. Wade. A grave injustice will be corrected. Prayers answered. Now, the church must go over-and-above to care for mothers & their children.”

Rabbi Danya Ruttenberg, scholar in residence for the National Council of Jewish Women, tweeted a link to a piece she has written laying out what she describes as the “Jewish case for abortion justice,” saying:

The Rev. Al Mohler, president of The Southern Baptist Theological Seminary, addressed the ethics of the leaked opinion on his podcast “The Briefing” on Tuesday morning. Mohler said in part:

“The release of this draft is dirty pool. It’s horribly unethical. There hasn’t been a breach of the court’s prize confidentiality and protocol like this in any recent memory, probably in all of American history, even the history of the Supreme Court.”

He ended his discussion of the leak, “And when the Supreme Court hands down its ruling in coming weeks, the defenders of life dare to hope that this is indeed the court’s ruling and, oh Lord, let us pray, may it be true.”

Linda Sarsour, a Muslim organizer and co-founder of the Women’s March, tweeted:

“I tell people of faith all the time, including Muslims, that this debate is not in fact about abortion, it’s about whether the government should have the power to dictate a woman’s health choices. Regardless of your position on abortion, this should be of great concern.”

“The leak is a stunning breach. The substance of the purported early draft is not surprising. Roe being overturned won’t make abortion illegal. States will act to protect unborn babies or abortion rights. Congress may act. NMW, we must better support women w/unexpected pregnancies.”

“Abortion justice is an economic issue, a racial justice issue and yes, it’s a Jewish issue. In Judaism abortion is not just allowed it is also mandated to preserve a pregnant person’s life and well-being. We will fight for Abortion Rights with all of our strength.”

“Praise God! The Supreme Court has voted to overturn Roe v. Wade according Politico, which received a supposedly leaked copy of the opinion draft. I don’t know if this report is true, but if it is, it is an answer to many years of prayer.”

In a post on the website of the House of Deputies of the Episcopal Church, its president, the Rev. Gay Clark Jennings, said in part:

“As Episcopalians, we have a particular obligation to stand against Christians who seek to destroy our multicultural democracy and recast the United States as an idol to the cruel and distorted Christianity they advocate. In 2018, our General Convention declared that ‘equitable access to women’s health care, including women’s reproductive health care, is an integral part of a woman’s struggle to assert her dignity and worth as a human being.’ Now—before this outrageous opinion becomes law—we must make our Christian witness to the dignity of every human being by insisting that we support the right to safe and legal reproductive health care because our faith in a compassionate God requires us to do so.”

“‘Roe’ is collapsing and millions of lives will be saved because of the millions of evangelicals who voted in 2016 for a President who kept his word.”

“If the Supreme Court overturns Roe, half of Americans will lose the basic right to make their own reproductive choices. No matter what happens, we’re going to keep fighting in all 50 states to protect abortion rights and access — because abortion is an atheist issue, full stop.”

In a written statement from the National Association of Evangelicals, President Walter Kim said:

“Evangelical commitment to protecting the unborn stems from our deep understanding that God created human beings in his image and that every human life from conception to death has inestimable worth. If the Dobbs decision remains unchanged, we will celebrate that citizens will have greater opportunity to engage in creating policies that impact women and children. We also recognize that after this decision, vulnerable women and children will need a lot of support. Churches should be ready to help.”

Americans United for Separation of Church and State

In a written statement from Americans United, President and CEO Rachel Laser said in part:

“The foundational principle of separation of church and state safeguards our right to live and believe as we choose. Our laws do not allow anyone to use their religious beliefs to harm others. Allowing one person’s religious beliefs to dictate another’s personal medical decisions is the very definition of harm. We’ll say it again: Reproductive freedom is religious freedom.”

In a written statement from Catholics for Choice, President Jamie L. Manson said in part:

“Any weakening or overturning of Roe v. Wade is a direct result of the overreach of the Catholic Church, led by a small group of old, mostly white, allegedly celibate men who will never, ever become pregnant – yet have spent almost 50 years and millions of dollars trying to control women’s bodies, capture the federal judiciary, and take choice out of the rightful hands of patients and their caregivers. … To the Catholic bishops of the United States, we say: how dare you!’

J.D. Greear, past president of the Southern Baptist Convention and pastor of The Summit Church in Durham, North Carolina, told Christians praying for an end to abortion that their work was not over in a post on his website. Greear shared a prayer, which reads in part:

The Rev. Traci D. Blackmon, who heads the United Church of Christ’s Justice and Local Church Ministries, shared a brief statement on the denomination’s website:

“In this moment when abortion rights are under assault, please know this: the United Church of Christ faithfully supported access to safe abortion before Roe v. Wade and we will faithfully support it now. This is not a draft for us. This is discipleship.”

In a written statement from Interfaith Alliance, its president, Rabbi Jack Moline, said:

“A ruling stripping access to essential reproductive care would betray the constitutional promise of true religious freedom, undermining the rights of people of all faiths and none to make healthcare decisions rooted in their own values — not those of their legislators.”

“Abortion is a human dignity issue, but that issue doesn’t end at birth.”

The Rev. Chuck Currie, a minister in the United Church of Christ, tweeted:

“Jesus affirmed the moral agency of women. We should do the same. I call on Christian clergy across the nation to do whatever in their power to assist women seeking abortions- regardless of the law.”

In a written statement from Unitarian Universalist Association, its president, the Rev. Susan Frederick-Gray, said in part:

“Our faith still urgently calls us to advocate on behalf of all people to be able to readily access safe, legal abortion care whenever and wherever they need it. We will not rest until that reality is true across the country.”

This article has been updated.