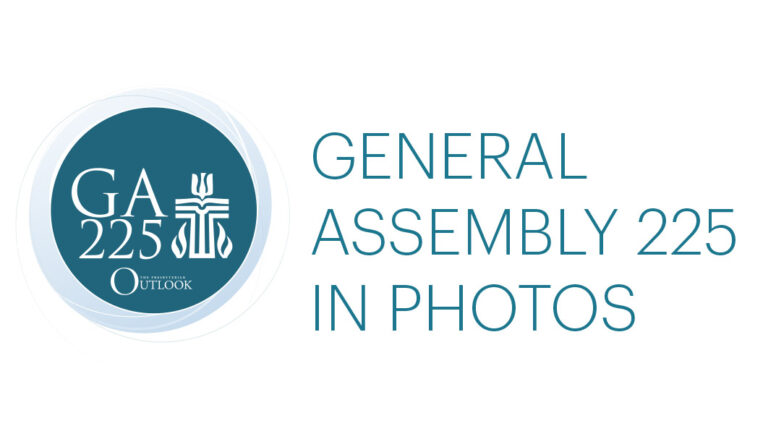 YAADs
Everyone agreed that the YAADs were a highlight of this General Assembly. According to Jeff Moles, who coordinated this year’s program, YAAD participation was down. At a traditional assembly, we have around 130 YAADs, Moles reported. “There are 166 presbyteries. Around 90 of them elected a YAAD. 60 YAADs showed up in Louisville for committee meetings.”

Worship
Worship was a highlight at GA225, even in hybrid form. The production team wove together in-person and video components to each worship service that was not only seamless but inspiring.

Interview with J. Herbert Nelson
Presbyterian Outlook Editor Teri McDowell Ott got a chance to sit down with PC(USA) Stated Clerk J. Herbert Nelson to discuss his MLK address, the reaction to his description of the continued occupation in Israel/Palestine as “21st-century slavery,” and how he understands the church today. (Find the interview here.)

Protest
Unlike past General Assemblies where dissenting voices were common and protesters mixed with commissioners in convention center hallways and exhibit areas, the only visible protest at GA225 included this hot air balloon set up in front of the Presbyterian Center for the morning of Tuesday, June 28, by a coalition of pro-Israel mainline Protestant groups.

Reacting in real-time
Madison McKinney, co-chair of the Advocacy Committee for Women’s Concerns and a ruling elder from the Presbytery of Northern Kansas, speaks to the Health, Safety, and Benefits Committee. On the day SCOTUS overturned Roe v. Wade, the committee voted on the PC(USA)’s stance on reproductive justice.