By the end of this year, projections are that the unrestricted reserve – known as the Presbyterian Mission Program Fund (PMPF) – will fall to less than $1 million over the required minimum. By 2017, assuming no changes in unrestricted giving or in the spending pattern, there would not be enough left in the reserves to balance the budget. 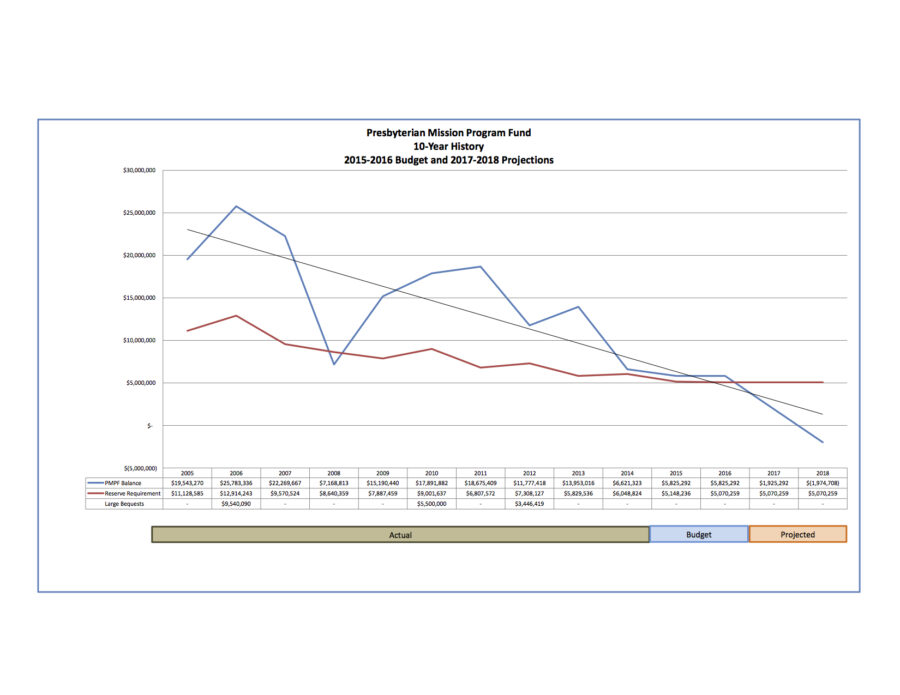 During a conference call May 8, members of the board’s finance and audit committees looked at a 10-year history of PMPF funding, showing generally a downward trend (with a few deviations, reflecting disruptions in the investment market or significant bequests). Among the points they made:

As the Presbyterian Mission Agency works to shape its new Mission Work Plan for 2017-2020, these financial realities will be part of the equation. Increasingly, individual Presbyterians and congregations give to charitable causes, but not necessarily through the PC(USA), said finance committee member Glen Snider, wondering whether it might be possible to do research on the giving that Presbyterians do outside the denomination. “This may give us a better understanding of the kinds of priorities churches are really setting for themselves, and if our efforts at the national level are really congruent.”

Linda Valentine, executive director of the Presbyterian Mission Agency, said the shift to giving to parachurch organizations and other nonprofits goes back for years – in part a reflection of donors’ desire to give specifically to causes they support, rather than providing unrestricted funds to a denomination. In drafting the next Mission Work Plan, the emphasis will be on “ministries that we can sustain” – meaning that funding will be available to keep the work going – and “ministries we can do best and the church most needs,” Valentine said.

Making Presbyterians aware of the PC(USA)’s financial difficulties, including the possibility that mission co-workers might be pulled from the field in 2016 and that the unrestricted reserves are close to being depleted, “may actually prompt people to start thinking of large bequests,” said finance committee member Jeffrey Joe, if they are aware of the need.