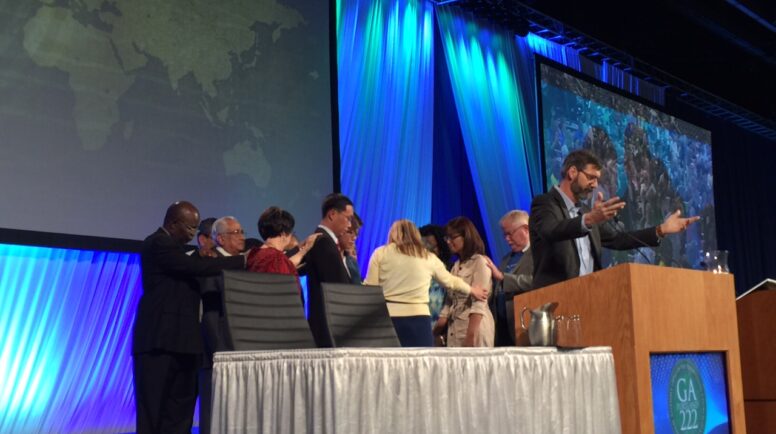 On June 23, the Presbyterian Church (U.S.A.) General Assembly commissioned a new class of mission co-workers to serve “to the ends of the earth.”

Hunter Farrell, director of Presbyterian World Mission, described the shared call to do mission in partnership with the global church. He invited the assembly to join in a Haitian creole call-and-response greeting of honé (honor) and respé (respect). He said: “Honor and respect are established as integral to your interactions moving forward. Sisters and brothers in Christ, this is the rhythm of partnership that our church understands to be central to our calling as followers of Jesus Christ.  Honé/respé is the call-and-response of doing mission in the way of Jesus Christ, whose interactions with common people began the rhythm of partnership toward which our church still moves 2000 years later.”

The assembly celebrated the service of mission co-workers who have retired in the past two years, noting that their combined mission service exceeded 358 years. Those honored were:

Farrell said other mission co-workers had come forward to continue a legacy of nearly 180 years of Presbyterian mission service. Eight new mission workers and one long-term volunteer were commissioned.

Six of the mission workers have already left to serve; videos and photos of them were shown.  Donna Sloan was present  and was introduced by Debbie Braaksma, who said Sloan would be a professor at the Zomba Theological College in Malawi.

“Our presbyteries are the fertile ground in which the seeds for mission service are planted and nurtured,” Yates said.  “Our mission workers receive encouragement, guidance, and support from their home presbyteries.  They serve as spiritual anchors for our mission workers when they are far from home.”

Lydia Kim, associate in the Young Adult Volunteer (YAV) program office, introduced the 85 YAVs that served in the 2015-2016 year and previewed the class of more than 75 YAVs who will serve in the 2016-2017 year. Kim said each of them had committed to a year of volunteer service at one of six sites internationally or 16 sites nationally, “living simply and in intentional Christian community, so that they might discern God’s call, not just during their service year, but for their whole lives.”

Kamal Youssef Yacoub from Egypt and Douglas Chipofya from Malawi led the mission workers and the assembly in a litany of commissioning. Those onstage gathered around the mission workers present and laid hands on them, joining their voices together and stating, “We share in a calling to be the hands, feet, words, and tears of Jesus Christ in the world.  We promise to welcome, embrace, and encourage these sisters and brothers. We commit ourselves to support these companions in mission with prayer, encouragement, and resources, so that Christ’s reign of peace, justice and love will be known in all our communities and throughout the world.”

Despite budget pressures, the church continues to commit resources to the sending and support of mission co-workers. While the number of mission workers serving with Presbyterian partners around the world declines each year, the church is still filling limited strategic positions, both by replacing some retiring mission workers and by filling strategic new roles as funds are available and as Presbyterian World Mission responds to the call of God’s spirit.