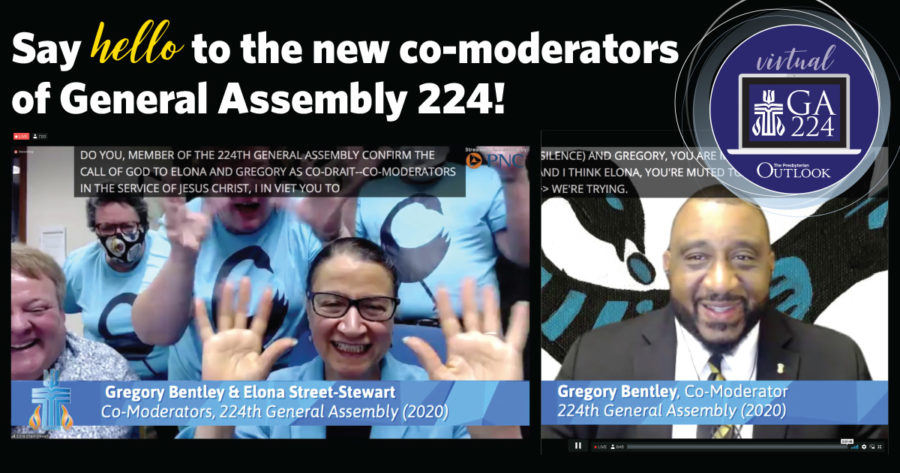 Needing only one ballot, the 2020 General Assembly of the Presbyterian Church (U.S.A.) elected as its co-moderators an Indigenous woman and a Black man: Elona Street-Stewart and Gregory Bentley, a synod executive and a pastor, and the only team seeking election from which both candidates were persons of color.

Street-Stewart will serve as the first Native American co-moderator ever of a PC(USA) General Assembly; she is from the Delaware Nanticoke tribe. 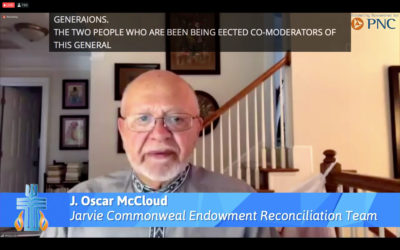 The pair’s responses to the election were emotional: a sign of, as J. Oscar McCloud said in the prayer he offered during their installation, how their paths were watered with the tears and blood of their ancestors. Bentley pronounced himself to be “hippopotamus happy and dinosaur delighted.”

Some previous elections – including in 2018 – took a series of ballots to pick a winner, but the assembly elected Bentley and Street-Stewart on the first ballot during a special plenary convened June 20 when the assembly ran out of time the previous night. Bentley and Street-Stewart pulled in three times as many votes as the next-closest team – with 304 votes for them; with Arthur Fullerton and Marie Mainard O’Connell finishing second, with 90 votes; and Moon Lee and Sandra Hedrick garnering 65 votes. 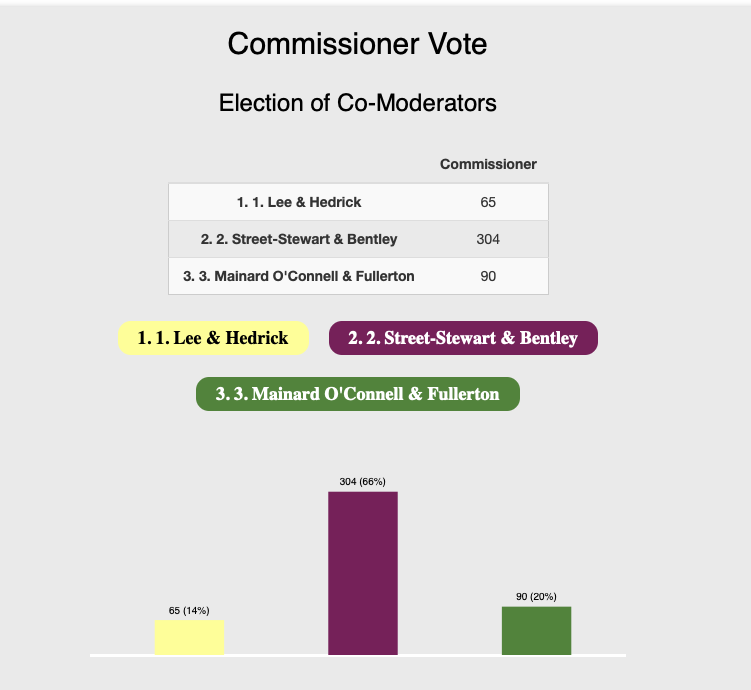 Announcing the results of the election, Cindy Kohlmann, who is co-moderator of the 2018 General Assembly along with Vilmarie Cintrón-Olivieri, choked up — she paused for a moment of grace to regain her voice.

“The blood of their ancestors has drenched the soil of this nation, yet you have called them to these positions of leadership, where once they were not welcome,” McCloud prayed during the installation. “Give them the wisdom and integrity and strength of past generations that they may lead the Presbyterian church.” 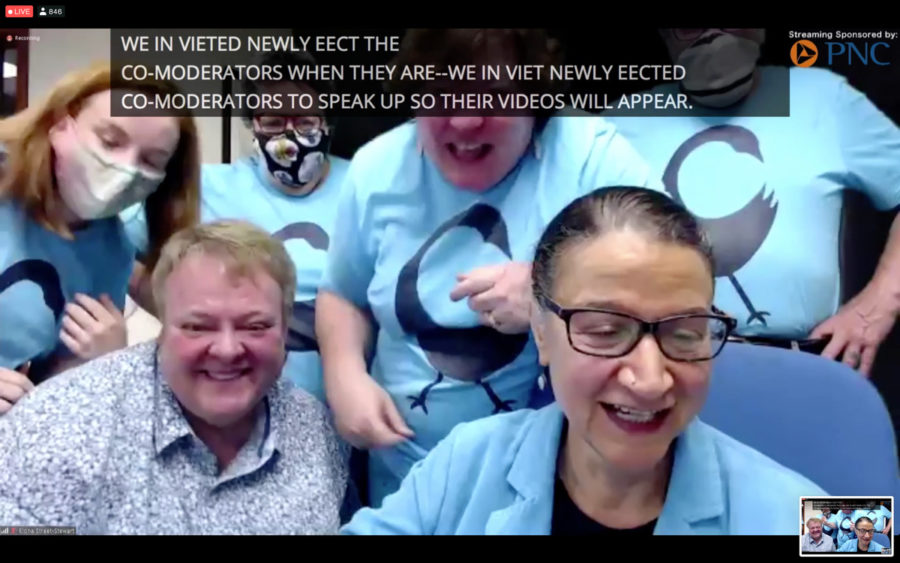 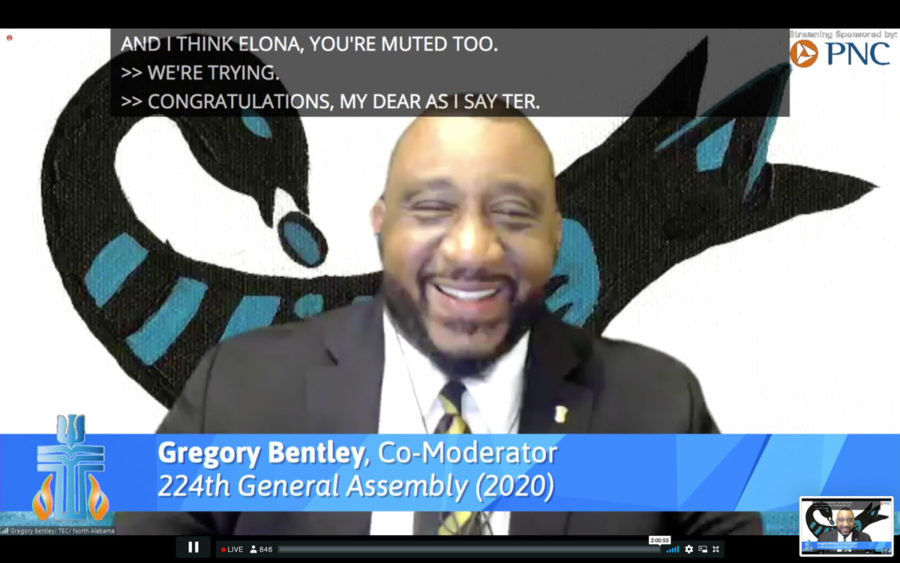 Their connection was palpable. “Thank you, my dear sister,” Bentley said repeatedly, when Street-Stewart passed him the ball in answering a question.

“We are a kinship in this kingdom – Alabama and Minnesota,” Street-Stewart told the assembly.

“Thank you, Jesus,” Street-Stewart said when the results were announced.

“Glory be to God,” Bentley added.

She is synod executive of the Synod of Lakes and Prairies, with 16 presbyteries, and Bentley pastor of Fellowship Presbyterian Church in Huntsville, Alabama. 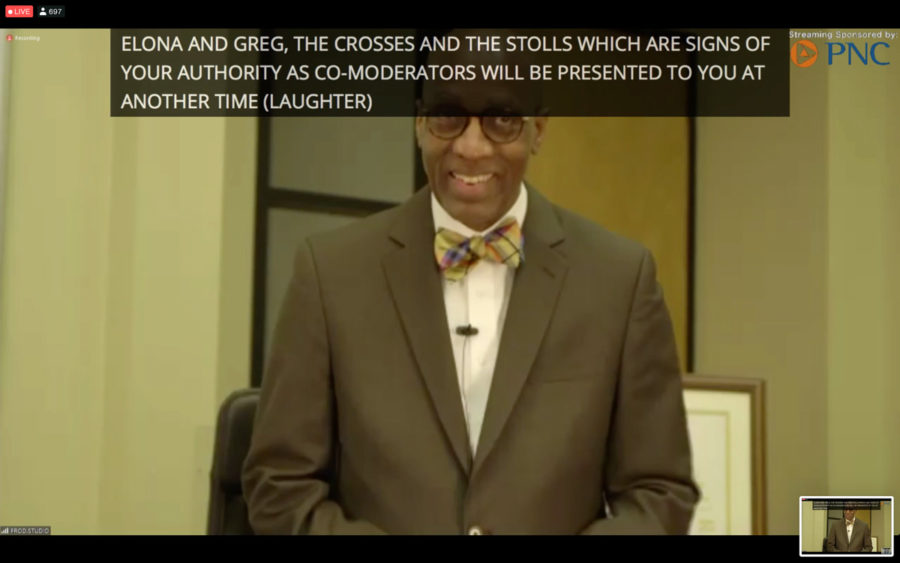 The PC(USA)’s stated clerk, J. Herbert Nelson, said they would receive their official moderators’ stoles later, since this assembly is meeting virtually. And their faces were filled with joy when Kohlmann asked them to look at a gallery view of the commissioners on the Zoom call – hundreds of faces of commissioners and advisory delegates, waving and smiling. “I love the church,” Street-Stewart said.

The election of co-moderators, as brightly as that event shines in the Presbyterian world, also took place in a much bigger context: against a backdrop of all that is happening at the same time in this nation.

At the exact hour commissioners were casting their votes, President Donald Trump was holding a re-election rally in Tulsa – the day after the Juneteenth commemoration and with the legacy of the Greenwood massacre of Blacks in Tulsa in 1921 hanging over it, and despite concerns about whether the rally might lead to a cluster of new COVID-19 cases.

The co-moderator election was preceded by about 45 minutes of questions and answers from commissioners – with all but one pre-recorded (commissioners had been invited to submit video questions in advance).

The questions commissioners presented reflected some of those themes of contemporary American life – particularly regarding racism and white supremacy – and the answers of those standing for the office expressed a hope for a Presbyterian church that is willing to change, to share power and to do the hard work of anti-racism.

Bentley and Street-Stewart also expressed strong support for the Matthew 25 initiative of the Presbyterian Mission Agency — with its commitment to congregational vitality, confronting structural racism and eliminating systemic poverty.

“The world needs a church that has no fear of diversity,” Street-Stewart said. She spoke directly of Juneteenth – in which “the message of freedom was delayed two and a half years so they could continue business as usual.” And in the mostly-white PC(USA), “many of us have persistently raised concerns” about equal access to opportunity, she said. “Can we pivot and recognize those who have not had leadership positions?” she asked. “This is hard work” that won’t happen quickly and requires training and support for Presbyterians who are being encouraged to move into leadership. 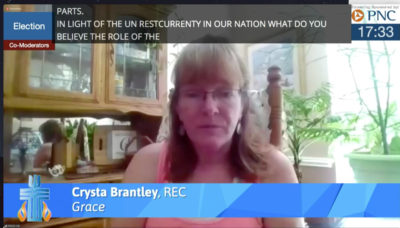 Bentley spoke of the need for radical hospitality — “not just being nice” or polite, but “extending yourself,” creating space so others feel “these people really want me here.”

Crysta Brantley, a ruling elder from Grace Presbytery, asked about the role of the Presbyterian Church regarding racism – and how local churches can address white supremacy.

“This question is at the heart of everything,” Street-Stewart said. The PC(USA) has confessional statements and a ministry of presence on racial issues, but “there is a lot of fear involved,” and whites need to be willing to give up power to make room for the gifts and leadership of people of color.

Hedrick, one of the other candidates, said “I am a person who has benefited from white privilege my entire life” — and said “the words white supremacy scare a lot of people,” but white pastors can lead the way by talking about their own privilege and by creating “a space for others not to be afraid to do that and not be afraid to take that risk.”

She urged congregations that aren’t sure how to address racism to “go ahead and get started.”

This is the third time a General Assembly has elected co-moderators (instead of the choosing a moderator and vice moderator, as previously was done). And it’s the first time one of the co-moderators is male — although, it goes without saying, plenty of men have led General Assemblies in the past.

The candidates spoke of other issues as well, including technology and the COVID-19 pandemic – with Mainard O’Connell repeatedly voicing concern for the needs of part-time workers and those in the gig economy. When Gracyn Ashmore, a young adult advisory delegate from St. Andrew Presbytery, asked how to make everyone feel welcome and feel the love of God, Fullerton, who is gay, answered: “Remember their name, call them by name, use the correct pronoun. How do we make everyone feel welcome? It starts by listening.”

And Moon Lee spoke of evangelism, saying: “We are called to share the contagious hope of Jesus Christ in a broken world.” 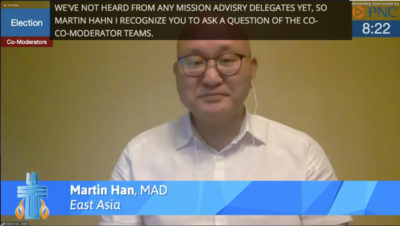 Only one question was asked without being recorded in advance – that by mission advisory delegate Martin Han of East Asia. Kohlmann and Cintrón-Olivieri had invited commissioners of color to submit questions from the floor – saying that all but one of the pre-recorded offerings came from whites.

Han asked the candidates to turn their attention from domestic concerns to international ones, “as the center of gravity of world Christianity has shifted to the Global South. And since mission is not unilateral but bilateral and multilateral, how can we learn from our sister churches around the world, in order to solve our domestic issues?”

Street-Stewart responded that farming communities from her synod have connected with agricultural businesses and women’s cooperatives in other countries, asking them to “tell us what you know. How can you guide us in learning new tools and new ways?”

Too often, “we’ve assumed a posture of superiority” in dealing with people from other countries, Bentley said. “We don’t want to create a charity situation,” but one of reciprocity.

And “the global church has a lot to tell us about getting out of the church building,” Mainard O’Connell said – saying that a “shadow gift” of the pandemic may be “catapulting us out of our church buildings” and into new ways of being church.

The election was not the only matter of business discussed during the June 20 plenary. Kohlmann announced that a motion had been filed to reconsider an action taken on June 19 — when the assembly voted 425-39 late in the evening to approve a list of business referrals (with some items being received by this assembly for information, others for action, and others being referred to the 2022 General Assembly).

Before that vote was taken, Kohlmann had informed the assembly that eight commissioners were in the virtual line wanting to make amendments — perhaps to ask that some items be taken off the list for referral to the assembly in 2022 and be taken up this year. The business this year is being restricted to “core and critical” items because of the constraints of holding the assembly virtually because of the COVID-19 pandemic.

But it was clear that some commissioners wanted to expand that list — maybe to include matters of social justice, or recommendations involving family leave policy for pastors, or climate change, or perhaps something else.

It was late in the evening, and the assembly had already been meeting for four hours via Zoom – so the commissioners voted 382-80 to end debate and not hear additional motions.

Kohlmann said a motion to reconsider that action of June 19 had been received, and would be taken up as the first item of business (after worship) when the assembly reconvenes on June 26. Worship will be at 11 a.m. EDT that day; the business session will begin at 1 p.m. EDT.

People can watch the proceedings either via the website for the 224th General Assembly or the Spirit of GA Facebook page.

with additional reporting from Jill Duffield