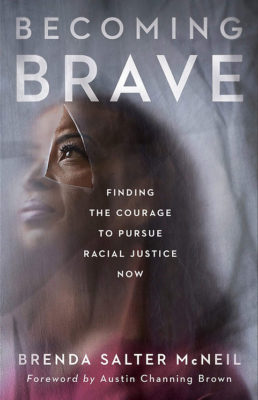 As a pastor, I spend much of my time trying to reconcile how a 2,000-year-old book relates to the world we live in today. I know that God is speaking to us even now through the ancient words of Scripture; the challenge is to faithfully discern what the message is in the current situation. This is why I am incredibly grateful that I was introduced to Brenda Salter McNeil’s book, “Becoming Brave.”

This unique book uses the biblical story of Esther to contextualize the call to stand up against racial oppression. Each chapter uses both the story of Esther and the author’s own personal experiences (from the perspective of a Christian woman of color) to frame one aspect of the call to action. McNeil calls special attention to the forces working against Esther and her courage to overcome them. In doing so, she encourages readers to look deeply at how they are indoctrinated – how family, church, cultural and societal structures have created fertile ground for racism to take root – and to begin to break free from the bondage of those racist restraints. This, she claims, is how advocates are born and is the point where we can begin to bring about change. McNeil does not shy away from the fact that becoming an advocate will involve great risk, sacrifice and some amount of failure, but points out that God is on the side of the oppressed and will empower the efforts of those who seek justice in every time and place.

McNeil points out that the work of racial reconciliation is largely happening outside of the church. This was a wake-up call for me, a person who is so immersed in the church that I often cannot see the bigger picture. She argues that Christians cannot preach about Jesus without preaching about justice. While this sounds like common sense, the truth is that both pastors and parishioners are struggling with fear of speaking up — fear that we are too powerless, small, unimportant, wounded and flawed to be advocates for change.

While not exactly an exegesis, this book dives deeply into the story of Esther to find direction for Christians who are brokenhearted over the treatment of God’s children of color. McNeil unpacks Esther’s story to show how she was all of those characteristics but had one very important quality which overcame all the obstacles: her bravery. The book will embolden Christians to step into the journey of reconciliation and call churches into action. If Esther teaches us anything, according to McNeil’s book, it is that bravery comes not from the absence of fear but from the courage to fight oppression in the presence of it. Justice in the kingdom of God simply cannot wait, and McNeil reminds us that Esther is our example and that we were called for such a time as this. This is a must-read for anyone who finds that their voice quavers in fear when speaking up about racial justice for the sake of the gospel.

Katina Sharp is the pastor at Powell Presbyterian Church in Knoxville, Tennessee, where she lives with her husband Mike, their four sons and their two huge lap dogs.