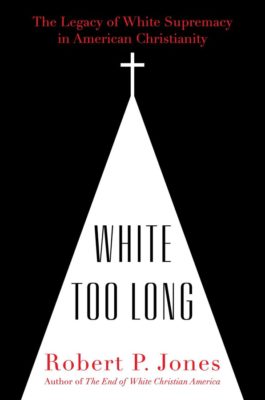 Robert Jones, the founder and CEO of the Public Religion Research Institute, writes from the perspective of history, theology and current public opinion survey to illumine the unsettling truth of American Christianity’s relationship with white supremacy. Jones, a son of the American South who was raised in the Evangelical tradition, also writes this book as part-memoir, sharing his journey and his own coming to grips with the legacy of racism that continues to exists in all sectors of the American church, including mainline Protestantism and Catholicism. Jones states the proposition of “White Too Long” succinctly, writing, “It is time – indeed well beyond time – for white Christians in the United States to reckon with the racism of our past and the willful amnesia of our present.”

The book is cogently organized and clearly addresses the author’s essential proposition. In chapter titles (Seeing, Remembering, Believing, Marking, Mapping, Telling and Reckoning), Jones leads the reader on a journey. The first step on the journey is to recognize the current moment and open our eyes to the historical truth of American Christianity’s complicity in white supremacy. Jones then masterfully looks at the theology of Christianity in the United States and how it has played a part in the establishment of white supremacy. Then from the Reconstruction era, to the Jim Crow era, to the civil rights movement and into the present day, the author tells how the monuments and symbols of white supremacy have been, both consciously and unconsciously, embraced by white Christians to maintain the status quo of white dominance. In the chapter “Mapping,” Jones draws on his special knowledge of opinion research to elucidate how racial biases continue to tenaciously manifest themselves in the thoughts and opinions of Christians in America today.

Most hopefully, in the chapter on “Telling,” Jones gives some signs of a better future for the nation and the church. He is clear that there is still much work to do, but in the examples he gives, he sees harbingers of healing. One the most moving stories Jones shares is that of his return to Macon, Georgia — his city of birth and where generations of his own family resided. There are two First Baptist Churches in Macon — one white and one Black. Jones tells how these two congregations, with the leadership of the pastors, are committing to the hard work of racial healing — coming to grips with history, and building bridges to reconciliation and repair. This story was so moving that if there was any way to improve on Jones’ book, it would be to include other stories of churches doing this difficult but essential work.

Jones closes his book with a chapter titled “Reckoning,” where he lays out the challenge of not only reconciliation, but repair and restitution, for the damage white supremacy has inflicted on individuals of all races, the church and the nation. It is a call to justice in the midst of ongoing injustice.

This is a book so timely that every American Christian should read it. In the wake of the January 6 assault on the U.S. Capitol, where the Confederate battle flag was hoisted proudly by white supremacists, it is especially urgent that Christians of good faith acknowledge our own historical and theological responsibility for where we are and how, by God’s grace, we might find a better way forward.