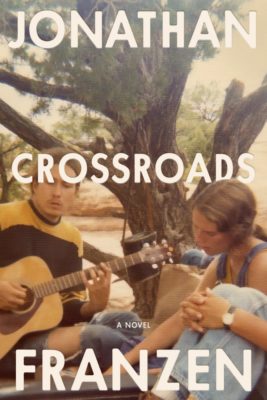 Like John Updike, novelist Jonathan Franzen claims as his territory the American family, but as a lens into broader society and the currents swirling in and through it.

In this case, it is the family Hildebrandt, made up of Russ and Marion and their four children. The date is 1971. The locale: a Chicago suburb. And — new for Franzen — the Hildebrandts are a clergy family. Russ is the associate minister of a large suburban congregation. He itches for a church of his own. But even more, he longs to sleep with an alluring widow in the congregation, Frances Cottrell.

Among Franzen’s many gifts is his ability to get inside the heads and hearts of his characters, which he does with each of the Hildebrandts (excepting the youngest, 9-year-old Judson or Jay) in alternating chapters.

The novel takes its title Crossroads from a huge (140 kids), popular youth group at the vaguely named “First Reformed Church.” This was a time when church youth groups, powered by the baby boomer generation, were big.

It was the era – perhaps, by 1971, near the end of that era – of the “sensitivity” or “encounter group” of “authenticity,” and of youth spurning adults (“Trust No One Over 30”), other than a chosen few “cool ones.” Russ, alas, doesn’t make the cut. He is “excommunicated” from the group because, way too earnest, he can’t manage to pull off either cool or authentic. His place is taken by a younger, smoother and more psychologically adept minister, Rick Ambrose — a onetime disciple of Russ who Russ comes to hate.

But the central character of Crossroads is neither the reverend nor any of the three elder Hildebrandt children. It is Marion, Russ’s wife. At the start, she is a frumpy, 50-ish mom. But Marion turns out to have quite the backstory. We meet her as a full-on pastor’s wife (writing or rewriting Russ’s sermons), attending obligatory social engagements, trying unsuccessfully to take off the thirty pounds the years have added, all the while mothering three very different and challenging teenagers.

But before that, unknown to either Russ or her children, Marion had been caught up in an obsessive affair with a married man, had an abortion, been a rape victim, spent months hospitalized for mental illness and found God in a Catholic Church, whose doctrine she largely disagrees with. With various members of her family crashing and burning around her, Marion wages a war of reclamation beginning with herself. She is not driven — as one might expect — by appearances, but by an unsentimental love. In the end, Marion seems the most authentic and clear-sighted of the lot.

“Crossroads,” of course, is more than the name of a church youth group. It is a metaphor for the crossroads at which various characters and institutions stand. Not by accident, the climactic events of the novel take place on a church mission trip on the Navajo lands in Arizona. This introduces themes of people of color rising against White cluelessness and presumption, as part of the reckoning. The civil rights movement of the 60s and women’s movement of the 70s were also roiling the post-war consensus and complacency.

Looking back, the early 70s do seem a turning point writ large for American culture. It is, in retrospect, as if we came to a crossroads in our nation’s life. The then-dominant mainline Protestant Church was five years into an unsuspected, and unnoticed decline — one that continues to this day. The era of a widely shared (White) middle-class prosperity is about to end in an oil embargo, recession, union-busting and an emerging “global” economy. No one sees that coming either. Watergate’s dirty tricks are a year away. The Roe v. Wade decision comes in 1973, galvanizing a conservative religious movement that changed America.

The youth culture of the late 60s, heralded in books like The Greening of America, is by the early 70s devolving into drug culture and an epidemic of disillusionment and divorce. The America Franzen describes in Crossroads is one that hovers, unsuspecting, on the edge of fracture, disillusion and decline. As a nation, we peaked, at least in terms of power, reputation and unity, in the post-war period, that time after “the good war.” By the 70s we, like the Hildebrandts, were coming unmoored. Old verities no longer held. Heroes weren’t what they used to be. Winner-take-all was becoming the new and prevailing ethic. Like Marion, we have been unable to stem that tide. But maybe we have, again like Marion, been pushed to greater depths of honesty, and pressed to find what remains when the illusions are gone.

Presbyterian Outlook supports local bookstores. Join us! Click on the link below to purchase Crossroads from BookShop, an online bookstore with a mission to financially support local, independent bookstores. As an affiliate, Outlook will also earn a commission from your purchase.

Anthony Robinson is a UCC minister and author of 13 books, most recently Useful Wisdom. He lives in Seattle and blogs regularly at anthonybrobinson.com.