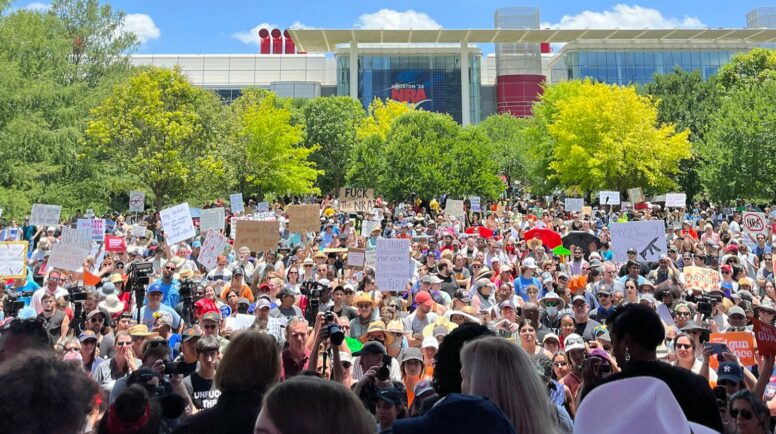 Demonstrators gather at Discovery Green Park as the National Rifle Association holds its annual meeting at the George R. Brown Convention Center, May 27, 2022, in Houston. RNS photo by Katherine Keenan

HOUSTON (RNS) — Hundreds of demonstrators gathered under the scorching Texas sun Friday (May 27) to protest outside the National Rifle Association’s annual meeting, just days after 21 people died in a school shooting in Uvalde, Texas, that has reignited a national debate on gun rights.

Among the 500-strong crowd of activists, teachers, politicians and citizens outside the George R. Brown Conference Center were scores of interfaith leaders who sought to add the religious community’s voice to the protest of the shooting at Uvalde’s Robb Elementary and to condemn gun violence in general.

Scheduled speakers at the conference included former President Donald Trump, Sen. Ted Cruz and other politicians, as well as NRA officials. On Thursday, Gov. Greg Abbott announced he would skip the conference in favor of visiting Uvalde.

“Gun violence affects all of us,” Megan Dosher Hansen, one of two Houstonians who organized the interfaith demonstration, told Religion News Service. “Too often houses of worship, especially those of nonmajority religions … have been the targets of mass shootings and other acts of violence. … The lives of all people living in the United States can be touched by gun violence on a personal level.”

Streets surrounding the area were closed off and mounted police kept protesters and counterprotesters on opposite sides of Avenida de las Americas, which divides Discovery Green Park from the convention center. The two sides yelled insults, as the interfaith clergy began to march on the blocked-off street between the park and the convention center, flanked by vehement protesters on one side and guarded conference-goers on the other.

The scene became heated as interfaith community leader Teresa Kim Pecinovsky, crossing toward the convention center, was restrained by a security officer. Pecinovsky, who is four months pregnant, was shoved back behind a barrier and later taken to the Woman’s Hospital of Texas as a safety precaution.

“We were told that we could go across individually,” said Lynn Hargrove, general presbyter of the Presbytery of New Covenant, who witnessed the altercation. “There was an opening, the security guard grabbed her, and she tried to get away and then he grabbed her harder and ended up shoving her back across the line.”

Houston Fire Chief Samuel Peña held a news conference on Thursday in part to warn those who planned to attend the protest against clashing. “This is the most diverse city in the country. Certainly, we can get together in a crowd, exercise our First Amendment rights and do so respecting each other’s views,” he said.

After the incident, the interfaith community finished its march and gathered under a shade tree for speeches from representatives of Christian, Muslim and Buddhist communities.

After solemnly reciting the names of the victims killed in Uvalde, the Rev. Raphael Villareal Falquez, a hospice chaplain, gave a prayer in Spanish. Behind him, the Rev. Ashley Dellagiacoma of Lutheran Kindred Church stood defiantly holding a sign that read “Let there be peace on earth and let it begin today.”

“We’re all looking for a way to respond to our grief and our frustration and reconcile that with who we are as people of faith,” Dellagiacoma said, who also acknowledged that she owns a gun. “I think we have more that we share than we truly disagree about. I own a gun. But how do we hold those pieces of ourselves (and) the lives that it costs us to value that above all else?”

Some among the interfaith group spoke of membership in the NRA as akin to sin.

“I would say that If you wake up every morning claiming to be a Christian and you are a member of this organization that you need to repent,” said Jerry Maynard, a faith-based activist who calls himself “the People’s Priest.” “You cannot create peace with a gun.”

On Wednesday, the day after the shooting in Uvalde, the NRA issued a statement condemning the violence, which was committed by a lone, 18-year-old gunman, and urged redoubling efforts to make schools more secure.

But the interfaith leaders outside the conference encouraged anyone in earshot to identify with their cause and call on elected officials to enact gun reform.

“Our hope is that the public outcry will generate legislation that requires universal background checks and ban on assault weapons,” Dosher Hansen said. “We also hope that the participants in this and other protests who have not been engaged in this issue before will go home and have real conversations about gun violence (and) our complicity in gun culture.” 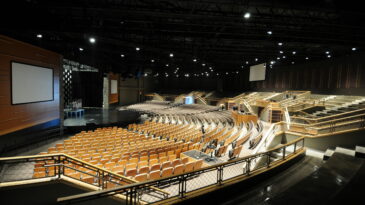