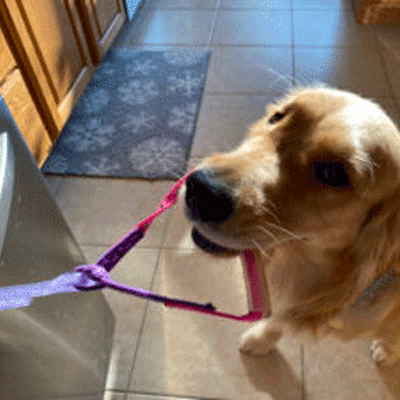 One of Brinley’s many skills is opening the freezer door. (Contributed photo)

After leading the congregation in prayer, the Rev. Dr. Greg Bolt knelt next to the golden retriever in her blue and white service dog jacket.

“Brinley, God has given you a calling to help a person in need with tasks of daily living, companionship and love. We give thanks for you and your willingness to serve, and to help. May your example inspire us to help and to love more in our daily lives. Brinley —” The dog placed her paw over Bolt’s arm and gave him a kiss. “You are commissioned to service.”

Having a service dog in training at worship and church activities, and commissioning that dog to assist someone living with a disability, is the norm at First Presbyterian Church in Red Wing, Minnesota. It’s become part of the church’s welcoming spirit and practice.

“It’s become part of the ethos of our congregation that you will be welcome no matter who you are,” Bolt said. It’s a particularly visible welcome for those with disabilities. “People walk in and see the dog and can see that.”

It’s also part of church member Jane Ward’s longstanding work training dogs for Helping Paws, a Hopkins, Minnesota-based nonprofit that breeds, trains and places service dogs with people who need them. Brinley, the dog who was commissioned in May, now lives with a woman with mobility issues, riding the light rail with her to work and back home. This is the second dog that the church has commissioned for Ward, who hopes to begin training a third dog soon.

A rigorous path to service

A service dog receives training to assist people with physical disabilities, veterans and first responders with PTSD and others with specific daily living tasks. The Americans with Disabilities Act grants service dogs access to places such as offices, restaurants and airplanes. Therapy dogs and emotional support dogs do not have the same type of training or legal access as service dogs.

These daily tasks can include walking, waiting, helping a person dress, putting items away, turning lights on and off, helping a person who has stumbled get up, and more. Dogs must be comfortable traveling and able to get along with other animals and humans in the home.

“They need to be able to learn and adapt to most anything,” Ward said.

For the final exam, dog and handler are tested at a shopping center, starting in the parking lot. “Somebody watches you unload your dog. If they jump out of the car before you call them, you fail,” Ward said.

Further tests include distracting dogs and grabby kids. At the food court, handler and examiner sit down. The dog lies down with nose and paws pointed out from the table. After a few minutes of conversation, the examiner drops several marshmallows off the table, one by one. They may land on or right in front of the dog, but if the dog eats even one, it’s a fail.

Not everything, of course, can be taught.

Ward’s previous dog, Peyton, went to a veteran who lives with PTSD. The veteran told her that one day some kids set off fireworks right behind where he was standing. The smoke in the street — followed instantly by his racing heart — put him right back in Afghanistan. Peyton looked at the man, cocked his head, then went over and leaned against his leg.

People often ask how Ward can let a dog go after raising and training him, she said. Examples like these are why she does what she does.

Brinley, commissioned in May, originally lived and worked with another trainer. Then Covid hit, and in-person training suddenly had to go virtual. That didn’t work so well for Brinley, and she fell behind. When Brinley was reassigned to Ward, the young dog knew only eight to 10 of about 80 required cues.

“They didn’t think she was going to graduate,” Ward said.

She made the virtual training meetings work for Brinley.

“(The dogs) just want to be loved, and to please you,” she said. “You just have to find the right motivation for them to do things.”

A regular at church

Helping Paws service dog trainers are required to take their charges three places each week, though Ward usually exceeds this.

With husband Ron busy in the choir, she often serves as a greeter at church along with whatever dog she is training. Brinley became known for her door-opening skills.

“Brinley did not like the organ, but she tolerated it,” Ward said. “She much preferred the piano.”

Unlike therapy dogs, service dogs can’t be petted. This is hard for the kids in the congregation, but they learn and come to appreciate a service dog’s role, Bolt said.

When Ward takes a dog with her to meetings, the dog lies quietly under or beside her chair. “People tell me it makes the room relax to have the dog walk in and be there,” she said. “Even though they’re not allowed to interact with the dog, it changes the tone.”

Greg Bolt has been co-pastor at First Presbyterian Church with wife Heidi for five and a half years. Ward approached the two about commissioning her previous dog, Peyton, for his new job. Heidi found few resources on blessing service animals, but she put a commissioning together.

When Brinley was ready to be commissioned, it was her husband’s turn. “Heidi got to do it last time, so I made sure I got to do it this time,” Greg Bolt said.

In-person worshipers were still few and distanced, although Greg Bolt did invite the children to come forward to lay hands on Brinley during the commissioning. He invited those in the pews and online to reach toward Brinley as well. “This is a thing we do now,” he said.