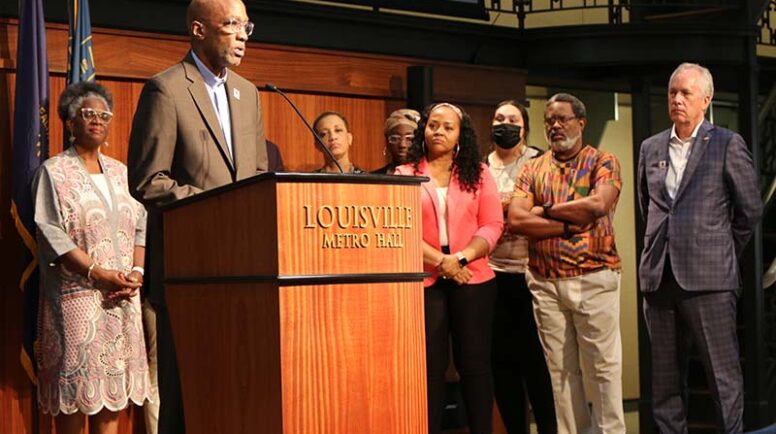 The Rev. Dr. J. Herbert Nelson, II spoke at a Louisville news conference regarding the city’s plans for a Juneteenth Jubilee Celebration the week of June 11–19. Photo by Rick Jones.

A local commission has been working with the PC(USA) and other community organizations to plan a series of activities and events to be held June 11–19. The commission chose the theme “Our Story, America’s Glory.”

“Our dedicated commissioners and community partners have been tirelessly working on providing educational and creative outlets to honor the importance of Juneteenth,” Mayor Fischer said. “I truly appreciate their partnership and their thoughtful organization of this special week of activities.”

Among the planned events will be a visual arts day camp for children ages 7–12, a luncheon sponsored by the local human relations commission, and a number of activities for youth. There will also be a Juneteenth walk/run scheduled in honor of Breonna Taylor, the 26-year-old Louisville woman shot and killed by police during a raid on her home in 2020. Her death led to more than 100 days of community protests in the city.

The jubilee will be closing as the hybrid gathering of the 225th General Assembly of the Presbyterian Church (U.S.A.) will be opening in Louisville. On Sunday, June 19, Nelson will be preaching for the service and Mayor Fischer is also scheduled to speak.

During the news conference, Nelson said this is a time to celebrate and reflect.

“We celebrate the opportunity of freedom on one end, but we are also reminded that the church has a calling and that calling is to continue to press for the freedom of individuals who have been left behind even in present day,” he said. “To be able to walk faithfully in communities with hope and possibility rather than places of struggle and despair. One of the first orders of business is to worship together, to remember and repent, even in the life of the church. It’s the right and sacred thing to do.”

Juneteenth is the oldest known holiday commemorating the final communication of the abolition of slavery in the United States. Observed on June 19, the holiday originated in Texas in 1865 when soldiers notified residents of the end of slavery nearly two years after the signing of the Emancipation Proclamation.

The Juneteenth Livestream can be viewed at https://ga-pcusa.org/  or the Spirit of GA Facebook page,  https://www.facebook.com/spiritofga.