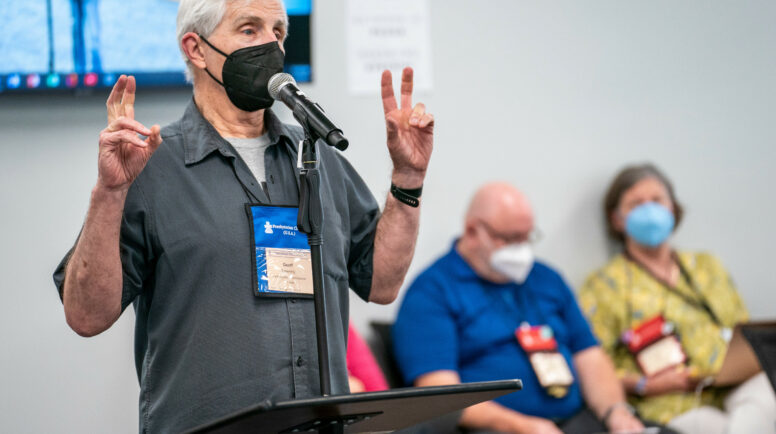 Louisville, Kentucky – The co-moderators of the 2022 General Assembly should appoint a Funding Model Development team “to develop, recruit, implement, and provide oversight of possible funding model experiments” for the Presbyterian Church (U.S.A.) — in other words, to explore possible alternatives to the current per capita funding system. At least, this is what the Financial Resources Committee voted on July 2 to unanimously recommend to the assembly.

The recommendation came from FIN-10 — essentially upholding the second recommendation from the Special Committee on Per Capita Based Funding and National Church Financial Sustainability, with some amendments to the timeline for reporting and proposed team membership.

On July 1, the Financial Resources Committee voted on the Special Committee’s first recommendation — which asked the assembly to create a commission to unify the Office of the General Assembly (OGA) and the Presbyterian Mission Agency (PMA). They chose not to unify OGA and PMA, asking the assembly for a task force instead.

At the heart of this issue: questions about whether the current per capita funding system is sustainable long-term in a denomination with declining membership and where OGA, which is responsible for putting on the General Assembly, ecumenical relations and other ecclesial functions of the PC(USA), already is feeling financially stressed.

Kerry Rice, deputy stated clerk, said OGA expects to exhaust its reserves beyond the required minimum by the end of 2024.

The 2018 General Assembly created the Special Committee, in part, to respond to mid council leaders who spoke about the intense financial pressure that some presbyteries and small congregations, some of which can’t afford to hire pastors, are feeling.

Per capita funds nearly all of OGA’s budget, and increases in per capita hurt other types of giving, the Special Committee has reported.

“There is a correlation between increases in per capita and a decrease in Mission Giving” to PMA, Valerie Young, co-moderator of the Special Committee, told the assembly committee July 1. “When per capita goes up, mission giving goes down.”

And Laura Cheifetz, the special committee’s other co-moderator, said: “While some have commented that we should have focused on increasing membership, we were aware that particular angle was outside of our charge, and truth be told, we do not prefer to speak of ‘increasing membership’ as if we were a subscription service. We are not Netflix. We do not believe that our primary mission as a church is to seek unending growth, as though it were the best measure of faithfulness. We are seeking faithfulness with who we are and what we have already above all else.”

As part of its report to the assembly, the Special Committee included a “Handoff Handbook” — explaining the work the committee has already done to consider possible funding experiments  and intending to provide guidance to any team that might take up the next stage of the work.

The Financial Resources Committee discussed the possibility of speeding up the timeline of developing and presenting alternate funding models. “I sense some urgency around this,” said Geoff Browning, a minister from the Presbytery of San Jose, who proposed an amendment that the Funding Model Development team would report back to the General Assembly in 2024, not 2026. “We want to see some real movement,” Browning said.

But that amendment failed, after Young explained the complexity of the work and the challenge of trying to move too quickly.

“I appreciate the intent to hurry this along,” Young said. “I fear there may be some confusion” about all that’s involved. To find presbyteries “who are willing to take a chance and be brave and to experiment and gather the data all in two years, is difficult.” A timeline of finishing the work by 2024 “is not really realistic,” she said.

One possibility might be to use a percentage model — a presbytery would collect some percentage of a congregation’s income to support the work of OGA, rather than per capita, Young said.

The new team would need to find a few presbyteries willing to do that, and to ask their congregations to participate. The funding model experiment would need to get specific — to say what percentage of a congregation’s income and what types of income it would include.

“There’s a lot involved,” both logistics “and also buy-in for the experimentation,” said Young, who is a synod executive. “I truly believe the majority of mid council leaders … see a need for this — and yet, experimentation is difficult. It’s hard. It’s change. … That is going to take time.”

The Financial Resources Committee ultimately voted to recommend that the team would report back to the General Assembly in 2024 on their progress and “their prospects for finishing their work” and to make a final report to the assembly in 2026.

It also changed the proposed composition of the new team to include a representative of either the Racial Equity Advocacy Committee or Advisory Committee on Social Witness Policy, “so that the core values of these committees will be included.”

Budgets. The committee also heard presentations on – but did not vote on – three budgets the 2022 General Assembly will need to approve. Those are:

After hearing presentations on these budgets and having a chance to ask questions, the committee recessed until July 9 — the final day of the assembly. It will wait until then to vote on the budgets, because actions the assembly might take in plenary could have financial implications that would affect the budget and require revisions, including potentially of the per capita rate.

One commissioner asked, for example, if there’s money in the budget for an in-person General Assembly in Salt Lake City in 2024. The General Assembly Ministry Coordination Committee is recommending a different approach — Plan Omega, with online committee meetings and in-person plenaries, with an estimated cost of $2.82 million. But Rice said the per capita budget includes a higher amount – $3.6 million – in case the assembly decides in plenary to go with a totally in-person assembly. Once the assembly makes its decision, the budget will be adjusted as needed before the Financial Resources Committee meets again on July 9.

In response to a question about the impact of the COVID-19 pandemic on anticipated giving for 2023 and 2024, Ian Hall, chief financial officer and chief operating officer for the PC(USA), A Corporation, said the denominations budgets traditionally have been built with conservative income projections and liberal expense projections. For 2023 and 2024, “the same conservative approach to budgeting revenue has been applied.”

Committee members also requested that, in the future, budget documents include not just the amounts requested for the next two years, but comparative numbers from the current budgets, so they can more easily see the changes.

The per capita rate increases recommended total 7% for 2023 and 7% in 2024, Rice said —adding that OGA “wouldn’t bring [the increase request] to you” unless we thought it was necessary to do the required work.