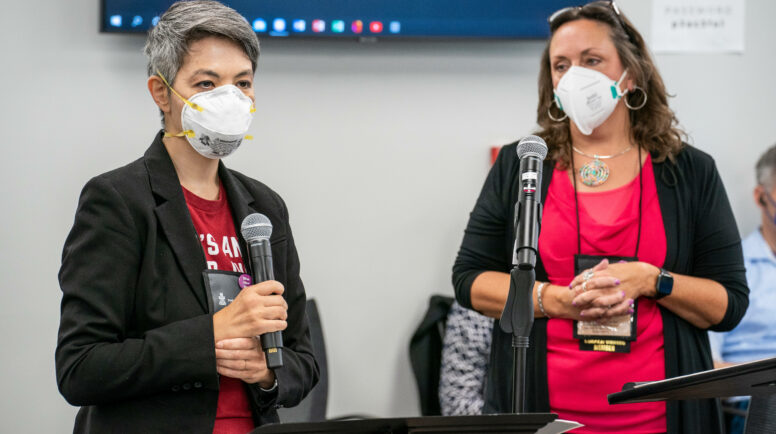 While that vote on FIN-10 might not mean a lot to Presbyterians in the pews, it should.

And the Office of the General Assembly (OGA), which depends almost solely on per capita funding sent from congregations via the presbyteries, is set to deplete its reserves by the end of 2024.

After listening to more than 100 mid council leaders, “we know there is a need for a new funding model,” said Valerie Young, co-moderator of the Special Committee on Per Capita Based Funding and National Church Financial Sustainability, a special committee the General Assembly created in 2018. “As membership goes down, per capita goes up. … Our current funding model is strangling our churches, and has a significant negative impact on small congregations.”

That’s where church politics got real.

On July 1, the assembly’s Financial Resources Committee voted to create a task force rather than a commission. This is notable because a task force does not have the power to act on its own. It can only make recommendations to the next assembly. A commission can act on its own. The Special Committee wanted a commission, with more power. The Presbyterian Mission Agency (PMA) board did not.

On July 8, by a vote of 321-54, the assembly voted to switch course and to support the Special Committee’s recommendation. This happened after Alice Tewell, a minister from National Capital Presbytery, presented that approach as a substitute motion.

The assembly also voted 344-12 to support a second recommendation, to create a Funding Model Development team “to develop, recruit, implement, and provide oversight of possible funding model experiments” — with more details to be found here.

It also voted to add two young adult advisory delegates to both groups.

In presenting their committee’s report to the assembly, Young and Laura Cheifetz, co-moderators of the Special Committee, made it clear to the commissioners the political pressure they have felt to soften their recommendations.

“Extraordinary effort went into getting the special committee to alter our recommendations after the report had been drafted, and before the assembly had begun,” Cheifetz told the assembly. “We have been asked to obfuscate and to be less direct about our findings. Things have been said and people have been hurt. Why is a system seeking to be led by the Holy Spirit so afraid of change?”

She described the pressure as “evidence of further pushback of a fearful system.”

And Young said: “We did not pick data to support our conclusions.” The team she led spoke to more than 100 presbytery and synod leaders, and “we allowed the data to lead us to our conclusions.”

“We ask that you make your decisions based on understanding the information available to you and the movement of the Holy Spirit among you, and not on innuendos and threats. Threats are a part of a fearful system pushing back against much needed and urgent change.”

Warren Lesane, chair of the PMA board, told the assembly that the PMA board favors a task force, and warned that “a commission could very well disable and cause the Matthew 25 effort to go off-board.”

Gregory Bentley, co-moderator of the 2020 General Assembly, spoke in favor of a task force rather than a commission, saying that with President and Executive Director of PMA Diane Moffett and Stated Clerk J. Herbert Nelson, who also leads OGA, “we have two dynamic effective, and innovative leaders” committed to working together. With that kind of leadership willing to work for unification, “a commission is wrongheaded and heavy-handed,” Bentley said.

Bentley also told the assembly that he is joining the PMA board in August.

The Committee on the Office of the General Assembly (COGA) has been put in a difficult spot – caught by surprise when Nelson told the assembly’s Financial Resources Committee on July 1 that he supports a task force, not a commission – citing his close working relationship with Moffett and his trust in her. Nelson’s recommendation is contrary to COGA’s. Part of COGA’s concern: worry about how the funding crunch is impacting the work capacity and morale of the OGA staff.

“It’s worth interrogating why one agency with more flexibility and fundraising, a larger budget, more human and financial resources, is resistant to the idea of a commission, and would rather do the work of unification without other input and voices beyond the two agencies. While the other agency, with a fixed and diminishing funding source, smaller budget, smaller staff, is asking for broader inclusion. The one not receiving an equitable share is the one asking for help.

“We specifically support a commission over a task force because we know that goodwill and strengthening relationships, no matter how strong or well-meaning, simply aren’t enough to effect change in a complex system with a history of conflict. We are grateful that the clerk and the president have pledged to work together. It will be a tremendous help. But all of us know … how extremely difficult it is, if not impossible it is, to change systems just by changing the people in the systems. Years of observation, studies and task forces have noted that this agency situation needs to be unified in order to provide equitable sharing of resources at the national level.”

Lydia Grace Gray, a minister from Whitewater Valley Presbytery, supported the idea of a commission. “These restructuring deliberations have been kicked down the road over and over again,” Gray said. “We need a commission with authority to make change, and not just a task force with more powerless recommendations.”

Following the assembly’s vote, Moffett said in a brief interview that “the Presbyterian Mission Agency is ready to work with the commission and the assembly and OGA and whoever else we need to work with, to make sure that the mission of the church goes forward. We welcome this creative time. We have all prayed about this. So this is the desire of the assembly, and we are going to make it sing.”

And Nelson said: “The commissioners have made their decision. We’ll work with them to make that happen, as best we can. It’s in the Lord’s hands. … I’m OK with that.”

*Information for this story was also gathered by Gregg Brekke.