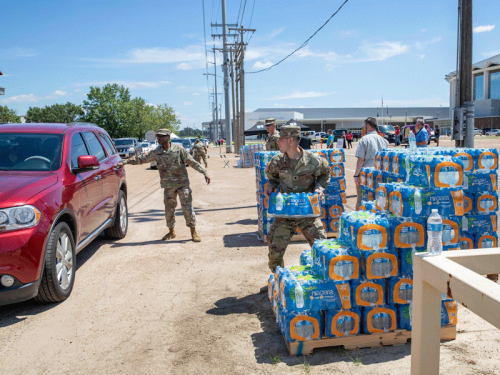 Nearly 600 members of the Mississippi National Guard set up at seven sites around Jackson, where they distributed bottled water and provided non-potable water from water trucks to help relieve some of the effects of the water crisis in the city. (Photo courtesy of the U.S. Department of Defense)

(PNS) — If you live in an area with safe, clean drinking water, it’s easy to forget how integral that water is to daily life — until you hear about a place like Jackson, Mississippi, where residents are in the grips of an intractable water crisis that has captured international attention and left them under a boil water advisory for weeks.

Susan Sumrall, Stated Clerk of the Presbytery of Mississippi, lives outside Jackson but receives Jackson water.

“Our water is about the color of a cardboard box,” she said. “They tell us not to water our plants, not to give it to our dogs and cats and other pets unless it’s been boiled, and don’t brush your teeth with it. Don’t wash your face with it.”

Furthermore, “we’ve also got lead in the water — it’s leaching from the pipes — so it’s a double or triple whammy on us.”

So, the boil water advisory is just one aspect of a water crisis that came to a head in late August when complications from Pearl River flooding prompted Mayor Chokwe Antar Lumumba to declare a water system emergency. At that time, water pressure issues at the O.B. Curtis Water Plant had left many people with no water due to low water pressure.

It was a flashback, of sorts. “Last January/February of 2021 when we had the ice storm that crippled Dallas and all that, we were six weeks without good water then,” Sumrall said. “So, it’s just lack of maintenance in the water treatment plants, lack of enough personnel to appropriately staff it, and then you get a flood and you get overwhelmed and you get parts going down. It’s just a real bad situation.”

After an outcry that has drawn the attention of President Biden and others around the country, teams of operators, mechanics, instrument technicians and maintenance people from multiple states are now on site to work on issues, and water pressure has been stabilized. But the saga continues, with no definite end in sight.

Some residents and activists have grown frustrated with the situation. There have been problems and boil water notices off and on for years, including July 29, and insufficient action by state officials has contributed to a feeling that the predominantly Black city has been wronged, said activist Danyelle Holmes, who is among those pushing for a permanent solution to the water crisis. She is part of the Mississippi Rapid Response Coalition, a grassroots group that has been distributing bottled water since before the state of emergency. She’s also a national organizer with Repairers of the Breach, the parent organization of the Poor People’s Campaign.

“Time after time, we’ve been let down or people have dropped the ball” on addressing the water issues, Holmes said. There’s been a lack of urgency about the need to ensure that Jackson has “clean and safe drinking water, and so we’re going to keep fighting. We’re not going to accept [a bandage] on a broken system. We need it to be fixed 100% and our demand is to fix it now.”

NBC News reported that a team from the Environmental Protection Agency’s Office of Inspector General has arrived in Jackson to begin a thorough review of the situation.

“The last 10 years we’ve been dealing with mechanical failures and probably even long before,” said Holmes, who blames, in part, state government that she believes has been insensitive to the needs of low-income people and persons of color on many policy issues.

“This is environmental racism, structural racism, blatant racism,” Holmes said. “We just have to be clear and name exactly what it is … and we’re seeing that extreme racist politics have played a significant role in the demise of Jackson’s infrastructure.”

The Rev. Joel Alvis, interim pastor of Fondren Presbyterian Church in Jackson, who recently relocated to the area after having been away for some time, said the infrastructure is “very, very bad,” and he is agitated that the situation has reached this point.

“This is the capital city of one of the 50 states in the United States, and it’s mind-boggling to me that this has been allowed to come to pass,” said Alvis, who grew up in Jackson and is coordinating with Presbyterian Disaster Assistance and the Presbytery of Mississippi on the humanitarian response. “My heart breaks for the city.”

Alvis also worries about the future. “My fear is that people will, once the immediacy of the news goes away, they’ll just forget” about Jackson, but “this is a place that is going to need a lot of attention.”

The Rev. James Kirk, PDA Associate for National Disaster Response, lamented that “it’s a crisis that didn’t have to happen.” He stressed the importance of people being allies to the residents of Jackson who feel abandoned or are asking, “Where were our elected officials when we needed them?”

Lumumba has said that the problem is bigger than the city has the capacity to fix alone, estimating that it could take billions of dollars to fix. Holmes is cautiously optimistic, based on some comments from an EPA administrator, that the city will be able to access much-needed federal funds.

Meanwhile, people are suffering, despite water distribution from the National Guard that is not always enough to take care of people’s family and health needs, Holmes said. She is particularly worried about people who have certain medical conditions to care for.

“We’re actually seeing the impact — individuals that are actually putting this water on their open (diabetic) wounds and becoming infected,” she said.

PDA has provided an initial assistance grant to the Presbytery of Mississippi, in addition to deploying a National Response Team member, and continues to monitor conditions in Jackson.

“PDA has been in touch with Presbyterian congregational leadership as the situation unfolds, and PDA stands ready to partner with the presbytery as unmet needs are identified,” Kirk said.

Alvis said conversations are ongoing about how to best use the money, especially when it comes to vulnerable populations, such as older people, people without documentation and people with disabilities. “We want to be good stewards of the resources that PDA has provided,” Alvis said.

As a church, Fondren has donated to Working Together Jackson, a broad-based coalition working to improve the beleaguered city.

The Rev. Dr. Robert Lowry, pastor of Westover Hills, was able to deliver water to Jackson thanks to the generosity of people from his church and Second Presbyterian Church, his childhood church.

“Between the two churches, we gathered more than 1,400 gallons of water and enough money to buy another 2,000 gallons on top of that,” said Lowry, who was Fondren’s pastor prior to Alvis. “I took all the water down last week and worked through Fondren Presbyterian, so that water went to their Meals on Wheels recipients and to their school partner, and we’re working through the church as well as the presbytery to get the funds down there to help wherever it’s needed.”

And here’s why: “Connectional church is more than just words for us,” Lowry explained, “so I think folks really saw this as a chance to live that.”

“As it turns out, Briarwood has an established partnership with the Society of St. Andrew in Mississippi to work towards the goal of ending hunger. This meant there was an established route to get water to the underserved in Jackson,” the Rev. Dr. Christopher Crotwell, Westminster’s pastor, said in an email. “Our members donated and delivered over 150 cases of water on Sept. 3. Since then, we have collected over 100 additional cases of water that we hope to deliver this week. We know this is a literal drop in the bucket, so we have every intention of continuing to make water deliveries for as long as it is needed.”

Presbyterian Disaster Assistance is one of the Compassion, Peace and Justice ministries of the Presbyterian Mission Agency. To help PDA respond to the Jackson water crisis and other emergencies, use gift code DR000015.