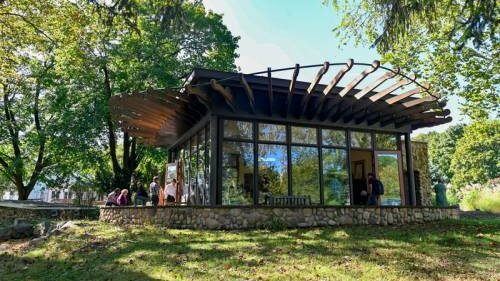 The Meditation Space is one of the most recognized sights on the Stony Point Center property. (Photo by Rich Copley)

Women of Faith. The board voted to approve nominations for the 2022 Women of Faith Awards. The three women nominated are:

The theme of this year’s awards is “Women Leading Movements for Positive Change,” said Denise Anderson, acting director of racial equity and women’s intercultural ministries at PMA. The awards will be presented on Nov. 3 at 4 p.m. EST during a virtual ceremony that will be livestreamed on the PC(USA) Facebook page and YouTube channels.

New teams. The board has reconfigured its committee structure, voted to approve the charters for each committee and appointed new committee leadership. Each of the board’s new teams discussed charters that will guide their work going forward.

The new team chairs are:

Curtis told the board that the majority of her team’s work is at the very beginning stages – with the new director of the Center for Repair of Historical Harms expected to be announced by late October. The work now is “setting the table for all the stuff to come,” Curtis said.

Some examples of the changes: the 2022 General Assembly created an LGBTQIA+ advocacy committee — so there will be staff support costs for that new work. And the assembly directed that all unrestricted bequests and gifts given to the PC(USA), rather than to a specific agency or entity, be allocated 70% to PMA and 30% to the Office of the General Assembly.

Closing worship. Board member Felecia Hardy led closing worship, preaching from Esther 4:6-17, where the prophet Mordecai tells his relative Esther to go make supplication to the king. When she resists, saying it’s too dangerous, Mordecai tells Queen Esther that she needs to go, that “perhaps you have come to royal dignity for such a time as this.”

Yoo, an assistant professor of American religious and cultural history at Columbia Theological Seminary, details in his new book What Kind of Christianity? A History of Slavery and Anti-Black Racism in the Presbyterian Church the history of Presbyterian support for slavery and for anti-Black racism. In a day-long discussion with the board, Yoo challenged Presbyterians to face that history head-on — to figure out what changes they need to make in their congregations and their communities today to begin the difficult work of repentance, reparations and healing.

As the passage from Esther shows, there are times to act, Hardy said. “If you miss your opportunity to do what God has placed you here on this earth to do in this critical time in the life of the church, you may miss the purpose of your creation.”

Jesus overturned tables and upset the religious leaders. “We stay silent far too long,” Hardy said. “Now is your time to step into what you were called and created to do.”

She called this a spiritual fight — encouraging the board members to fast and pray, and to think of those in need, who may be houseless or working multiple jobs to support their families. “There’s no difference between me and that person who is homeless,” Hardy said. Most of those she serves “live one paycheck away from poverty,’ and the world has been upended over and over, by the COVID-19 pandemic, economic warfare, global warming, wars, this week by the lashing fury of Hurricane Ian.

“Don’t think just because you’re in this nice palace, it will not happen to you.”