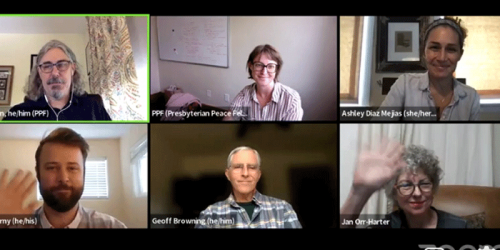 (PNS) — Even while looking back at what occurred earlier this summer during the 225th General Assembly, Presbyterian Peace Fellowship presenters kept their eyes focused on the road ahead during an hour-long online event Tuesday. Watch it here.

Founded in 1944, PPF says its mission is to encourage one another “to take seriously God’s call to God’s people to participate in God’s nonviolent work of love, peace and justice in the world.”

The Rev. Jan Orr-Harter, a retired pastor who moderates PPF’s gun violence prevention group, briefly outlined GA action that “strengthened 50 years of Presbyterian policy trying to save lives.” That includes approving a 10-year campaign, the Decade to End Gun Violence (2022-2032), to be conducted at all levels of the church.

Commissioners also applauded PPF’s Guns to Gardens project. “We’re thrilled the General Assembly commended congregations that are chopping up guns,” Orr-Harter said. “We are turning a corner and we are going to end gun violence in the United States.”

The Rev. Dexter Kearny, co-pastor of Longview Presbyterian Church in Washington state and a member of Fossil Free PCUSA, said that following commissioners’ vote to divest from five energy companies, “we were overjoyed to finally be starting some divestment, but we know there is more work to be done.”

“If you read a newspaper or turn on the TV, you know climate change is real,” Kearny said. “The time for action was yesterday, but what we have is today.”

He said PPF members and others don’t have to wait for the next General Assembly to take action. “You can start the divestment work today,” Kearny said. “We want to keep pushing for larger actions, but we want to engage frontline communities … and connecting churches to the work going on in their communities.”

The Rev. Geoff Browning, moderator of PPF’s Peace Church Working Group, said it was the 223rd General Assembly (2018) that first recognized Peace Churches. The PC(USA) now has five Peace Churches, “and we’re looking for more,” Browning said. “Peace Churches take a stand against militarism, and we aren’t going to solve climate change without addressing militarism. Churches who want to be Earth Care Congregations should also be Peace Churches.”

PPF has a Peace Church curriculum “to walk your congregation through discernment,” Browning said, including an “Inventory of Conscience Survey” that allows young people — and older ones too — to “figure out where they land between pacifism and non-pacifism,” Browning said.

“The Prince of Peace,” Browning said, “is not the God of War. This is the perfect opportunity to have a conversation with young people on what it means to go to war.”

The Rev. Ashely Diaz Mejias spoke about a new group, Presbyterians for Abolition, which seeks to eliminate what it and others call the prison industrial complex. Diaz Mejias is co-pastor of Voices of Jubilee, a new worshiping community in central Virginia that accompanies incarcerated youth and their families. “Many of us started together in circles led and organized by folks at PPF,” she said. “We believe in abolishing the prison industrial complex, not reforming it.”

Diaz Mejias also touted the importance of supporting community bail funds. “Since 2018, the PC(USA) has lifted that up as a priority of people of faith,” with a march of GA commissioners and others to raise money for the local bail fund in St. Louis, she noted. She urged listeners to learn more about ending cash bail at the Hands & Feet Initiative page.

“All this work is local,” said the Rev. David Ensign, PPF’s interim executive director. “We’re talking about how to be in communion and community with our neighbors.”

During her 12 years doing prison ministry, Diaz Mejias said she hears that the abolition work “makes sense to many people, but others still buy into retributive justice. I think we all have work to do decarcerating our own spirits.”

Those watching the event expressed their thanks for the work being done.

“As a pastor, I very much appreciate those of you who have devoted yourselves to the deep dive of this work,” said one. “I often have difficulty helping congregations move into action because they begin so uninformed. I encourage and applaud anything your groups can do to educate and introduce concrete next steps.”