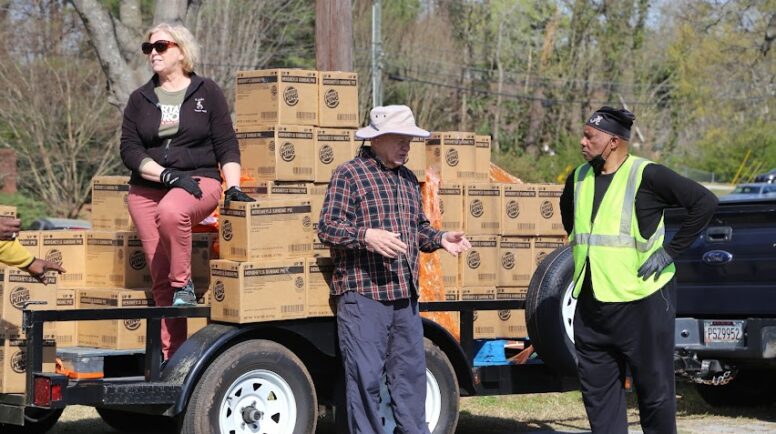 It was about 9 a.m. when Eric Powell pulled into his parking spot at Dodd-Sterling United Methodist Church.

Out on Brown’s Mill Road, cars were already lined up for an event that would not begin until 10:30 a.m.

“We have several families that take turns being first,” said Powell, who pastors Dodd-Sterling, with a kind and gentle smile. “I have seen cars here as early as 8:30 in the morning.”

The skies were gray and threatening. There would be rain and wind.

And it would not matter.

About 10:15 a.m. the food arrived on a couple of flatbed trailers connected to trucks driven by Alonzo Nash (Dodd-Sterling) and Bill Womack (Saint Luke’s). The rain arrived with the food, but volunteers from both congregations had already erected tents to protect the cardboard boxes.

Paula Powell, Eric’s wife, checks everybody in and gives each car a number that determines how many boxes of food the driver will receive.

Nancy Moore from Saint Luke’s holds the sign that tells each driver where to stop for the food to be loaded into their car. Mary Guerrant of Saint Luke’s keeps the boxes moving off the trailer to the volunteers who load them.

The mood is decidedly upbeat.

“We want our friends to be happy when they get here and then, when they leave, be happy that they came,” said Powell.

Despite the weather, there are more than enough volunteers from both churches to make things run smoothly. DeWayne “Skeet” Keith of Dodd-Sterling kept everyone laughing through the rain. David Williams, also of Dodd-Sterling, gave us his best fishing tips.

The distribution started on time, and 125 families were served during the two-hour event.

It should be noted that this was not just another day in the life of this successful food ministry. This day officially marked the second anniversary of a bi-weekly food distribution that began in response to COVID-19.

According to figures provided by Urban Recipe, this program has distributed 250,000 pounds of food for a total of 208,833 meals in the past two years.

“This program has become a model of how to efficiently get food to people who need it for a very good cost,” said Jeremy Lewis, executive director of Urban Recipe. “I think a lot of people will follow what has been done here.”

And here’s how it happened.

“Brothers from another mother”

David Lower and Eric Powell could not come from more different backgrounds.

Lower, 47, attended Woodward Academy, one of the most prestigious private schools in the Atlanta area. He received his undergraduate degree from Harvard and earned both his master of divinity and his doctor of ministry from Emory University’s Candler School of Theology. He was an IT professional before deciding to enter the ministry and receiving a call to St. Luke’s.

Powell, 68, is a Chicago native who spent “30 years and eight months” in the military before settling in Atlanta with his wife Paula. He was once the youth pastor at an all-White church in Eagan, Minnesota.

“I was the only fly in the buttermilk,” he said.

Both took over their pulpits in 2016 and both were “encouraged” by their respective congregations to continue the partnership between the churches, a relationship that dated back two decades when they began building Habitat for Humanity houses together.

“We felt a sense of connection between our congregations but what do we do with that?” asked Lower. “[The relationship between their congregants] was like a breakfast-once-a-year kind of relationship or see-you-around-the-Habitat-House relationship. It was established, but it was limited. It was not necessarily intimate or habitual.”

They met at an IHOP, and for the next three hours they opened up to each other. Absolutely everything was on the table.

In the first 15 minutes of their meeting, Lower said, “I’m White privilege. I get it.”

They decided that maintaining the status quo between their churches would not be enough.

“By the time we left [IHOP], we were excited about having met each other,” said Powell. “Now I call him my brother from another mother.”

“So what are we going to do about it?”

In 2020, Dodd-Sterling and Saint Luke’s had been building a relationship for years. This was largely fostered through their twice-yearly breakfasts together. In April 2020, they decided to move this fellowship online. With everyone quarantined at home the decision was made to gather and pray together via Zoom.

“When we asked our friends (at Dodd-Sterling) what we could pray for, right away they told us … they couldn’t meet the demand for food in their neighborhood,” said Lower, and this was just two weeks into the pandemic.

Powell told those on the call that the church kept a small food pantry to help families with emergency needs, but that it wasn’t nearly enough for a community that has been massively laid off and was “hanging on by a thread” financially.

Something on a much larger scale was going to be required.

As soon as the call ended, Lower’s phone rang. It was Daryl Moore, a St. Luke’s congregant who was also on the Zoom call.

“Alright, what are we going to do about it?” Moore asked Lower. “We can pray about it, but we can also do something about it.”

Moore and Lower reached out to about 25 members of the Saint Luke’s congregation for donations to purchase food for the Dodd-Sterling pantry. At least a couple of thousand dollars poured in immediately said Lower.

On the Zoom call, Powell said the most immediate food need was protein. So Lower and his teenage son Matt took the funds and went to the local Walmart.

“We had like three carts of frozen chicken. We bought them out,” said Lower.

The Dodd-Sterling pantry was restocked, and the short-term need was addressed.

But this was just the beginning.

The partnership with Urban Recipe

To keep meeting the need, the next order of business for the two congregations was to find a reliable, less expensive food source. Retail shopping for food, which several members of the churches had previously done, was not a financially sustainable plan for keeping the food pantry stocked.

Lower reached out to Jeremy Lewis, his long-time friend. Lewis was several years behind Lower at Woodward Academy, but they were reunited at the Candler School of Theology at Emory University.

Lewis had taken over as executive director of Urban Recipe in 2016, the same year that Lower was called to Saint Luke’s. Lewis, who played football at the University of Georgia, “is a big thinker when it comes to solving big problems,” said Lower.

So Lower laid out the entire situation for Lewis who, not surprisingly, had an idea.

“He told us that he could get us more food than we could ever get on our own,” said Lower. “When he said that I got excited.”

Because of Urban Recipe’s relationship with the Atlanta Food Bank, Lewis could get food for pennies on the dollar. With the connections provided by Urban Recipe, it costs $37,000 per year to fund the ministry, a price that is easily met through the two church budgets and contributions from private donors.

Urban Recipe has a huge facility in downtown Atlanta where large amounts of food are stored and then boxed up for distribution to the various partners Urban Recipe serves, including Dodd-Sterling and St. Luke’s.

As part of the co-op agreement with Urban Recipe, the members of Saint Luke’s and Dodd-Sterling are required to contribute six work sessions a week building boxes, packing boxes or any other work that needs doing. Each session is about 2 ½ hours.

For Dan and Sally Joyce, this work is personal. The Joyces have two African American granddaughters.

“We recognize there is systemic racism in our country and so we had the desire to do something small on a local level,” said Dan, who grew up next to Jackie Robinson and his family in Stamford, Connecticut. “The thought of [our granddaughters] not being able to take advantage of everything this country has to offer because of the color of skin disturbs us.”

On Urban Recipe’s distribution day, which is every other Tuesday, the trucks with flatbed trailers show up at the warehouse at 9:30 a.m. Boxes of food are on pallets and are loaded onto the flat beds with a forklift.

“The old way [of distributing food] was so inefficient,” said Joyce, a member of St. Luke’s. “With volunteers providing the labor, we’ve got it down to about $6 per box.”

While the food delivery program has given the community surrounding Dodd-Sterling more food security, both pastors know this partnership means more than one beneficial outcome. The relationship between the churches has also fed the souls of both congregations – and their relationship with each other – beyond measure.

When Dodd-Sterling needed a wall torn down to make more room in the fellowship hall, a Saint Luke’s delegation was there. That team is also working with Dodd-Sterling members on a new shed behind the church.

“If Saint Luke’s didn’t do what they do, we (Dodd-Sterling) couldn’t do what we do,” said Powell.

The two congregations also have Bible study together on Wednesdays. At the most recent Saint Luke’s women’s retreat, 12 members from Dodd-Sterling were in attendance. That was a first.

On May 7, Powell received his master’s degree in religion and education from Gammon Theology Seminary in Atlanta. A number of Saint Luke’ members were in attendance. He wrote his final thesis on the relationship between Saint Luke’s and Dodd-Sterling.

On May 14, Saint Luke’s hosted a breakfast to celebrate Powell’s graduation.

“We’ve had a relationship with Dodd-Sterling for a long time, but this (food distribution) has taken us to a whole new level,” said Lower. “In these two years we have worked together for over 100 hours. That’s a lot of laughing and fun together.”

But at the end of the day, said Lower, the trust that has been built between the two congregations may be the greatest gift of all.

“That is one of the most meaningful things that Dodd-Sterling has given to Saint Luke’s,” said Lower. “Because it is not easily given.”

“This ministry with Saint Luke’s is extremely important because it puts us in touch with our community in a very important, very intimate way,” said Powell.” People need to eat. Every two weeks they can come to Dodd-Sterling and get some food. It has become an intricate part of what we do at Dodd-Sterling.”

When the Black Lives Matter protests began in the summer of 2013, there were difficult discussions being had across the country. Saint Luke’s and Dodd-Sterling were no different. But those discussions were made a little easier by the fact that every two weeks these congregations joyfully work together to help their neighbors through their food distribution.

“When [the people of Saint Luke’s] started to hear the cries that ‘our lives matter too’ — that was not a political outcry,” Lower said. “These are our friends and family.”

“I can’t tell you what a joy it has been to work with our friends from Saint Luke’s on this project,” said Dodd-Sterling’s DeWayne Keith. “I know I’ve learned a lot, and I know we’ve helped a lot of our neighbors. I love their smiles when they come through to get their food.” 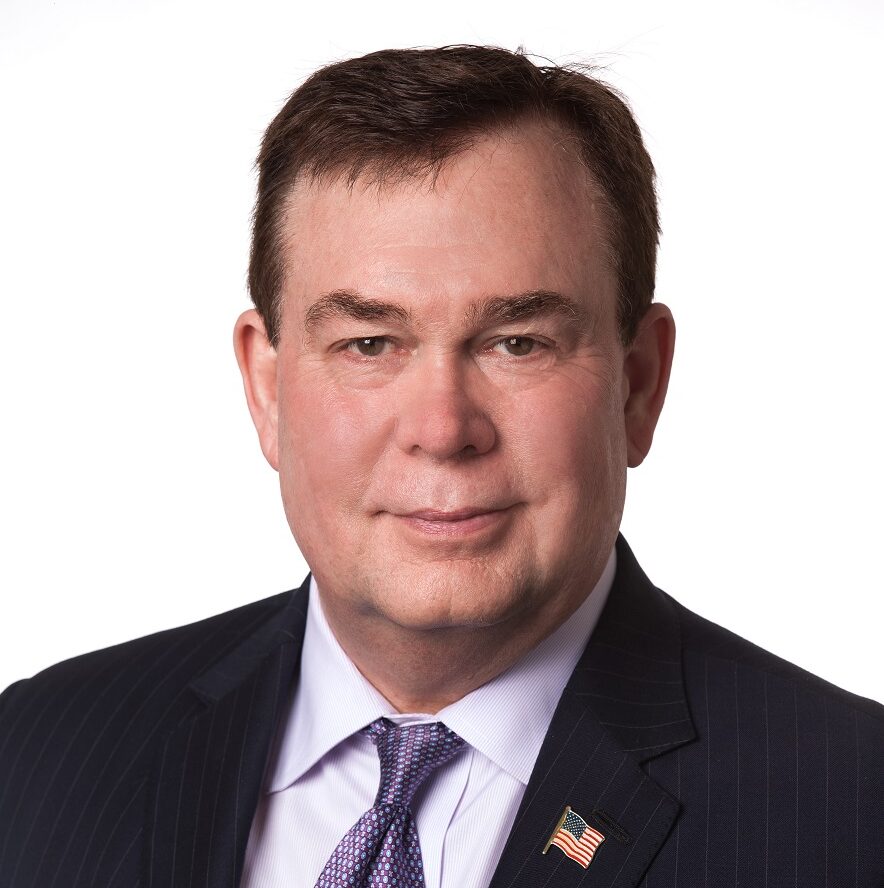 Tony Barnhart is an elder at St. Luke's Presbyterian Church in Dunwoody, Georgia, where he and his wife Maria have been members since 1995. He is in his 46th year as a sportswriter/broadcaster for various media outlets including CBS, ESPN, and the SEC Network.