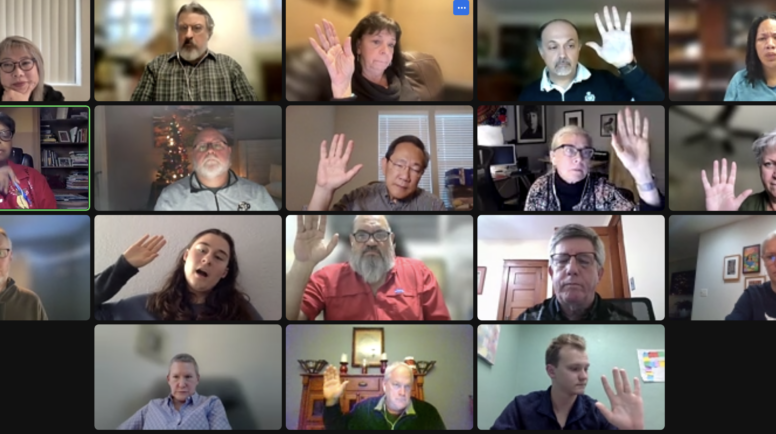 Members of the unification commission indicate their availability for meetings on proposed dates.

A new commission that will work to restructure the top levels of the Presbyterian Church (U.S.A.) started its work Dec. 17 by discussing what it has been authorized to do over the next four years – and what’s outside its mandate.

The 2022 General Assembly gave the commission the task of unifying the Presbyterian Mission Agency (PMA) and Office of the General Assembly (OGA); revising the Organization for Mission; and working “to align the GA entities toward long-term faithfulness and financial sustainability,” according to a summary presented during the Dec. 17 Zoom meeting.

The new unification commission can set strategies and priorities to accomplish General Assembly goals, and can establish coordination between missional and ecclesial work. If needed, it has the authority to “assume all governance functions of the Presbyterian Mission Agency Board and the Committee on the Office of the General Assembly.”

In other words: this commission has the power to make big change.

What it can’t do: change the boards or bylaws of other PC(USA) agencies or entities – including the Presbyterian Foundation, the Board of Pensions, and the PC(USA), A Corporation.

The co-moderators of the 2022 General Assembly, Shavon Starling-Louis and Ruth Santana-Grace, appointed the new 12-member unification commission earlier this fall, choosing as its co-moderators two people who served as commissioners to the 2022 General Assembly –  Felipe N. Martinez, a minister from Ohio Valley Presbytery, and Cristi Scott Ligon, a ruling elder from the Presbytery of Middle Tennessee. Both served in leadership at that assembly – Ligon as moderator of the Bills and Overtures Committee, and Martinez as vice-moderator of the Financial Resources Committee.

Some other members of the commission provide representation from particular groups – including two who were young adult advisory delegates from the assembly.

“Thank you for your ‘yes’ “to serving, Santana-Grace told the commission members at the start of the meeting.  “If ever there were a people brought together with an opportunity to do something that for many is unimaginable, to reimagine, to rebuild boldly with a hope and a vision, it is you.”

Both she and Starling-Louis said they are praying for the commission – which has the power to act on its own, not just to make recommendations to the next assembly.

“You have been in our hearts and prayers in ways you can’t even imagine,” Santana-Grace said. “We are aware of all the scarcity, all the stuff, all the challenges, but it is God’s ‘yes’ before you, before us. You are a commission; you are not a committee. You have been entrusted with quite the task.”

Starling-Louis said she is grateful and excited, even in the spaces of uncertainty surrounding what the commission might do. “We just trust so much that God is up to something beautiful in and amongst you. … Thank you, thank you, thank you.”

The portent of this meeting is not so much what transpired during this particular session, but that it’s the beginning of a complex, comprehensive process that will, in ways yet to be determined, will shape the top levels of the structure and focus of the denomination.

Among the foundational questions, as Santana-Grace put it: What is the mission and ministry of the denomination? And how can the commission further that work?

The seeds for this commission were sown by several predecessor groups – including the Moving Forward Commission, the Way Forward Commission, the Moving Forward Implementation Special Committee, and the Special Committee on Per Capita Based Funding and National Church Financial Sustainability – that have done deep dives over the past six years into foundational issues of the PC(USA), and have made recommendations for change. Among the issues those groups addressed: power dynamics at the top levels of the church, and financial stresses, particularly on small congregations and mid councils.

Now it’s up to this commission and upcoming General Assemblies to sort through what structure is best for a church that is changing in dramatic ways – with fewer people affiliating with organized religion, fewer people going to seminary in order to enter pastoral ministry, more congregations unable to afford full-time pastors.

At the grass roots level, some Presbyterians will pay no attention to this commission at all.

Some who follow denominational politics closely – and yes, there is such a thing as church politics – will parse every nuance.

And for those who work at the PC(USA) national offices, the uncertainty about what changes might come and how that might affect their jobs and responsibilities is a source of stress.

To some extent, this meeting was stage-setting for the work ahead – starting with a closed-door team-building session, followed by a public session in which the commission co-moderators outlined a sense of what will come next.

Part of that work is to clarify what, according to the action of the 2022 General Assembly, the commission is responsible for – and what it cannot do. It does have significant responsibilities – to oversee and facilitate the unification of (unification is the term being used, rather than merger) of PMA and OGA. Read the document for a summary clarifying the action the 2022 assembly took in creating the commission.

One piece of that task, explained Kerry Rice, deputy stated clerk for the PC(USA), will be consultation at the top levels of the church – including with leaders of PC(USA) agencies and of the boards of those agencies; with advocacy and advisory committees; and with mid councils.

“You’re supposed to talk to the whole national structure of the church – so be ready for lots of conversation,” Rice said. Regarding mid councils, one question is how to do those consultations – given there are 166 presbyteries and 16 synods.

Commission member Scott Lumsden asked how much time the commission has to do its work – can it take four years? The only deadline the assembly specified was to present a recommendation for the new Organization for Mission in 2026, Rice said. “Everything else is really up to you all.”

Does the commission need to present its recommendations to the 2024 assembly for its approval – or can it “actually unify” and not say to the assembly, “Here’s what we plan to do; are you guys OK with it?” Lumsden asked.

The commission has the authority to make changes itself, and to report what it’s done to the assembly, Rice said.

How much material will commission members be asked to consider and absorb? How much time will all that take?

“We can inundate you with history and documents and stuff,” said Kathy Lueckert, president of the PC(USA), A Corporation. “There are lots of unresolved historical narratives,” and possibilities for going deep into denominational “rabbit holes.” So “you can be very granular and dig into a lot of history and context, or you could choose to look more forward. … Some context clearly is important,” but the commission will have to determine “how granular you want to be,” and for how long.

The commission has set its next two meetings: