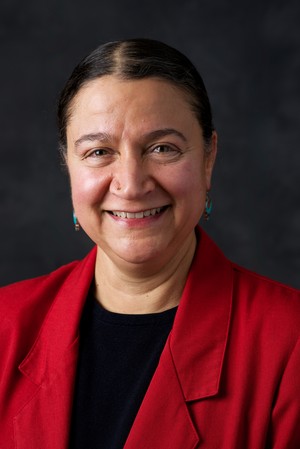 FARMINGTON, MINN. (PNS)  The Synod of Lakes and Prairies elected Elona Street-Stewart, its current associate for racial ethnic ministries and community empowerment, to be its next synod executive effective Jan. 1.

She will be the first Native American to serve as a synod executive in the Presbyterian Church (U.S.A.).

A ruling elder and a longtime staff member of the synod, she was elected when the synod met at the Mt. Olivet Conference and Retreat Center here Oct. 5-7.

Street-Stewart, who has served in her current position in the synod since 1994, said, “I am a woman of faith and I am grateful to serve wherever I am called.”

Street-Stewart reflected on a preserved two-row wampum belt as metaphor for change in today’s church.

The wampum belt “features two long dark bands spaced apart across the full length of the wampum belt,” she said. These are the paths of two boats, a canoe and a sail boat. It can be interpreted as both traveling on the river of life and … neither may interfere with the other’s speed or harm the quality of its structure design along the way,” she said. “They travel along together in respect for each other, but the one will not become the other.”

She pointed out, “Even the elders of hundreds of years ago were aware of the dichotomy of consciously living in the midst of change – that we are not independent of each other. The image in the wampum is about the dynamic relationship of being part of the whole. One may choose to see only the dark bands, but the native perspective sees the whole sash.”

A familiar church leader at the national level since 1980, Street-Stewart chaired the Council on Church and Race, the Advocacy Committee on Racial Ethnic Concerns and was a member of the Relocation Committee of General Assembly Agencies following reunion of the northern and southern branches of what today is the PC(USA).

She received the denomination’s Women of Faith Award during the 219th General Assembly (2010).

Other church-wide responsibilities include the national Self Development of People Committee, Presbyterian Women, Third World Women, Committee on Representation, Native American Consulting Committee, and the General Assembly Nominating Committee. She currently serves on the executive committee of the Minnesota Council of Church.

In 2001 Street-Stewart became the first American Indian elected to serve on the board of an urban school district in Minnesota. Re-elected in 2005 and 2009, she served as the chair of the board, and as a district director on the Minnesota School Boards Association, the Council of the Great City Schools and the National School Board Association’s Council on Urban Boards of Education.

“I was always reminded while growing up that I was given great responsibility – to give back in return for what I had been given, to always do my best, and to look for the good path,” she said.

Raised in Philadelphia, Street-Stewart was an Upward Bound student at Swarthmore (Pa.) College and received her bachelor’s degree from Occidental College in Los Angeles. She and her husband, the Rev. David Stewart, have four children and three grandchildren.

Duane Sweep is associate for communications for the Synod of Lakes and Prairies. He is a regular contributor to Presbyterian News Service.