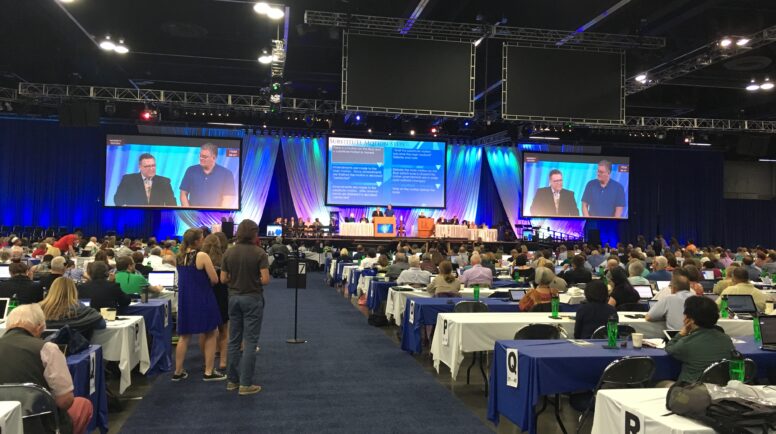 Choosing an approach that its supporters described as a “middle way,” the 2016 General Assembly disregarded a committee’s recommendation that the Presbyterian Church (U.S.A.) divest comprehensively from fossil fuel companies – and decided instead to pursue a process of trying to influence energy companies through stockholder engagement.

Late on the last evening of the assembly, the commissioners voted by a strong margin – 391 to 161 (or 70 percent approval) – to choose a minority report favoring corporate engagement over the recommendation of the assembly’s Immigration and Environmental Issues committee. That committee voted 31 to 24 earlier in the week in favor of divestment from the 200 publicly traded oil and gas companies from the Carbon Underground list.

But in the end, the assembly voted not to go that way – deciding instead to request that the Board of Pensions, the Presbyterian Foundation and the Presbyterian Investment and Loan Program “consider an increasingly more diversified energy sector in their overall investment portfolios.”

The assembly also approved amended language to direct the PC(USA)’s Mission Responsibility Through Investment committee “to pursue its focused engagement process on climate change issues with all corporations, particularly with those in the oil, gas, and coal sectors.” MRTI is to report back to the 2018 General Assembly with recommendations, “including possible selective divestment if significant changes in governance, strategy, implementation, transparency and disclosure, and public policy are not instituted by the corporations during the engagements of MRTI and ecumenical partners.”

That decision marks the second time in a row that a PC(USA) General Assembly has voted not to divest in fossil fuels – despite strong support for doing so at the grassroots. This year, the Presbytery of San Francisco sent the overture recommending divestment, winning concurrences from 31 other presbyteries.  That overture called on the Board of Pensions and the Foundation to immediately stop any new direct investment in fossil fuel companies, and to work to ensure that within three years, “none of the Board’s or the Foundation’s directly held or commingled assets includes holdings of either equities or corporate bonds in the fossil fuel companies” from the Carbon Underground list.

The assembly’s decision was deeply disappointing to advocates of fossil fuel divestment.

Former General Assembly moderator Bruce Reyes-Chow wrote on Twitter that while the 2016 assembly has made many decisions with which he agrees, “our failure to divest in fossil fuels is a monumental miss.” Reyes-Chow was one of nine former moderators who signed a letter supporting the San Francisco overture.

Mary Lynn Walters, vice moderator of the committee, told the assembly that “not one member of our committee questioned climate change” – in other words, no one contended that climate change is not real or isn’t having an environmental impact on the planet. But there was plenty of disagreement about what constituted a faithful response.

The assembly voted down divestment after some commissioners warned that people who work in energy-related jobs would view a PC(USA) move to divest in fossil fuel companies as “a criticism of their life’s work,” in the words of David Green, a teaching elder from the Presbytery of New Covenant in Texas, who was one of those who drafted the minority report the assembly approved.

A vote to divest “will be perceived by many of my parishioners and others as vilifying faithful people.” Green said.

Other Presbyterians, however, contended that the PC(USA) can’t afford to wait to act – the environmental cost is too high.

“The impetus is here to act now,” said Karen Turney, a ruling elder from the Presbytery of Greater Atlanta, citing a litany of environmental impacts that including drought and global warming.

Ultimately, however, the assembly voted not to divest – having heard advice from representatives of the PC(USA)’s Mission Responsibility Through Investment committee. “We believe categorical divestment would take away our leverage” to influence energy firms through corporate engagement, said Joseph Kinard, who chairs MRTI’s environmental issues committee.

MRTI made its recommendations because the 2014 General Assembly referred to it an overture from the Presbytery of Boston seeking divestment. That overture – with concurrences from 11 other presbyteries and support from the advocacy group Fossil Free PCUSA– asked the General Assembly to instruct the Board of Pensions and the Presbyterian Foundation to stop investing in fossil fuel companies and to liquidate any investments it already held in those companies within five years. Instead of doing that, the 2014 assembly voted 469-110 to refer the overture to MRTI.

And advocates both of divestment and of other approaches have been working hard over the past two years to convince the assembly to go their way.

The vote of the 2016 assembly in Portland– while it certainly pleased some and disappointed others – doesn’t put the matter to rest. Now, Presbyterians who are serious about wanting to address climate change have to take that decision and put it to work. Those who favor corporate engagement have to do the hard, frustrating work of trying to convince big energy companies to try to meet with them and do things differently.

Max Reddick, a teaching elder from East Tennessee Presbytery who also helped present the minority report, spoke of establishing partnerships and changing minds because “a theological voice is present.” Michael Gizzi, a ruling elder from the Presbytery of Great Rivers, described the MRTI approach as allowing “divestment with a scalpel.”

And many young Presbyterians say people of faith have a moral obligation to act now – to reduce their own personal carbon footprints, and to push for policy changes and corporate responsibility as well.