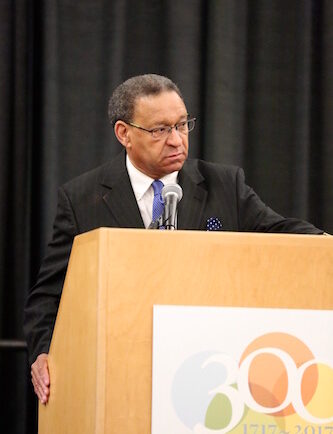 Boesak shared that no other confession has put together and focused so fiercely upon the “inescapability of unity, the foundationality of reconciliation and the indivisibility of justice.” As Boesak spoke, the voice of the presenter in the adjacent Presbyterian Peace Fellowship breakfast could be heard faintly through the convention center’s movable walls.

Boesak said, “We can’t love Christ without loving Christ in our brothers and sisters.” He continued, “Unity of the church of Jesus Christ is both a gift and a command.” His remarks were punctuated by the words of the speaker next door, words such as “Empire!” and “the power of God!” All the while, a translator at a back table quietly repeated Boesak’s words, giving a Pentecost-like feel to parts the room.

Boesak unequivocally challenged those gathered to support Palestinians and the BDS campaign (Boycott, Divestment and Sanctions). He equated the plight of the Palestinians with that of black Africans in South Africa during apartheid. Boesak said of his time with Palestinians, “It was as if I saw ‘Belhar’ written on that wall.”

In the question-and-answer period following a standing ovation, Boesak continued his plea for the Palestinians. He said, “Why is it so hard for us to believe our brothers and sisters in Palestine? Go there. Let them show you what the occupation is like.”

When asked how local congregations might lift up the Confession of Belhar, Boesak said that Belhar “has taught us as a church the difference between being a church with a confession and a confessing church.” Further he noted, “It makes no sense if you lock it up in the Book of Confessions.”

Boesak encouraged writing liturgies and hymns based on the confession so that it might “change and challenge” the Presbyterian Church (U.S.A.) as it has the Reformed Church in South Africa, reminding those listening that “justice, unity and reconciliation is not just heard but seen.”