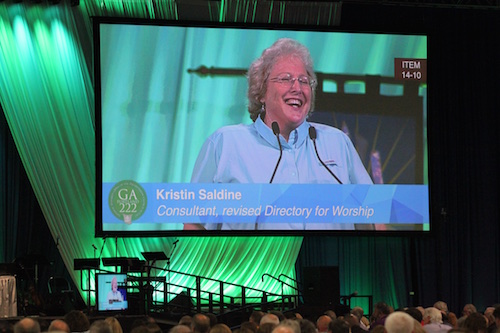 PORTLAND, Ore. –The 2016 General Assembly has approved proposed revisions to the Directory for Worship for the Presbyterian Church (U.S.A.) – which would be the first major revision of the document in 27 years, done with the intent of making it more flexible and accessible.

The question, in other words, was whether people who haven’t been baptized are welcome at the PC(USA) communion table. David Gambrell, associate for worship in the PC(USA)’s Office of Theology and Worship, said that historically, the pattern of Christian initiation is for baptism to come first, followed by participation in communion. But there are “pastoral exceptions,” Gambrell said – where “we welcome them, we feed them, but then we promptly invite them into deeper relationship with Christ through baptism.”

While some commissioners argued in favor of restricting communion to the baptized, others spoke of how an open communion table can be a way to reach out to people interested in a life of faith.

“Those who come to the table are already seeking Jesus Christ,” said Dresden Vogt, a young adult advisory delegate (YAAD) from the Presbytery of Sacramento.

“Requiring baptism in order to take the Lord’s Supper would block something vital that could happen between the communicant and Christ during communion,” said Amy Meyer, a teaching elder from Mission Presbytery. “If we believe there is a mystery that happens and we meet Christ in communion, I wouldn’t want to block that from happening for any reason.”

The assembly defeated the proposed amendment by a voice vote.

The commissioners also discussed whether the Directory for Worship language should say that when a young child is presented for baptism, at least one parent or person exercising parental responsibility should be an active member of a Christian church – or whether the language should be that the parent will be a member (ultimately voting to choose should).

Sometimes, “there are no adults bringing them to church,” said Miriam Mauritzen, a teaching elder from Glacier Presbytery. Parents might be in prison, might have abandoned the child, the young person may be emancipated.

“We don’t want to deny Christ to anyone,” said Guy Moody, a ruling elder from Baltimore Presbytery.

Kristin Saldine, a consultant working on the revised Directory for Worship, gave some of the reasons for making the revisions – a revision process that’s been underway for a decade. Among them: The changes would make the directory shorter and more flexible; would use more accessible language and organize the material better; and would add sections on worship and culture and the work of the Holy Spirit.

The proposed Directory for Worship revisions were part of the report of the assembly’s Theological Issues and Institutions Committee (Committee 14).

That committee also considered an overture (Item 14-01) from the Presbytery of Kiskiminetas (in western Pennsylvania) to amend the PC(USA) Book of Order to change language that the 2014 General Assembly approved (and which was endorsed by a majority of the 171 presbyteries) defining marriage as being “between two people, traditionally a man and a woman.”

The overture from Kiskiminetas would have said instead, “marriage involves a unique commitment between one man and one woman to love and support each other for the rest of their lives.”

The assembly voted 443-119 to disapprove the overture – and to retain the current language. In 2014, the assembly’s vote to change the definition of marriage to “between two people, traditionally a man and a woman” prevailed by a vote of 372-237.

Two other items from the committee also drew considerable energy – and served as a test of the assembly’s voting system in use at the Oregon Convention Center. After four votes, the assembly voted 305-264 to approve an “Affirmation of Creation” (Item 14-13) from the Presbytery of Boston – regarding creation and scientific inquiry. On the first vote, the assembly narrowly failed to approve the measure (voting 281 yes, 286 no), but then some commissioners told the co-moderators the machines had failed to register their votes. So they tried the vote again – three times – and in the end, the overture prevailed.

Another controversial matter was an overture from the Presbytery of the Cascades (Item 14-02) to endorse the Clergy Letter Project, which states, “the timeless truths of the Bible and the discoveries of modern science may comfortably coexist” and that evolution is a “foundational scientific truth” and that to treat it as “one theory among many” is to “deliberately embrace scientific ignorance.”