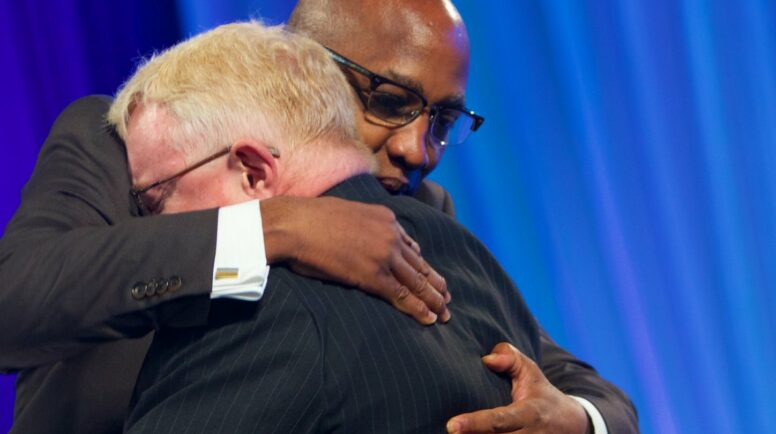 Nelson issued a call to Presbyterians stop focusing on internal church disputes, numerical survival, and labeling each other as progressives or conservatives, and to focus on “the impact God can make through us” in a broken world.

On the first ballot, the assembly voted overwhelming 447 to 112 to elect Nelson – the official nominee and the director of the PC(USA)’s Office of Public Witness – over challenger David M. Baker, stated clerk of the Presbytery of Tampa and its director of communications.

Nelson will serve as the PC(USA)’s top ecclesiastical and constitutional officer, representing the denomination in interfaith and ecumenical settings.

He is expected to begin his work as stated clerk in late July or early August. And he moves into the job following the retirement of Gradye Parsons, 63, who has served as clerk for eight years (two four-year terms) but who is now retiring to move with his family back to his beloved Tennessee.

Nelson’s election, along with other recent leadership changes, brings a new sense of diversity to the top public leadership of the denomination.

For the first time ever, there will not a white man at the top.

The new stated clerk is African-American. Tony De La Rosa, who started as interim executive director of the Presbyterian Mission Agency last December, is a gay Latino lawyer and ruling elder. The co-moderators of the 2016 General Assembly are T. Denise Anderson, a 37-year-old African-American pastor (and the youngest person ever elected moderator) and Jan Edmiston, a white pastor and presbytery executive. This is the first time the assembly has ever elected co-moderators or had two women as its moderatorial team.

So it’s a new day for PC(USA) leadership – both in composition and focus. Where that will lead – what issues will dominate the denomination’s public witness and what the tone of the rhetoric will be – remains to be seen.

Another question: With the PC(USA) shrinking in size (the denomination lost another 95,107 members and 187 congregations between 2014 and 2015), how much influence will a mostly-white mainline denomination have in a multicultural, increasingly secular public square?

During a question-and-answer session, Nelson told the assembly that the PC(USA) “can no longer be a 93 percent white denomination moving into the future and expect to grow.”

Presbyterians of different backgrounds need to be in conversation with one another – building relationships and recognizing that “we are not homogeneous in the way we think about Jesus Christ or the world.”

He challenged Presbyterians to “move beyond church walls into the streets” and to get involved in creating jobs and feeding the hungry and taking on concerns about police violence and racial injustice in St. Louis and Baltimore – where the next two General Assemblies will be held.

Initially, 13 candidates applied to be clerk (including Baker, because according to the rules a challenger can only come from the applicants the committee has considered). After an initial round of interviews, the Stated Clerk Nomination committee cut the group to six in February and then to three finalists in March.

Baker, who challenged Nelson’s nomination, had a hard task – getting his message out while being much less well-known than Nelson, but certain that he had gifts to offer the broader church. “I felt that God was asking me to take this step, for whatever reason,” he told the assembly. “Because of that, I felt I needed to do it.”

Baker said “the PC(USA) is at a crossroads – and as stated clerk he would focus on the local, on supporting congregations and presbyteries. As the founder of a technology firm, he also would offer resources – free software, website development and training – to support Presbyterians at the grass roots.

Both Nelson and Baker are teaching elders.

Nelson served as a pastor from 1986 to 1997 at St. James Presbyterian Church in Greensboro, North Carolina, and for a dozen years before that as organizing pastor of Liberation Community Church in Memphis, Tennessee. He also has served as associate director of the Benjamin L. Hooks Institute for Social Change at the University of Memphis in Tennessee.

He has led the PC(USA)’s Office of Public Witness in Washington, D.C., since 2010. Nelson’s wife, Gail Porter Nelson, is pastor Northminster Presbyterian Church in Washington, D.C. Married for close to 31 years, the Nelsons have an adult daughter.

Baker earned a Master of Divinity degree from Princeton Theological Seminary and an undergraduate degree in psychology from the College of William and Mary. He founded a firm called Internet Outreach Experts, which helps churches create websites and an online presence.

Following Nelson’s election and installation, Parsons reminded the new stated clerk that 1.5 million Presbyterians will be praying for him.

Parsons’ charge to the assembly: Give the new stated clerk as much respect, honor and patience as they have given to him.

Nelson then offered thanks. He told of the formative influence of his father’s ministry, a pastor who served in Orangeburg, South Carolina, during the heat of the civil rights struggle in that community. He told of his parents’ valuing both of justice and evangelism, and said many who came before him in the struggle “did not see or envision the possibility of this ever happening.”

He thanked his wife, Gail, and daughter, Alycia – saying that Alycia told him, when he was considering applying to serve as stated clerk, that “you’re a fixer” – through his experiences working in church redevelopment in Greensboro, with a new church development in Memphis and then in the Office of Public Witness.

“They all required some fixing,” Nelson said. “But the fixing wasn’t done by me. It was done by a God who held my hand at every turn.”

Nelson acknowledged that some are questioning what kind of clerk he will be.

“I know there are some concerns out there,” he said. “I have never been a stated clerk before. But I want you to know something. I know how to read. I have been to school” – since high school, always at Presbyterian-related schools – “and I know how to learn.”

He repeated again his vision of “a vibrant and powerful future for the Presbyterian Church (U.SA.). We are not dead. We are alive.” Led by God, “we are transforming the world, one person at a time.”