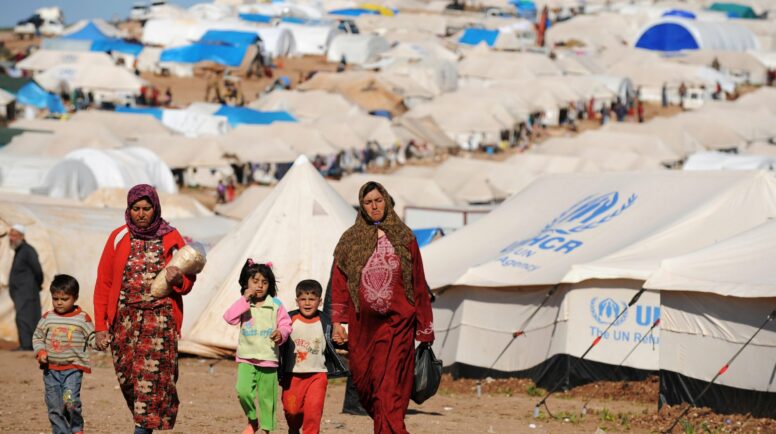 PORTLAND, Ore. – Committee 9 of the 222nd Presbyterian General Assembly has the task of considering “Immigration and Environmental Issues” – a broad range of matters of deep concern to many Presbyterians. On the evening of June 20 the committee members completed their work on fossil fuel divestment. The next morning, on June 21, they took up an overture on refugee resettlement titled, “On Responding to Our Sisters and Brothers Who Are Refugees or Internally Displaced.”

The committee started by hearing advocates speak passionately on behalf of the overture – beginning with Cecelia Brewer, a ruling elder from Second Presbyterian Church in the Presbytery of New York City, the presbytery which initiated the overture.

Brewer discussed the current status of refugees, noting that the world is experiencing the highest number of refugees since World War II. She also acknowledged the xenophobia and nativism that has entered the debate around refugees and immigrants.

“As Americans we need to acknowledge that this fear of the stranger has been a recurring undercurrent of our national life,” she said. Brewer cited a number of ways that fear has played out in U.S. history: the Know Nothing Movement against the Irish, the House Committee on Un-American activities; the Chinese Exclusion Index against Chinese Americans; and the Nisei camp in which Japanese Americans were interred.

“But the victimization of refugees that most closely resembles the plight of Syrian refugees today is the craven refusal of FDR (President Franklin Delano Roosevelt) to allow a ship, the SS St. Louis, carrying 937 Jewish refugees from Hitler’s Germany to dock in Miami in 1939,” she said. The ship returned to Germany and a quarter of its passengers died in the camps.”

Brewer went on to describe the limit on the number of Syrian refugees the U.S. has agreed to admit – a cap of 10,000 – and how the U.S. has not even allowed in a quarter of that number yet. She followed this with a description of the backlogs in the nation’s immigration courts and the impact that has on refugees and asylum seekers, pointing out that the overture calls on the U.S. government to speed up the process without compromising security.

Brewer discussed the disproportionate impact of the refugee crisis on Lebanon, where nearly one out of every three residents is a refugee, and contrasted that with the U.S. response. “It shames me to think of the protestors in California turning away a bus of 140 immigrants from Central America, and the lack of compassion for the unaccompanied minors escaping the gang violence there,” she said.

She closed her testimony reflecting on fear and love quoting 1 John 4:18, “There is no fear in love. But perfect love dries our fear, because fear has to do with punishment. The one who fears is not made perfect in love.”

And then she said: “But it is the parable of the Good Samaritan that I find myself returning to for guidance. It is Jesus’ teaching about rising above the claims of tribe and locating our common humanity in compassion and mercy. About the Good Samaritan, John Calvin wrote that there is a ‘mutual obligation between all men.’ If we take this mutual obligation seriously, we respond vigorously to the needs of refugees. We do not build walls to keep them out but bridges to bring them in, to acknowledge their suffering and bring them to safety.”

Susan Schroeder, a ruling elder from the Presbytery of the Cascades, was the second overture advocate to speak. Her remarks centered around the refugee crisis in the Middle East. More than half the population of Syria is living as refugees, including 6.5 million internally displaced persons and 4.4 million who have left the country. Half of those refugees are children, who suffer disproportionately losing their childhood and living in unhealthy and unsafe conditions. These children can be exploited as laborers, recruited by extreme radical groups, and are at greater risk for early childhood marriage and gender and sexual based violence, she said.

Schroeder encouraged the commissioners to put themselves in the context of the refugees.

“If your family had lost its home and livelihood because of war; you are living in a crowded, dangerous, unsanitary refugee camp in a foreign country; your financial stipend for food is not enough to feed your children for the month; what would you do? You might send the most able-bodied person in the family – yourself or your eldest son – to take your chances with getting into Europe, to find a job, any kind of job, to send money back or to send for the rest of the family to join you. Sounds desperate, doesn’t it? These are people desperately trying to live, to make a better life for themselves.”

Schroeder pointed out that this overture not only calls for an expedited process in admitting refugees, but also calls for actions to improve the living situations for refugees in camps.

She concluded her remarks stating, “As a church, we must speak up by choosing welcome, not fear. From the depth and richness of our faith tradition we can stand for the marginalized, the persecuted, and the stranger in need of welcome.”

The final overture advocate was Steven Marsh, a teaching elder from Los Ranchos Presbytery. He shared a story of a Syrian family seeking asylum who attend the Church of the Covenant in Costa Mesa. This family had the means to flee Syria and come to the United States and apply for asylum. They have become a part of the community and life of the church, and have a new-born daughter.

But their appeal for asylum has not been granted, and they run the risk of having to return to Syria in the midst of a civil war, with a baby just one month old. Marsh concluded his remarks by stating: “We all are aware of the basic issues that have rendered current U.S. immigration procedures too slow and in many cases so inoperative as to be ineffective. But to be unable to offer asylum to someone who is being victimized by terrorism in their homeland is thus to victimize them once again by a system that is overwhelmed and broken.”

Following the overture advocates’ testimony, the committee amended the overture to include a recommendation from the Advisory Committee on Social Witness Policy (ACSWP) as well as passing a few other amendments that slightly revised the language of the overture, and acknowledged previous statements passed by previous General Assemblies.

The committee voted unanimously to approve the overture. The full General Assembly will consider it later this week.