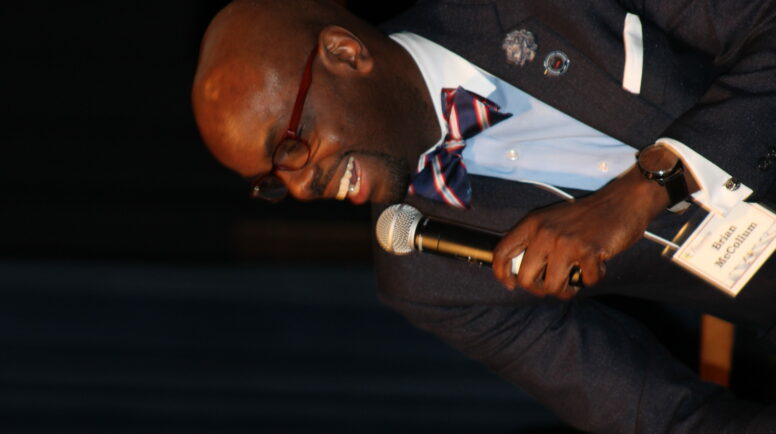 Brian McCollum, Director of Alumni Relations at Princeton Theological Seminary, participates in panel discussion on the topic: Making Missional Disciples Through Racial Justice and the Gospel.

Two hundred pastors, elders and church members gathered February 21-23 in Lakeland, Florida, for the annual national conference of The Fellowship Community. The Presbyterian Church (U.S.A.) evangelicals who identify with the community (whose name is “the most redundant title in Christendom,” incoming president Jerry Andrews of San Diego kiddingly admitted) met together to share, applaud and learn from one another’s efforts in the cultivation of missional Christian ministry.

Under the conference banner, “Deep & Wide: Making Missional Disciples,” keynote speaker Alex Absalom set the stage for the gathering by proposing an outline of what he considers the central endeavors of the church: making disciples who make disciples, engaging in missional ministry and being naturally supernatural. “I believe that disciple-making and mission are completely intertwined. You can’t do one without the other.” He added, “Discipleship is the engine of mission; and mission is the fuel for discipleship.” Then again, he warned that one can’t make disciples and engage in effective mission without the empowerment of the Holy Spirit.

Absalom is a part of the leadership team of Grace Church in Long Beach, California, and leads Dandelion, an organization that equips disciple-making leaders through coaching, consulting and written resources.

Craig Barnes, president of Princeton Theological Seminary, the first evening’s preacher, affirmed with Absalom that the Holy Spirit, given on the first Christian Pentecost, indeed does make people powerful. Compared to the excesses of self-serving power so often seen in the world, “Pentecost is a different kind of power: it drives you outside to the world … it inflames you … . It is not derived power but charismatic power.” He personalized the point all the more: “It changes us, transforms us from asking ‘what’s in it for us?’ to now being empowered by the Spirit of God to be [Christ’s] witnesses.”

Accordingly, he accepted the assignment to present daily Bible studies focusing on the conference theme, expounding upon the first three chapters of the book of Ephesians.   “Ephesians is so, so thick with its understanding of the church, and what God wants to do with the church.”

Alice Ridgill, founding pastor of New Faith Presbyterian Church in Greenwood, South Carolina, preached in the morning worship on the second day of the conference, expounding on Jesus’ call of the two sets of brothers: Peter and Andrew, James and John. “‘Come, follow me,’” Jesus said.

That simple invitation transformed everything for those men. “Three words changed the trajectory of their lives from what they knew.” As for them, so too those words call us to “leave our comfort zone … to do something you’ve never done before.”

Absalom delivered four lectures, each interspersed with interludes of table conversation to respond to his motivational and formulaic proposals. Near the end of his final lecture, he summarized that a pastor’s key to success in promoting disciple-making, missionally-driven and naturally supernatural followers of Christ is to “stir up missional imagination in people.”

Missional imagination was on vivid display as Carlos Emilio Ham, president of the Evangelical Theological Seminary in Matanzas, Cuba, spoke of the 50-plus years of persecution experienced by the Christians in his island country.   In the midst of that, the Presbyterian Church of Cuba adopted the 1977 Confession of Faith, which speaks of the “central centrifugal criteria,” a force that pushes the faithful out into the world. He quoted Leslie Newbigin: “‘The church should not be an institution but an expedition.’”

One featured plenary period of the conference, “Making missional disciples through racial justice and the gospel” was led by a six-member multiracial panel.   Each shared stories of their congregation’s missional disciple-making across historic divisions.

Absent from the conference was discussion of the state of the denomination or of matters of ideological controversy.   That was intentional. As stated in their literature and website, “The Fellowship Community is a network of churches and leaders called together to proclaim the gospel of Jesus Christ by growing in Christ’s likeness, living by God’s word, and joining in God’s mission in the world.”

However, most of the earlier organizations, such as The Presbyterian Coalition, the Presbyterian Forum, and Presbyterians Pro-Life have either shuttered their operations or, at least, become less vocal and confrontational.

Closing preacher, Zac McGowan, associate pastor at the conference’s host church, First Presbyterian Church in Lakeland, and a board member for The Fellowship Community, pulled back the curtain on the community’s relationships with one another and the larger denomination. “We tend to gravitate to people who are like us. We have come to the Fellowship Community because we sense a level of disconnect with our denomination, yet we are still in the PC(USA). I want to tell you why I am still in: I’m still in because I believe in the value of a diverse network, … being with people who differ from me on a number of issues … but want to see the kingdom come to earth as it is in heaven.”

As the incoming president of The Fellowship Community and, for many years, the former moderator of the Presbyterian Coalition, Jerry Andrews lifted up the organization’s commitment to bearing witness to a strong theological center to their mission. “We want to get the gospel right. We engage in the theological project. What does the faith? The church has a faith. We want to remind the church about that.”

Fellow board member, Donna Marsh, from Washington, D.C., assured that The Fellowship Community is loosely organized, that it is moving into a virtual office with a part-time director (Nicole Lock serves as interim director). She also assured that while some churches have formally joined The Fellowship Community, some pastors have joined individually without their congregations, especially in contexts where such a proposal would be controversial. And the organization’s resources are available with or without any formal affiliation.

Jack Haberer is the pastor of First Presbyterian Church in Allentown, Pennsylvania.