LOUISVILLE (PNS) President Donald Trump’s decision to withdraw the U.S. from the Paris climate accord is being met with harsh criticism from church leaders who have been strong advocates for the agreement and environmental causes. The president announced the decision yesterday saying the agreement favored foreign countries while hurting American workers. 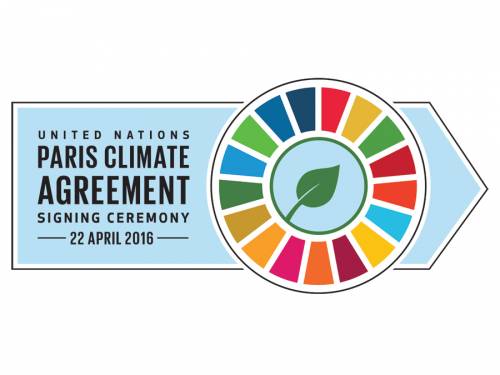 “The president’s statement is a disappointment and represents a setback to our work as well as the work of other interfaith and ecumenical groups on the issue of the environment,” said the Rev. Dr. J. Herbert Nelson II, stated clerk for the Presbyterian Church (U.S.A.) “But we will not be deterred. We will continue to work toward building an environmentally safe world, creating jobs and a new economy based on clean air and building on a more environmentally safe nation and world.”

Nelson recognized leaders within the PC(USA) that have dedicated years working toward cleaner air.

“I’m grateful for the work the PC(USA) has done with regards to climate change and environmental issues, through its continued work across the globe,” he said. “Specifically, I’m grateful for the delegation that went to the Paris accords and represented us well, setting the tone for the current work that we are doing.”

In December 2015, two Presbyterian staff members, Rebecca Barnes, who served as associate for Environmental Ministries, and Bill Somplatsky-Jarman, former coordinator for Mission Responsibility Through Investment, attended the 21st Conference of the Parties (COP 21) in Paris. The two, along with other faith-based representatives from nearly 200 countries, discussed the impact of climate change and possible solutions.

During COP 21, the PC(USA) delegation discussed how the church’s work is affected by climate change. Barnes said more than half of all the international grant proposals received in 2015 by the Presbyterian Hunger Program (PHP) made “at least a mention” of the worsening effects of climate change on food and water scarcity. She added that Presbyterian Disaster Assistance responds to national and international disasters – both natural and human caused, and the number of violent weather events has increased in recent years.

Barnes, who now serves as coordinator for the Presbyterian Hunger Program, says this is a moment to lament, to raise a moral voice about the ongoing imperative for climate action in every nation, and to move forward in hope and action.

“When I attended the United Nations climate talks, I was very impressed by the cooperation, hard deliberations, honest conversations and hard-fought agreements that the world’s nations came to,” she said. “Being there in person was impressive – to see businesses, governments and citizens come together in common cause for all of our well-being.”

“Those of us who represented the religious communities from the U.S. spent much time in prayer as well as arguing for the moral mandate to care for the poor and vulnerable who suffer the most from climate change,” she said. “We believe as Christians and as American citizens that it is our sacred obligation to do our part in the world’s healing because our country has done much to hasten climate change with our greenhouse gas emissions.”

Other faith-based groups are also weighing in on the president’s decision. The ACT Alliance, World Council of Churches and the Lutheran World Federation (LWF) have released statements expressing their dismay, adding that the decision “goes against global commitments to address climate change.”

“The move by the President of the United States flies in the face of ethics and Christian values,” said Rudelmar Bueno De Faria, ACT Alliance General Secretary, in a press release.

“Addressing climate change equals protecting human beings, their workplace and the economies of the world. The LWF will continue to promote climate justice, as an issue of intergenerational justice, in the conviction that creation is not for sale,” said Martin Junge, LWF General Secretary.

“This is a tragedy, missing an opportunity to show real, accountable leadership for the future of humanity and our common home. This is a decision that is not morally sustainable. The struggle for climate justice has to continue,” said Olav Fykse Tveit, World Council of Churches General Secretary.

“We have to continue to make statements by both our actions and in our continued pressure on the administration to begin to look with some clear eyes as it relates to the environment,” he said. “This is going to be a tough time with this administration and there is a great deal of opposition to the social justice issues we’ve been engaged in for the past 50 to 60 years.”

Nelson adds that church leadership alone can’t make change, it must also come from the congregations. “One of the great challenges is to be vigilant in our focus forward to continue to rally Presbyterians and local congregations and communities to not only be aware of these issues, but study them as part of their own spiritual and religious growth and development. We see this as a way that we are giving life to this planet and the people.”

Nelson says the church needs to be a part of the broader challenges through active engagement on the ground on the environment as well as other issues the church cares about. “We need to tighten our belts and really begin to engage as the Bible reminds us, that we need to put on the full armor of God and be vigilant in our efforts to speak truth and love to power.”

The Paris agreement was signed by 195 countries. The U.S. joins only Syria and Nicaragua as opposed.