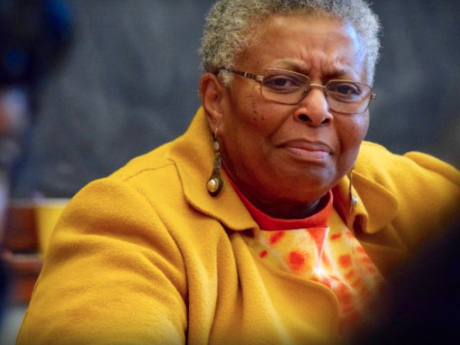 LOUISVILLE (PNS) — The Rev. Dr. Katie Geneva Cannon was ordained April 24, 1974, in Shelby, North Carolina by the Catawba Presbytery, in the Synod of Catawba. According to the Presbyterian Office of Information, the United Presbyterian Church listed 154 white women as ordained clergy at that time.

Presbyterian News Service asked Cannon to reflect on her ordination, in light of her life experiences, as African American History Month and Women’s History Month are celebrated in February and March respectively. Her response is below:

When I think about my 44th anniversary as an ordained clergywoman, I simultaneously recall, reconnect and remember antecedents. As Toni Morrison says, “there is always a ‘before’ that makes our ‘beginnings’ possible.”

The before that makes my beginning possible, the specific antecedents of my ordination, are directly intertwined and inseparable from the historical fact that African Americans have been part of the Reformed faith tradition since the establishment of the first Presbyterian Church in North America at Southold, Long Island, New York in 1640 to the date of the First General Assembly in 1789. The Rev. Dr. Frank T. Wilson, one of the country’s leading experts on Black Presbyterians and African American Presbyterianism, documents that Black Presbyterians, under a variety of conditions, have been members of the Reformed communion for the past 378 years.

As I examine the “before” of my ordination, I recall being three years old, when my mother enrolled me and my five-year-old sister, Sara Elizabeth, in the kindergarten class at the Mount Calvary Lutheran Church, the only place that provided early childhood education for African American children in Kannapolis, North Carolina. In 1953, my intellectual curiosity was awakened in this formal world of religious learning.

By five, I could recite the Lord’s Prayer, the Beatitudes, Psalm 23, the 10 Commandments and answers to catechism questions, such as “Who is God?” and “Why did God make us?” Looking back, I realize there were a lot of lessons about the attributes of God as creator, God as love, and of utmost importance — God is great, God is good, and we thank God for our food. My mother, father and maternal grandmother were ordained Ruling Elders. Our home was a house of prayer.

Yet from my earliest conscious moments, each night when I said my prayers, I talked to God about the pain of living in a racially segregated world. Using the notion of sin in my catechism class as a lens I wanted to know what wrongdoing my kith and kin had committed that made it a crime for me to swing on swings, slide down slides and build sand castles in sandboxes in tax- supported public parks where white children played. I wanted this good, loving and forgiving God help me understand the entrenched reasons why my signing up to participate in the Kannapolis city-wide spelling contest was a life-threatening transgression. Askew and unjust feelings contributed greatly to who I am.

As a child of the1950s, I grew up in a racially segregated city, state and nation — a world where Black Americans were forcibly restricted to a circumscribed, despised socio-political periphery as second-class citizens, as inferior human beings. The teaching and preaching of warped white supremist theologies designated people of African ancestry as “beast of burdens,” “bodies without souls,” birthed under a curse to be no more than “hewers of wood and drawers of water” situated outside of the story of salvation, now, henceforth and forevermore.

My three sisters, three brothers and I were formed and informed by the Black Church community throughout our existence. We lived in a world of blackness crammed inside of dominating whiteness. Our all-black home church was a member of all-black Presbyterian judicatories. The Black Church and the Black School represented the two institutions where African Americans broke the racist shackles of white supremacist laws and practices imposed on African American people. Defying structural barriers and societal restrictions, the Black church is where church-going African American children participated in Sunday School, vacation Bible School, summer camp, youth fellowship, junior choir, usher board, and in ever liturgical pageantry and recitation program listed in the Christian calendar.

As I grew older and continued my formal education, there was an enormous mandate: if things are not written, they do not exist. During the Period of Enlightenment, powerbrokers used a rigid, metaphysical system based on literacy to determine a person’s ontology. In other words, they argued the essence of human being-ness, combined with the doctrine of imago dei, to be created in the image and likeness of God, is based on the Cartesian assertion, cogito ergo sum, “I think therefore I am.” The evidence we can think is determined by what we write. The logic of such myths and abstract fallacies flow like this: if we can write what we think, we possess memory, history, and culture, and the combination of these capacities means people of African ancestry are not liabilities, but, instead, we are assets to civilization. So, with honesty and precision, we need to map out the real-life consequences of the following soul wrestling question: what does it mean that African American women, men, and children were the only people in the USA explicitly forbidden by law to learn to read and write?

Teaching is my ministry. The above historical facts inform my educational philosophy and teaching pedagogy. Writing is the single most important requirement in all of my classes. Writing enables students to piece together a world that previously existed only in oral fragments. My personal satisfaction in writing, publishing and co-editing books is the dynamic exchange of ideas in research and storytelling. Extending across a wide divergence of times and existential realities, the publications of African Americans open new vistas and offer multivocal interpretations of Scriptures and doctrines. African American scholars of religion provide much needed analyses of traditional theological teachings. We accept the intellectual challenge Dr. Gayraud S. Wilmore extended to us 50 years ago — to think theologically about some of the exasperatingly difficult problems Black people are facing in church and society.

My ministry has progressed steadily since 1974. Today, I am working with a dynamic design-team. We are creating the Center for Womanist Leadership (CWL). CWL will provide co-eds, seminarians, graduate students of religion, clergy and theological faculty with both practical and theoretical tools to analyze the intersecting vectors of racism, sexism and class elitism. By increasing opportunities for conversations between seminary faculty and pastors, between clergy and laity, between adults and youth, participants in CWL conferences, colloquia, symposia and courses of study will learn how to identify, and also withhold obedience from those who have been given official status in institutions and agencies, and yet they defraud and exploit the masses.

CWL is an indicator of my life and ministry coming full circle. It is the proper space and intellectual center to debunk the matrix of racist sexism and sexist racism. The Center is where I will continue mentoring the next generation of scholars and religious practitioners who want to learn how to demystify hidden manifestations of systemic oppressions and address with seriousness, persistent and effective strategies of justice-making.