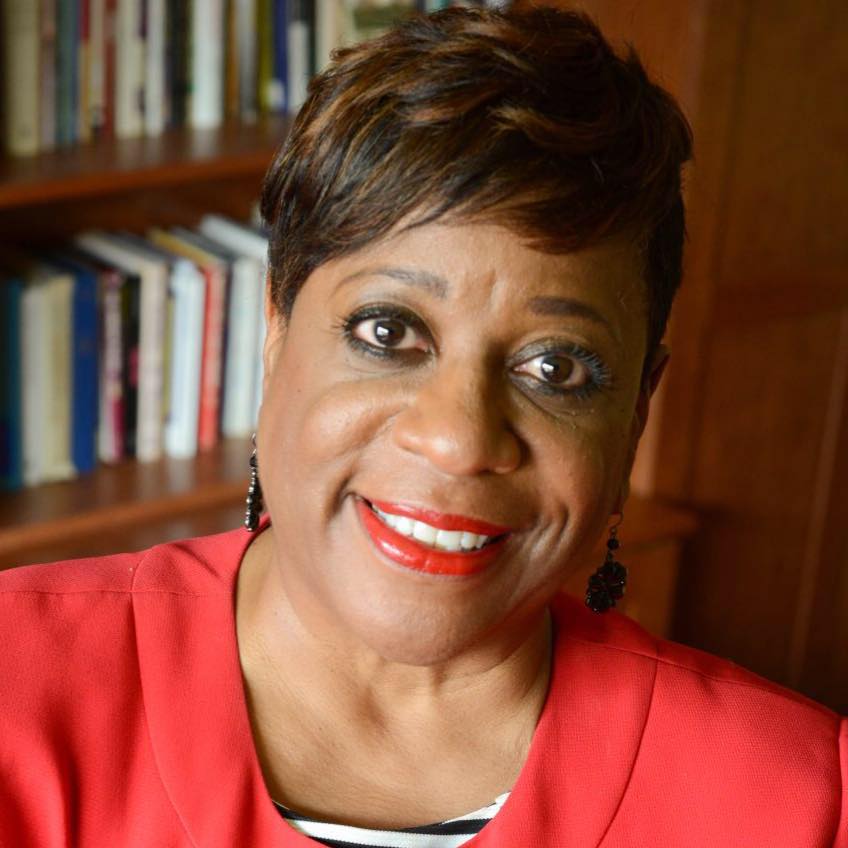 Diane Givens Moffett, a pastor from North Carolina with experience in faith-based advocacy and interfaith work, has been elected the next president/executive director of the Presbyterian Mission Agency.  Moffett will serve a four-year term beginning on June 11, 2018.

Moffett, who’ll turn 59 later this month, has served as senior pastor of St. James Presbyterian Church in Greensboro, North Carolina, since 2005, and is moderator of the executive council of Salem Presbytery and a former moderator of the presbytery.

At the national denominational level, Moffett served as chair of the Climate for Change Task Force of the 2008 General Assembly, which assessed progress in cultural proficiency and changes needed in the six Presbyterian Church (U.S.A.) agencies; as vice president of the National Black Presbyterian Caucus; and as a member of the African American Advisory Committee for the PC(USA).

The board’s executive search committee announced its selection of Moffett as its nominee during a conference call of the board May 8. The Presbyterian Mission Agency Board voted unanimously during that meeting to elect Moffett. Her election as president/executive director is subject to confirmation by the General Assembly when it meets in St. Louis June 16-23.

If she is confirmed, the Presbyterian Mission Agency (PMA) would have a permanent executive director for the first time in three years – and its first pastor in that role in at least two decades.

Linda Valentine, a lawyer and PC(USA) ruling elder, resigned as PMA’s executive director in July 2015, having served since 2006. Her resignation came after a series of controversies involving the agency — including an ethics inquiry involving the 1001 New Worshipping Communities program that led to four people losing their jobs and to expensive litigation, and a Special Offerings advertising campaign that some denounced as racist.

Moffett brings to the position 30 years of community and ministry experience, including pastorates in Oakland, California, (at Elmhurst Presbyterian from 1987 to 1992) and East Orange, New Jersey, (at Elmwood Presbyterian from 1995 to 2005); and currently in Greensboro, North Carolina.  From 1993 to 1995, Moffett served as executive director of Harbor House Ministries in Oakland, an outreach ministry to a diverse community.

She earned an undergraduate degree from the University of California at Berkeley, and master of divinity and doctor of divinity degrees from San Francisco Theological Seminary.

The congregation she currently serves, St. James, is the same church that the PC(USA)’s stated clerk, J. Herbert Nelson, also served some years before her arrival.

As described in the Leadership Profile, the goal of the search was to recruit a president and executive director with the following assets:

She is the author of “Beyond Greens and Cornbread: Reflections on African American Christian Identity.”

Among her involvements, Moffett:

In 2017, Moffett ran for public office in a competitive race for mayor of Greensboro.

Moffett will have been married to Mondre Moffett – a noted trumpeter, jazz musician who has played with the Duke Ellington Orchestra and music professor at North Carolina Agricultural and Technical State University in Greensboro – for 40 years this August.

The couple has  three adult daughters – Eustacia Moffett Marshall, a PC(USA) minister who is also married to a Presbyterian minister, and who leads Faith Point Fellowship, a new worshipping community for college students  and young adults started by  St. James; and Jessica Moffett-Lee and Kayla Moffett, both teachers in New Jersey – as well as four grandchildren.

They’re a musical family – Diane and Mondre Moffett met when she was playing the lead in a community musical and he was writing the music for the ensemble; his brother, Charnett, and late father, Charles, both are well known jazz musicians; the family has performed benefit concerts.

History of the search

Here’s a little history on PMA’s search for a new director.

Relations between De La Rosa and the Presbyterian Mission Agency Board had become uncomfortable after De La Rosa released a seven-page open letter on June 15 giving his personal responses to the work of the Way Forward Commission. The board’s leadership responded with its own letter a week later, stating that “he was hired to be the face and the spokesperson for the PMA,” and taking issue with some of the conclusions he had reached.

When De La Rosa stepped down, the board named David Crittenden as PMA’s acting director. Crittenden stayed in that role until the end of April, when he resigned for health reasons. The board voted April 27 to name a three-person staff team (Rhashell Hunter, director of Racial Ethnic & Women’s Ministries; Jose Luis Casal, director of World Mission; and Barry Creech, director of policy, administration and board support) to provide interim leadership to PMA until a new executive director is confirmed.

Last Dec. 1, the search committee suspended the search temporarily until mid-February, when the recommendations of the Way Forward Commission and All Agency Review Committee were submitted. The search conducted by the committee last fall did not lead to an offer to fill the position that was accepted – with uncertainty about the national denominational structure being part of the difficulty.

During the May 8 meeting, members of the board’s search committee praised Moffett — with Ramsay saying Moffett had demonstrated imaginative leadership skills and intercultural fluency. For example, when racial tensions ignited between Korean immigrants and blacks after Los Angeles police officers beat Rodney King in 1991, a Korean pastor approached Moffett in Oakland, where they were both working.

Together, they provided leadership during a tense time, Ramsay said — and that was possible because Moffett had already built a relationship of trust with the Korean pastor.

Smith, a member of the search committee, described Moffett as a “calming, believing pastoral presence that exudes faith.”

Before the vote, Moffett spoke to the board — giving honor to her “spiritual mentor and resident theologian,” her maternal grandmother, who prayed and cared for her large family and many others in their Oakland community. “I could just see the transforming power of God in her, and I wanted to know the Lord that she knew,” Moffett said.

In response to a question from board member Shannan Vance-Ocampo, Moffett spoke of her experience with community organizing — starting with the importance of building relationships both “with people with titles and those without,” and of “listening strategically. I seek to get to know as much as I can about the landscape of where I am placed.” Relationships and team building are “what Jesus modeled a long time ago,” she said.

Moffett also said that “conflict can be very creative,” providing opportunities for those involved to look critically at themselves and their work, and to ask, “God, what is it you want to begin to heal?” She spoke of the importance of relationships and respect even in difficult times, saying that “Christian endeavor is about relationships with God and one another,” and with “the planet we are on.”

Jan Edmiston, a board member and co-moderator of the 2016 General Assembly, told Moffett: “I’m so thrilled. I can’t tell you how exciting this choice is.”