ST. LOUIS — Bart Smith, a teaching elder from De Cristo Presbytery, argued that “God’s people” should mince no words in calling out the federal government for separating children from their parents and detaining families in prison-like conditions. 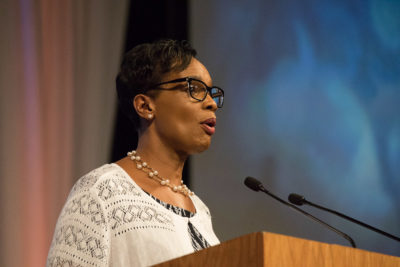 The 223rd General Assembly of the Presbyterian Church (U.S.A.) endorsed that line of thinking June 21 with a 484-34 vote for a resolution that calls for an immediate end to the government’s zero-tolerance policy toward families illegally entering the United States. The resolution also calls for federal authorities to promptly reunite parents and children who have been separated and to place families “under the care of the community,” rather than in detention.

The assembly approved an amendment Smith offered that puts a sharper edge on the resolution as passed by its Committee on Peacemaking, Immigration, and International Issues. The amendment condemns an executive order, newly issued by President Trump, that would end the separation of families at the border, yet do nothing to reunite more than 2,300 children who have already been separated from their families under the president’s “zero tolerance” policy toward illegal immigration. 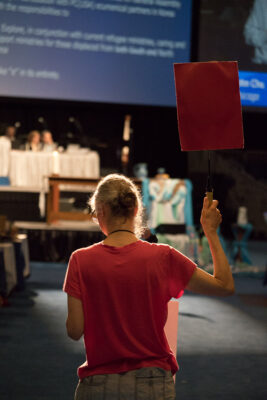 “Even if their children are with their parents, do they belong in cages, in prisons, in tents?” Smith said on the floor of the assembly. Given that prospect, the expansion of detention facilities amounts to “a bait and switch,” he said.

As adopted, the resolution calls on the government to ensure that parents in custody know the location of their children, facilitate regular communication between parents and children and ensure that families in detention have access to attorneys. It also says the government should not use the promise of reunification with children as a ploy to get parents to plead guilty to a crime.

The resolution calls for churches and individuals to advocate for passage of legislation in Congress that would strip federal authorities of the power to separate families.