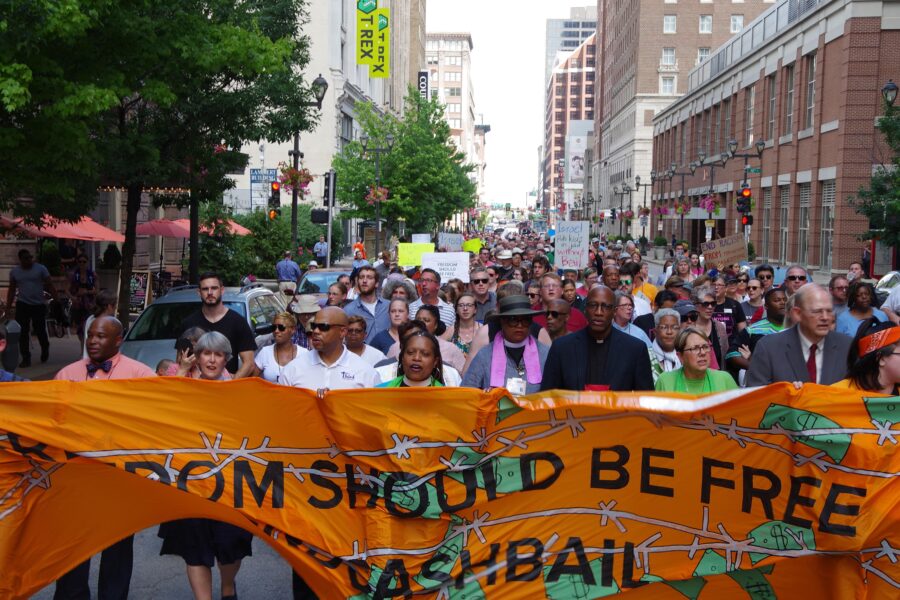 ST. LOUIS – Hundreds of Presbyterians gathered in the convention center on the afternoon of Tuesday, June 19. However, instead of sitting down, engaging in parliamentary procedure and passing overtures and resolutions, they filed out of the convention center chanting, singing, and holding signs. 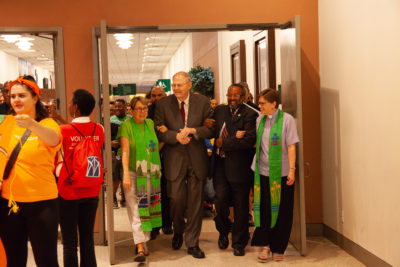 They marched over a mile through the streets of downtown St. Louis where the temperature was 94 degrees with a heat index surpassing 100 degrees. The heat didn’t dampen the spirit of the crowd, who boldly chanted “End cash bail!” as they made their way to the City Justice Center. They were there to deliver a message – and a check for $47,200 for bail relief. The money came from the offering collected during the assembly’s opening worship. The offering taken during opening worship at previous assemblies has generally totaled $13,000-18,000. This offering was more than triple that. Working with local networks in St. Louis – the Arch City Defenders and the Bail Project – the offering will purchase freedom for people held under bench warrants and minor offenses as they await trial.  It gets them back to their jobs, to their families and to their communities.

On Monday, June 18, the night before the march, Presbyterians gathered in the exhibit hall to paint signs and banners for the march. They were joined by local “artivisits” Jelani Brown, Elizabeth Vega and Kristina Vidovic. This collective of young adults came together following the events in Ferguson. They help plan and implement public demonstrations and marches. Elizabeth Vega said, “Art is the heartbeat of any direction action. When you have people come together, you can generate solidarity and collaboration. Art-builds like these help us channel our despair and give it meaning.”

Traci Blackmon, executive minister of justice & local church ministries for The United Church of Christ and a resident of St. Louis, also stopped by to encourage the Presbyterians and “artivisits.” Erin Counihan, pastor of Oak Hill Presbyterian Church in St. Louis, invited these local partners to join with the Presbyterians.

On Tuesday, June 19, with the banners and signs made the night before, hundreds of Presbyterians made the one-mile march from the convention center to the City Justice Center. The Office of the General Assembly coordinated with the city of St. Louis to plan the march. The city provided police on bicycle and in cars to help block streets and control traffic. People came out of restaurants and businesses to observe the march. Local news media also covered the event including two television stations and a reporter from the St. Louis Dispatch. 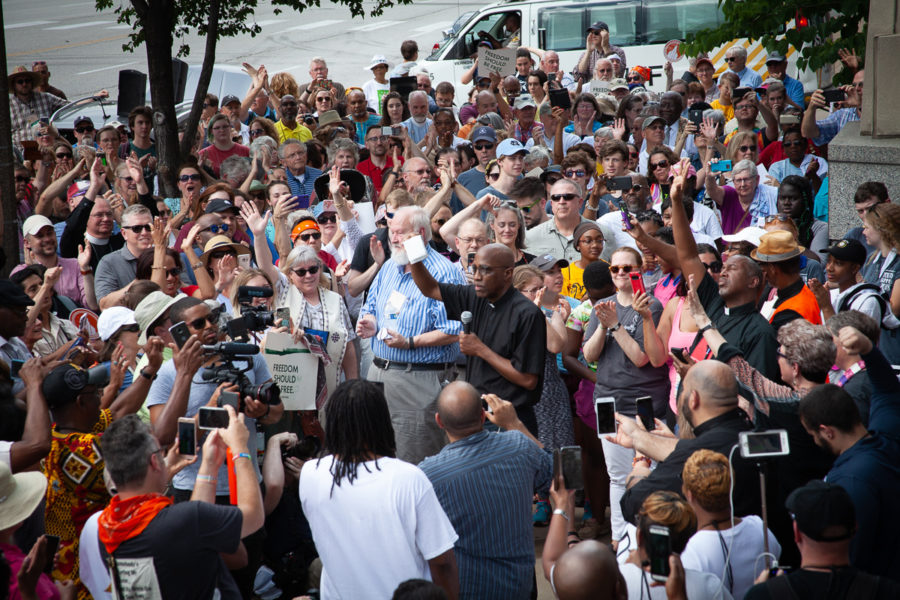 Once the marchers arrived on the steps of the City Justice Center, J. Herbert Nelson gave an impassioned speech in front of the building: “We are making a declaration in this era that we will return to the justice understanding of our faith that we had back in the 1960s when our stated clerk marched with Martin Luther King, when our stated clerk stood on the Lincoln Memorial and marched with ‘Jobs and Justice.’ We are returning to the days when we can actively engage all over this country, calling on the powers and principalities to release those from captivity, and to allow them to be in a place where they can make a life for themselves. … We are here in a place where folks are locked up. Folks locked up, nobody to love them and care for them. That’s what Jesus meant when he said ‘release the captives.’ 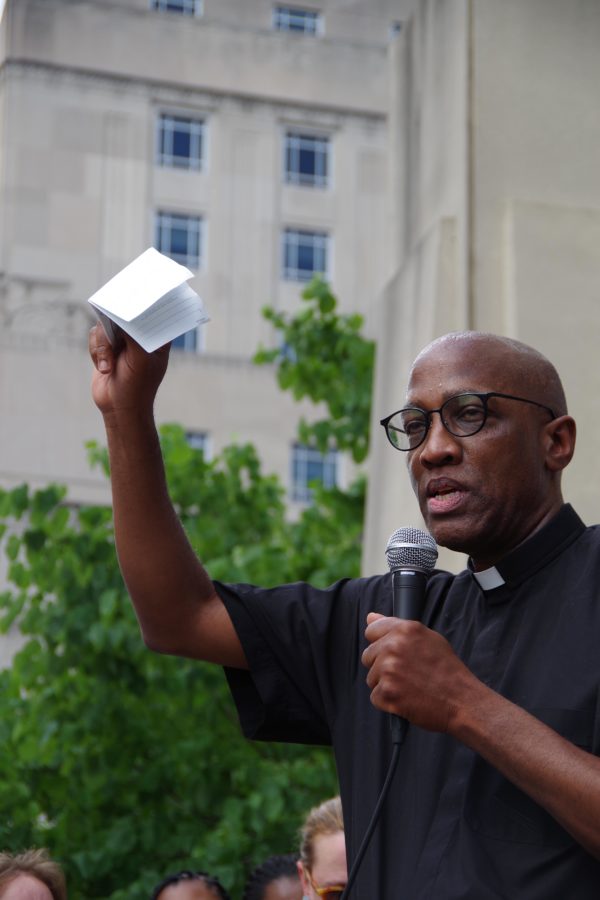 “And he called upon people just like all of us gathered here, in church and out of church, to get together just like we are doing, across the boundaries of race and socioeconomic status, and of all of the labels placed on us. God is saying “Take the labels off.” We are one people, and we all deserve to be free. And that is the message we have come here today to proclaim. We didn’t just come to make noise down here, that’s not enough. We came to get these folks out of jail. We have brought with us today $47,000. This came from Presbyterian all over the country, who out of the depths of their hearts know that this is an injustice. …

“We are thankful to this community for embracing us, for bringing us here, and for joining us in this possibility, standing with us, and sharing with us how to do what we need to do in the 21stcentury. For it’s not about us coming and telling you, but learning from you what 21stcentury justice advocacy is all about from those of you on the ground right here. And I want to challenge all the members of our denomination, when you go back home, find some young activists that know how to do this work. … Take it back to your church, and watch how many people show up on a Sunday that didn’t show before. … 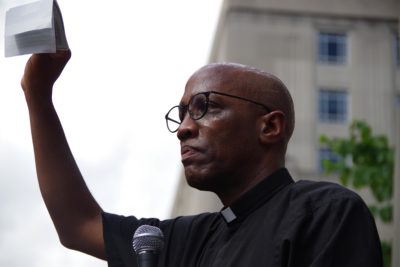 “It’s not about talking any more. It’s not about building big sanctuaries, it’s about building a heart and passion for ministry and the love of Jesus that drives us out of the church and into the streets. From institutions to organizers, building bridges of hope and standing firm in the liberty where Christ Jesus has set us free.”

Jimmie Hawkins, director of the Presbyterian Office of Public Witness, closed the gathering following speeches by local activists. Hawkins stated: “We need to lift our voices with those who are incarcerated simply because they don’t have $50 to post bail before their trials. We are here today to stand because we know there are not only human beings in that place, but Jesus is in that place too. Jesus said, ‘I was in prison, and you came to see me.’ So when people ask why you came to the jail today, tell them, ‘I was looking for Jesus.’ ”

One of the marchers was Rick Ufford-Chase, moderator of the 216thGeneral Assembly. Ufford-Chase pointed out that one of the committees meeting in the convention center was considering a report from the Way Forward Commission. He wondered aloud, “Perhaps this kind of movement is actually the ‘way forward’ for our church in the 21stcentury.”