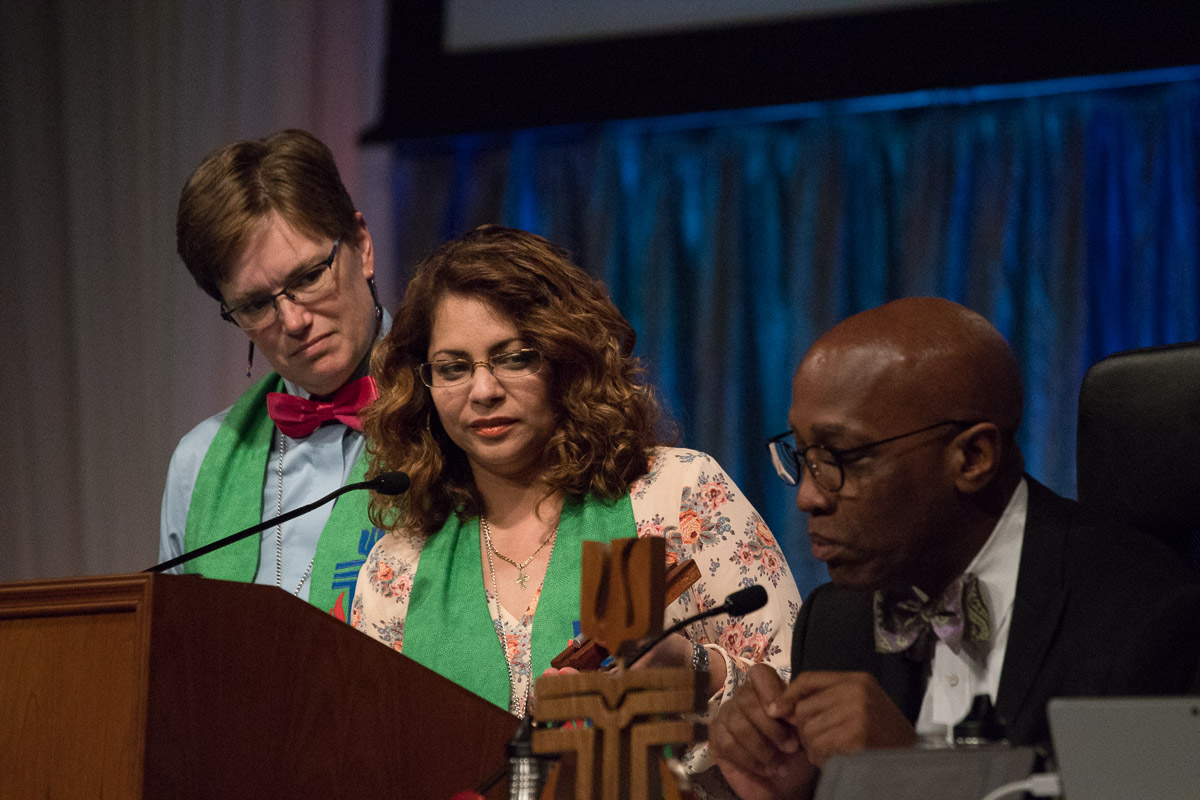 ST. LOUIS — It was close to midnight June 22 when J. Herbert Nelson, stated clerk of the Presbyterian Church (U.S.A.) sounding solemn, announced from the podium of the 223rd General Assembly that he thought the commissioners had just experienced something never before seen in the history of the church.

The laughter from the assembly floor was colored by the memory of prior years when divisions over how the church should contribute to peacemaking efforts in Israel-Palestine spilled over from committee meetings onto the assembly floor and often seemed to overshadow much of the other business commissioners had to deal with.

The contrast with the speed and ease of the assembly’s handling of Middle East issues this year might have been a little misleading. The committee that dealt with those issues had some weighty matters to sort through, but its members were able to come to a near-consensus on some of them, then post them on the assembly’s consent agenda.

The only items from the Middle East Issues Committee that drew something approaching the highly charged floor debate that such issues have elicited in the past were two commissioners’ resolutions. One dealt with recent violence along the border between Israel and Gaza and another with reconciliation ministries in Israel and Palestine.

The resolution dealing with Gaza had its origin in a six-week campaign of protests called by Palestinian organizers the “Great March of Return.” The protesters demanded that Palestinian refugees and their descendants be allowed to return to their former homes in what is now Israel. Israeli soldiers responded with sometimes deadly fire when protesters approached the border.

The resolution cites the killing of more than 20 Palestinian medics serving the wounded, and it calls for inquiry into violations of international humanitarian law by the Israeli military. In all, 131 Palestinians were killed in unrest near the border between March 30 and June 7, according to the United Nations Office for the Coordination of Humanitarian Affairs. The assembly’s resolution calls for the church to collect a list of names of those killed.

The committee, deferring to some members’ unease with language they felt glossed over Palestinians’ role in inciting violence, inserted a reference to the role of Hamas, the Palestinian faction that governs Gaza, for its role in fomenting violence amid largely peaceful demonstrations by Palestinian civilians. The group also changed wording that implied Israelis deliberately targeted the medics.

The assembly, however, voted to delete the reference to Hamas. Jeffrey DeYoe, a teaching elder from the Peace River Presbytery, said the PC(USA) should avoid using language implying that incitement to violence is “restricted to only one side.” Victor Makari, mission advisory delegate for Israel and Palestine, concurred.

“I hardly need to remind the assembly that Hamas does not have a monopoly on incendiary language,” Makari said. 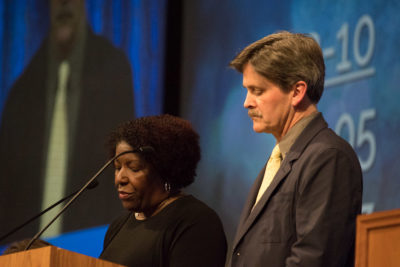 Two teaching elders who were members of the Middle East Committee voiced misgivings about failing to blame Hamas by name for fomenting violence. David Bruce Rose, minister commissioner from San Joaquin Presbytery, said his Jewish friends would notice that “the only people we actually blame by name” are Israelis. Kenneth Kelley, minister commissioner from the Presbytery of Florida, said failing to name a group that incites violence “emboldens those who are using that violence not to come to the table, but to continue to use violence to settle the issue.”

The assembly passed the amended resolution by a vote of 438-34.

The resolution on reconciliation ministries was replaced on the assembly floor by a substitute motion that emphasizes efforts initiated by Israelis and Palestinians to “come together in building honest understanding and peace, working together to address inequality to pave the way to reconciliation.”

Peter Smith, a minister commissioner from the Presbytery of James, offered the substitute language and said it reflected the fact that “necessary and needed change in the Holy Land will not really take place from this side of the Atlantic,” although people outside the Middle East can lend needed support.

“We don’t own the world and we can’t really run it from here,” said Kerry Jennings, a ruling elder commissioner from East Iowa Presbytery.

Robert Trawick of the church’s Advisory Committee on Social Witness Policy (ACSWP) told the assembly that the substitute measure should work better than the original version, which ACSWP had criticized. The vote for the substitute was 458-10.