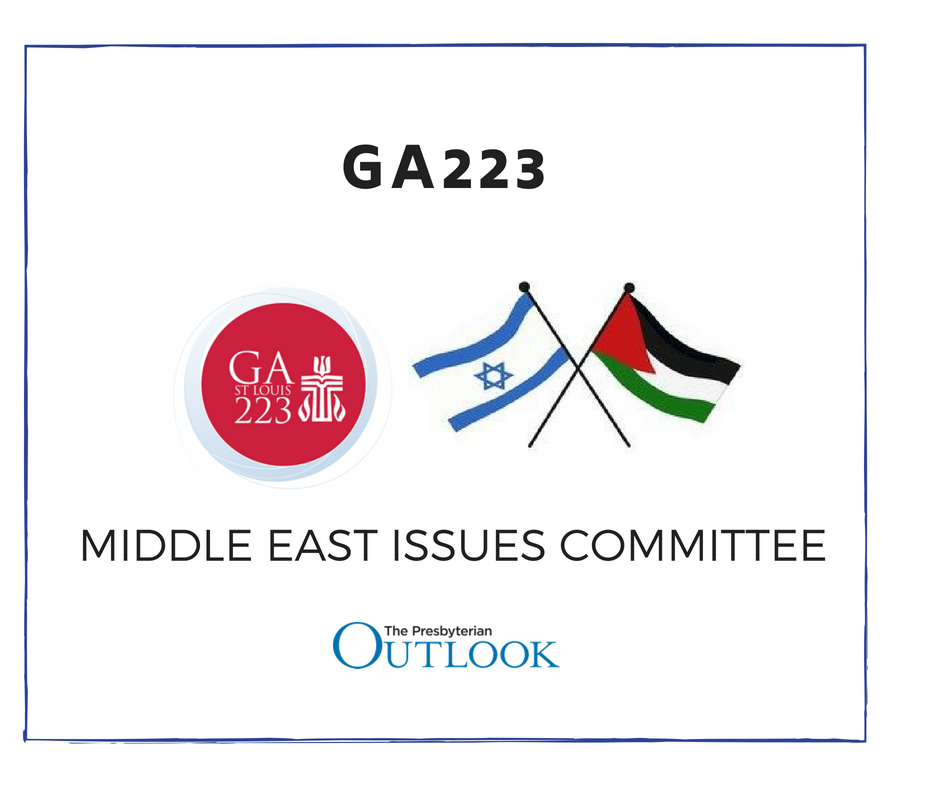 Four years ago, the Presbyterian Church (U.S.A.) used its economic resources to make a limited show of support for Palestinians living in Israeli-occupied territories.

This month in St. Louis, the 223rdGeneral Assembly will consider whether to join a more far-reaching defensive effort on behalf of all Americans who might want to make similar use of their economic discretion.

In overture 12-01, the Synod of the Covenant asks the denomination to resist federal and state efforts to penalize individuals, organizations or companies for taking part in boycotts, divestments or sanctions (BDS) aimed at shoring up Palestinians’ rights. The overture, one of nine assigned to the assembly’s Middle East Issues Committee, says any such government restrictions would violate the First Amendment.

Two pending measures in Congress (Senate Bill 270 and House Resolution 1697) would make it illegal to support a boycott against a country friendly to the United States, unless that country is already subject to a boycott under U.S. law. Under the Senate bill, violators could face fines of up to $1 million and prison terms of up to 20 years.

The PC(USA) has already taken a guarded step in the BDS direction. That measure, narrowly approved by the 221stGeneral Assembly, pulled the church’s foundation and pension money out of three American companies (Caterpillar, Hewlett-Packard and Motorola Solutions) accused of abetting the violation of Palestinians’ human rights by the Israeli government.

It’s unclear whether that divestment action would fall afoul of the anti-boycott legislation in Congress. The same measure that pulled the church’s money out of the three companies included an amendment stating that the church was not divesting from Israel and was not aligned with the BDS movement.

If this year’s General Assembly takes a stand against government restrictions on BDS participation by Americans, it will have a powerful ally in the American Civil Liberties Union. In July 2017, the ACLU sent a letter to all Senate members that called SB 270 unconstitutional.

“We take no position for or against the effort to boycott Israel or any  foreign country, for that matter,” the ACLU’s letter said. “However, we do assert that the government cannot, consistent  with the First Amendment,  punish U.S. persons based solely  on their  expressed political beliefs.”

More than 20 states have enacted anti-BDS laws. In January, the ACLU helped secure a preliminary federal court ruling that blocked enforcement of a Kansas law that requires state contractors to certify they are not engaged in boycotts of Israel.

A second overture (12-02) from the Synod of the Covenant calls for the PC(USA)’s stated clerk to urge the U.S. president and secretary of state to suspend all economic and military aid to Israel until the Israelis comply fully with the Universal Declaration of Human Rights. Adopted by the United Nations General Assembly in 1948, the declaration consists of 30 articles that spell out rights that are now widely recognized as part of international law.

The recent move of the U.S. embassy from Tel Aviv to Jerusalem, which formalizes the Trump administration’s recognition of Jerusalem as Israel’s capital, could lend extra weight to another overture (12-08). Offered by the Advocacy Committee for Racial Ethnic Concerns, the overture calls for several church study groups to work together on a report that examines the status of Jerusalem and the alleged discriminatory treatment of Muslim and Christian residents of the city and its immediate area, including Bethlehem.

In the lone overture dealing with Middle East issues other than those particular to Israel (12-09),the Presbytery of the Cascades calls for the PC(USA) to petition the U.S. government to work for a “durable ceasefire” in the conflict in Syria. That overture also calls for the U.S. to end the shutdown of its admission of Syrian refugees and “substantially expand” the number of refugees admitted.

According to the Wall Street Journal, from October through December 2017, Trump administration policies led to “a near-total suspension of admissions” of refugees from 11 countries, including Syria. The Journal reported that, for most of this period, people from those countries were admitted only if their presence was deemed to serve the U.S. national interest.

Overtures from the Presbytery of Grace (12-03) and the Presbytery of San Francisco (12-04) both call for the creation of a task force to make recommendations in response to a letter from the National Coalition of Christian Organizations in Palestine.

The letter, addressed to the World Council of Churches and “the ecumenical movement,” condemns Israel as “an apartheid state.” It also urges support for economic and other measures aimed at pressuring Israel to end its occupation of Palestinian territories.

Another overture from the Presbytery of San Francisco (12-05) calls on the denomination’s members, congregations, presbyteries and national staff to engage in “open, truthful dialogue” with Jews about Israeli occupation of Palestine. The measure also asks that Jews be granted confidentiality to voice criticism of Israel.

The Presbytery of Philadelphia sponsored an overture (12-06) that calls on Israelis and Palestinians to recognize the rights of children and avoid using educational materials that “dehumanize” Palestinian or Israeli children.

An overture from the Presbytery of the Redwoods (12-07) calls on the real estate company RE/MAX to make all possible efforts to block the sale and rental of property in Israeli settlements in East Jerusalem and the West Bank.