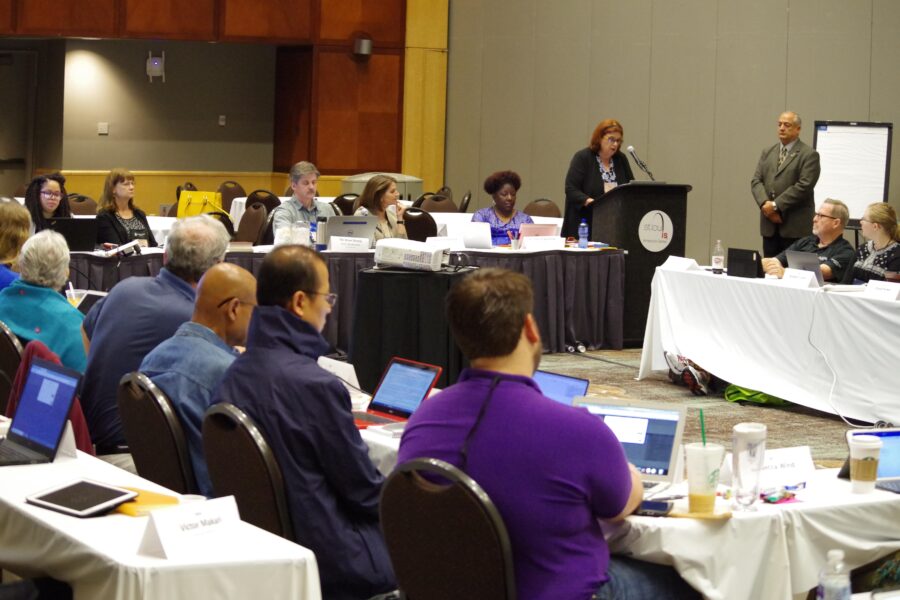 ST. LOUIS — In its final day of work, the Middle East Issues Committee sent forward what its advocates call a free-speech measure — one that could potentially set the Presbyterian Church (U.S.A.) at odds with legislation that has drawn strong support in Congress.

On June 19, the committee endorsed a call for the church to resist federal and state efforts to levy penalties for boycotts, divestments or sanctions (BDS) aimed at human rights violations in Israel and Palestine. The measure (overture 12-01, from the Synod of the Covenant) describes legislation embodied in Senate Bill 720 and House Resolution 1697 as a looming threat that would impose civil and criminal penalties for nonviolent BDS actions.

The overture passed on a 50-2 vote with some slight change of wording. Like other actions passed by the committee, it will go next before the plenary session of the denomination’s 223rd General Assembly.

Referring to the defense of free speech, one advocate told committee members, “we have done this kind of thing for decades — maybe even centuries.”

Catherine Gordon of the PC(USA) Office of Public Witness told the committee that 19 other faith-based groups and denominations have gone on record opposing the federal legislation. If the PC(USA) joined them, she said, it would “help educate the public about what’s going on.”

Senate Bill 720 would levy civil and criminal penalties upon United States’ citizens and companies that participate in BDS policies and strategies, including fines of $250,000 up to $1,000,000 and up to 20 years in prison for those who engage in BDS against Israel. According to the American Civil Liberties Union, as of March, the Senate Bill had the support of more than 42 senators and H.R. 1697 had the support of 247 House members — more than enough to pass in that chamber.

Gordon said the proposed law would not exempt boycotts aimed at Jewish settlements on Palestinian land.

In another matter, discussion grew heated over a commissioners’ resolution dealing with Palestinian suffering in recent confrontations at the Israel-Gaza border.  That measure (12-10) also passed easily, on a 33-4 vote, but some committee members grew uneasy with language in it that they felt cast blame for deadly violence too heavily on one side.

The resolution cites the killing of more than 20 Palestinian medics serving the wounded, and it calls for inquiry into violations of international humanitarian law by the Israeli military. Some commissioners stood firm for blunt language blaming Israel.

“We don’t need to whitewash things that are so offensive to God,” said Victor Makari, missionary advocacy delegate for Israel and Palestine.

But, deferring to some members’ unease with language that they felt glossed over Palestinians’ role in inciting violence, Makari also helped craft a reference to the role of Hamas, the Palestinian faction that governs Gaza, for its role in fomenting violence amid largely peaceful demonstrations by Palestinian civilians. The group also changed wording that implied Israelis deliberately targeted the medics.

Still, some members seemed to feel the resolution was out of balance. David Rose, a teaching elder from the San Juaquin Presbytery, said he would probably vote for it, but it was “with a great deal of sadness, and some amount of embarrassment for the church.”

Kenneth Kelley, a teaching elder in the Florida Presbytery, said that where he lives, people wonder why Presbyterians “are always condemning Israel and never have anything to say about the violence committed by Hamas and the Palestinians.”

The committee disapproved  Commissioners’ Resolution 12-12, which would reject the idea that Israel is “a colonial project” and would instruct PC(USA) agencies and staff to avoid language that carries that suggestion. Specifically, the church would have to stop distributing “Why Palestine Matters: The Struggle to End Colonialism.” The vote to disapprove was 48-4.