ST. LOUIS – The Way Forward Committee took action on the 2020 Vision Team report June 17 – but along the way struggled with some of the same difficulties the Vision Team encountered in drafting its report.

The Vision Team – which is supposed to complete its work in 2020 – had sent a recommendation asking the 2018 General Assembly to forward a proposed draft of its guiding statement to the church for study and comment. That draft statement says that “God calls the Presbyterian Church (U.S.A.) to be Prayerful, Courageous, United, Serving, Alive” – with first letters of those words spelling out the PC(USA) acronym. 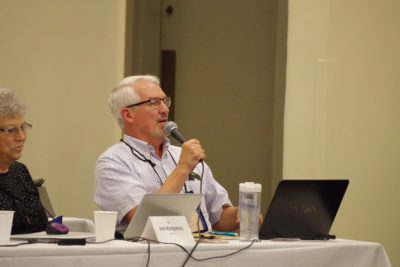 The committee voted to recommend that the 2018 assembly approve the team’s interim report with comment – with the comment stating: “We desire to hear explicit examples of what this would look like in different contexts and how to get there,” and “we would like to hear more inclusion of grace, joy and the Great Ends of the Church.”

The comment also says “we encourage the 2020 Vision Team to make the guiding statement more succinct.”

From the beginning, members of the Vision Team voiced their uncertainty about their mandate: about exactly what the 2016 General Assembly, which created the team, expected it to do. Lisa Juica Perkins, the team’s co-moderator, told the Way Forward Committee that the exact instruction was this: “Develop a guiding statement for the denomination and make a plan for its implementation with all deliberate speed.”

Bernadette Coffee, the team’s other co-moderator, said the team was uncertain about the distinctions between its responsibilities and that of the Way Forward Commission and All Agency Review – “it did not make sense to me.”

Coffee said she came to think of it this way. In the PC(USA), “we’re all in the boat. There are holes in the boat,” some of which need to be patched immediately – that’s what the Way Forward Commission and All Agency Review are working on. “Our job was to look past the holes in the boat and to look toward where we’re going.”

Perkins said one way the Vision Team did that was to hold listening sessions for months with people both inside the PC(USA) and outside the denomination, asking questions such as: “What makes us unique as Presbyterians? What breaks God’s heart in your community? How is the Presbyterian Church relevant or not? What do we need to hold on to and what do we need to let go of? And who is God calling us to be?”

The assembly’s The Way Forward Committee expressed interest in those questions – and also in a comment from the Advisory Committee on Social Witness Policy (ACSWP) suggesting that the assembly receive the Vision Team’s report as information (rather than approve the draft guiding statement), and that the team do more work to “go deeper” in addressing some of the themes that had surfaced in the listening sessions.

Some committee members also said they were confused about whether the draft guiding statement is just the short statement outlining the five words (“the elevator speech,” as Shelli Latham of Greater Atlanta Presbytery put it) – or also three bullet points under each word in the report giving more detail.

Some asked, essentially, why those five particular words – and not others? The Vision Team spent hours knocking around what words to use.

What about grace, one committee member asked, saying “to me that is the most distinctive feature of our denomination.” Could grace be included “a little bit stronger?” 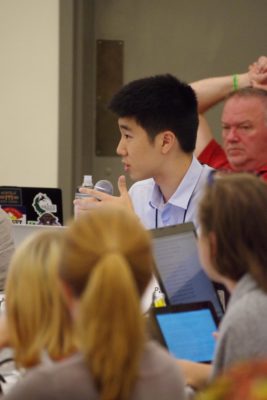 Coffee responded that the Vision Team did talk about grace, but other words emerged more strongly for the team. “We trusted the process,” she said.

Others asked: What’s the purpose of the draft guiding statement? A tool for congregations to use in Bible study and preaching? A marketing tool? A way for the PC(USA) to understand where it’s trying to go?

The ACSWP comment encouraged the Vision Team to dig more deeply into some of the questions that emerged from the listening sessions.

“Some themes point to internal weaknesses, ‘anxiety about finances,’ ‘frustration with systemic and structural barriers to adaptive change that will enable us to meet the challenges ahead,’ ” the comment states. “Other themes reflect a mixture of internal weaknesses and external threats, ‘racism, poverty, income inequality, etc.’ and ‘fear about what shifts and religious culture and decline in church attendance and participation will mean for the future of the PC(USA).’ Still other themes suggest opportunities: ‘a desire to … expand ties to the global church’ and ‘growing excitement about new ways to doing and being church.’

These are important themes to investigate, but we are concerned that the draft guiding statement does not adequately address them.

For example, what “shifts in religious culture and decline in church attendance” ought a vision for the future address?” the comment asks. “To pick up on our example, among the ‘shifts in culture’ are declines in a Sabbath-keeping culture and an erosion of the ecology of church-related institutions (denominationally related colleges, camps, Sunday school, etc.). These shifts call us to discover new ways to do basic tasks. How will we do Christian formation in THIS culture?”

ACSWP’s comment also states: “Even as a Way Forward Commission proposes reorganizing part of our national structure, it is still appropriate to search for new vision for the whole church that might guide this reorganization or even reformation. We need clarity about God’s calling and purpose for the church. We need clarity of vision for how the church may respond to the challenges and opportunities it faces. We also need clarity of vision regarding the structural changes the church must make that will allow it to adapt and organize for mission in a changing world.”

The Way Forward Committee broke into small groups on June 17 to discuss the Vision Team’s proposal – and comments emerging from that resembled many of the discussions the vision team had itself, trying to come up with a short, compelling statement that didn’t leave anything essential out.

“We wanted something that was distinctly Presbyterian,” said Bob Agnew, a minister from Detroit Presbytery.

“I am feeling torn,” said Julie Emery, a minster from the Presbytery of Southern New England. “I feel like it’s a statement that our big tent Presbyterian Church can agree on” yet “I’m looking for something that has some teeth,” that people can get excited about. “I don’t know exactly how to do that.”

Alex Thornburg, a minister from the Presbytery of Des Moines, said he appreciated the Vision Team’s discernment, but like ACSWP, wanted to know more about the themes that emerged from the listening sessions. “We like many here were confused by your mandate and purpose,” Thornburg told the Vision Team leaders. “That may not be your fault.”

Following the 2020 Vision Team action, the committee’s moderator, Cynthia Jarvis, told The Way Forward Committee;  “I hate to disillusion you but this was the easiest item we have.”