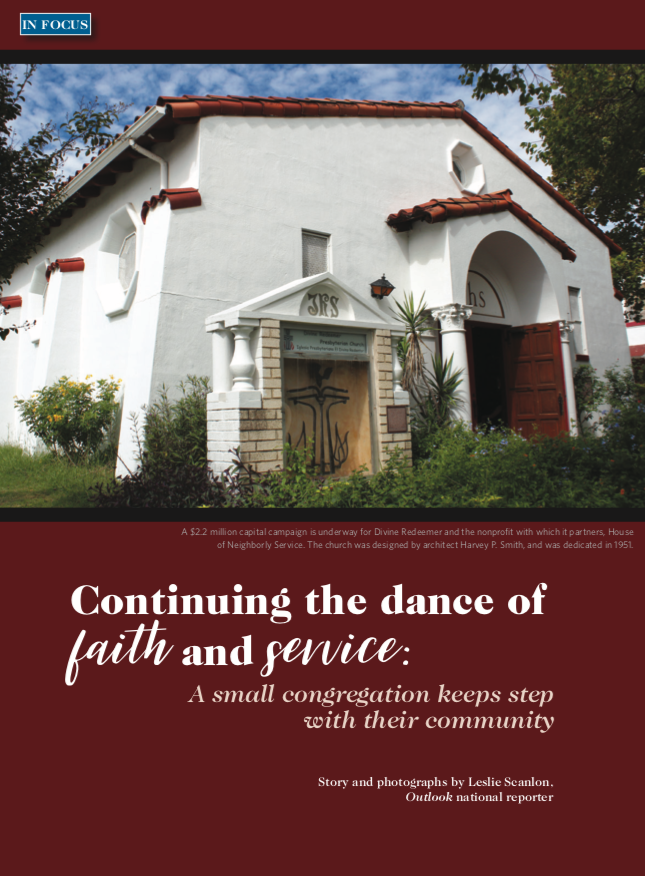 SAN ANTONIO – It’s a question many small congregations face. The neighborhood is economically challenged, the congregation growing older. What’s the future for ministry in this place?

At Divine Redeemer Presbyterian Church in San Antonio, a predominantly Hispanic congregation, the answer has come in part from seeds planted at the very beginning: a century of connection with House of Neighborly Service, a social service nonprofit founded as a Presbyterian mission in 1917.

Divine Redeemer and House of Neighborly Service have danced together for decades — both begun by Presbyterians to meet the needs of Mexican immigrants coming to San Antonio, many of them with limited incomes and educations, but with the highest hopes for their children. The congregation was founded in 1914 by Harry Phillips, a Presbyterian missionary who had served in Mexico, but headed north to San Antonio fleeing the disruption of the Mexican Revolution, as did Mexican immigrants who came to the neighborhood as well.

The congregation has always been small, but the kind of place where people know each other’s names and carry one another’s joys and burdens. The steps of the dance have shifted through the decades, but the commitment to being a presence in the West Side neighborhood of San Antonio and a force for good remains strong.

Irma Diaz de Leon, an 82-year-old retired teacher, is an example of the way a congregation’s commitment to a community can make a difference. Born in the United States to parents who emigrated from Mexico, she attended kindergarten at the House of Neighborly Service because it was the place her mother took her for her first immunizations. She learned English there and, as she grew up, spent time nearly every day at the community center or Divine Redeemer.

When de Leon graduated from high school, the women’s auxiliary of House of Neighborly Service gave her a $25 scholarship, which was enough for her to buy her books in her first year of college, an essential cushion that enabled her to stay in school.

Most of her extended family – including her brothers Hiram and Homer Rivera and sister Lucy Rivera – still attend Divine Redeemer, and the family now includes doctors, lawyers, psychologists and teachers. “A lot of us moved away from the neighborhood, but we remained members of the church,” de Leon said in an interview. And her hope is to “try to do for others what was done for us, so that the neighborhood can continue to improve.”

The mostly-Latino West Side neighborhood is, by the numbers, a place of struggle. About 40 percent of the residents live below the poverty line and nearly half the adults have not completed high school. More than 80 percent of those who use House of Neighborly Services’ programs have family incomes of less than $15,000 a year.

In 1971, House of Neighborly Service incorporated as a separate nonprofit organization, which gave it broader representation in its governance and allowed it to become involved in new projects, including developing low-income housing. Its focus now includes helping to support parents of young children by educating them about depression and stress; operating a child development and treatment center; providing meals and activities for senior citizens; and providing food boxes each week to individuals and families in need.

Divine Redeemer also operates a variety of programs for children and teenagers in the neighborhood through an initiative called ¡Vamos Ya! — including a Peace Pals after-school program for elementary students, with time for homework, recreation, and creative expression, and the summer Peace Camp program. Across the street, the House of Teens program offers everything from homework help and college and career advising to recreation, character development and chances to cook.

A theme: Build peer support to encourage students from the neighborhood to stay in school.

Now, Divine Redeemer and House of Neighborly Service have jointly initiated a $2.2 million capital campaign to renovate space the two groups share, which was jump-started by a capital grant of $250,000 from the National Fund for Sacred Spaces and $500,000 in funding from the city of San Antonio.

The renovation is necessary, said Divine Redeemer’s pastor, Rob Mueller, in part because the buildings are old and need repair. “We have gaping holes in the ceiling, major leaks in the roof,” he said.

But there also are plans to enclose the basketball court to make an event hall, a community gathering space that is in scarce supply in the neighborhood, and could be used for wedding receptions and quinceañeras; meetings on public issues; and expanded services for senior adults.

On Sunday mornings, between the early Spanish-speaking service and the later bilingual service, the faithful at Divine Redeemer sit with one another to eat a breakfast of sausages, biscuits, fruit, juice and hot coffee.

Mueller preaches and prays in both English and Spanish, switching back and forth. The music is joyful, the Bibles in the pews well-thumbed.

During the prayers of the people, congregants speak up from the pews to offer thanks and petitions — praying for those who are ill and families experiencing loss, asking God’s help for a job search, for the nation’s leaders, for the caravan of asylum seekers approaching the Mexican border.

“The anxiety about immigration is present in Divine Redeemer’s life in just about every level,” Mueller said.

What lies ahead is unclear, in part because Divine Redeemer doesn’t have the base of young families it once did. “It’s a church that’s open to anybody,” said Xavier (Buddy) Vazquez Jr., who grew up in the congregation, left when he joined the military and married a Catholic and since has returned. “People in the church have always gone out of their way to make everybody feel welcome,” said Vazquez, who’s 67. “But it’s an older congregation. There are not that many families that have young children.”

Despite that uncertainty, Divine Redeemer, like many small congregations, builds on its strengths: its dedication to the neighborhood, its partnership with House of Neighborly Service, its persistent willingness to try new things.

In the early to mid-2000s, Divine Redeemer used a Presbyterian Church (U.S.A.) grant to hire a community catalyst, who helped the congregation have conversations with people from the community and find ways to “listen for spiritual pregnancies,” said Mueller, the congregation’s pastor since 1994. As a result, “we probably launched 12 new initiatives” — everything from a Spanish-language Overeaters Anonymous group to a Christmas posada. “About a third of everything we launched stuck around,” Mueller said.

One thing that’s been revived: Boy Scout Troop 52, where Vazquez’s father served as troop leader for more than four decades. Vazquez is now the scoutmaster, having returned to Divine Redeemer in 2003 after being severely injured in an accident, and then losing his son in an automobile crash three months later.

“My head was in the wrong place for a long time,” Vazquez said. “That’s what drove me back to my church,” although he lives far across town. “I couldn’t go back to the Catholic church. All I ever saw was a coffin in the front of the church — I couldn’t get past that.”

At that time, another man had attempted to get the Boy Scout troop going, but he didn’t speak Spanish and many of the Scouts’ parents didn’t speak English. So Vazquez took over, following in his father’s path. “I’m teaching them the same things I taught my son, about the outdoors” and about leadership, he said. “I try to teach my boys that you’re not going to get anywhere in life without an education.”

Over the past decade, under Vazquez’ leadership, four boys in the troop have become Eagle Scouts, with a fifth on the way. Two of the four Eagle Scouts attended college, both on scholarships, and two others joined the military, serving in the Army and the Air Force.

Step by step, Divine Redeemer is still trying to do for today’s struggling families what the founders did for Mexican immigrant families a century ago.

Be welcoming. Be of service. Be family. Make small endeavors and $25 scholarships add up.