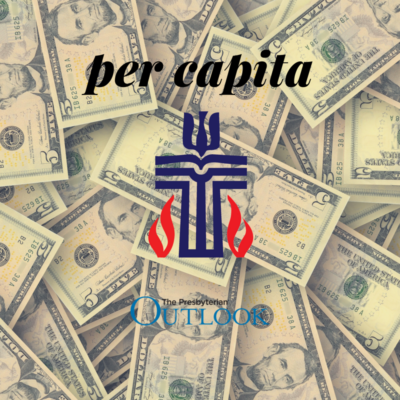 The Special Committee on Per Capita Based Funding and National Church Financial Sustainability has voted to send five recommendations to the 2020 General Assembly.

For roughly the past 10 months, the committee has been holding consultations with presbytery and synod leaders, digging through financial records of the Presbyterian Church (U.S.A.) and talking to denominational leaders – hoping to get a sense of the PC(USA)’s fiscal future and scrutinizing the wisdom of a per-person based funding system in an era of declining membership.

Here’s what the committee voted Feb. 19 to recommend (with some minor wording changes still possible before the final report is submitted by the Feb. 21 deadline). 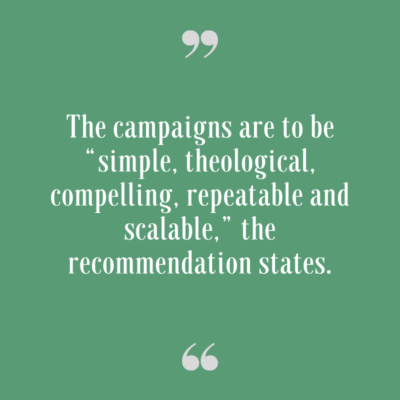 Recommendation: Engagement campaigns. The committee recommends that the 2020 General Assembly instruct the Presbyterian Mission Agency (PMA), in coordination with other agencies and mid councils, to “establish on-going campaigns to resource and equip mid-council leaders and elders to explain the ‘why’ of making one’s local church a giving priority.”

The campaigns are to be “simple, theological, compelling, repeatable and scalable,” the recommendation states.

Also, PMA shall provide financial and human resources to presbyteries and synods for “an ongoing campaign of engagement.”

Recommendation: Funding model experiments. The committee recommends that the moderator or co-moderator of the 2020 assembly appoint a Funding Model Development team to develop possible experiments in new funding models.

The idea: that nine-person team would work over the next two years to develop and explore alternatives to the current per capita system – something the special committee wanted to do, but didn’t have time to pursue.  That team would report back to the General Assembly in 2022 “their progress and any recommendations for moving forward.”

The committee’s report includes an appendix – called the “Handoff Handbook” (Appendix A Handoff Handbook) – which explains the history of that work, provides some answers to the question “Why do experiments?” and gives a brief description of two possible models for experimentation.

Recommendation: Unified budget structure. The committee is recommending that the assembly create a unified budget structure for PMA, the Office of the General Assembly (OGA) and Administrative Services Group (ASG) in the PC(USA), A Corporation. Staff from those agencies, in consultation with staff of the Presbyterian Foundation, would collaborate to determine a system for allocating both restricted and unrestricted funding – which could include “combining, unifying, or consolidating efforts and funding needs between OGA and PMA.”

Recommendation: Unifying OGA and PMA. The committee recommends that the assembly create a commission to unify OGA and PMA into one agency. That commission would work to “determine the strategies and priorities” so “all available dollars, responsibilities and charges are unified and evaluated to provide the best accomplishment of General Assembly goals.”

The commission would have representation from the Committee on the Office of the General Assembly, the Presbyterian Mission Agency Board, the A Corporation board, the special committee, the Moving Forward Implementation Commission and the 2020 General Assembly.

Once unification of OGA and PMA is finalized, the commission “shall determine the structure going forward and present the new Organization for Mission” to the assembly in 2022, the recommendation states.

Recommendation: Overtures. The committee asks that the 2020 General Assembly instruct agencies to determine a financial model by which overtures with financial implications whose mandates include PC(USA) agencies beyond OGA and PMA “receive funding from other sources beyond per capita.”

The 2018 General Assembly created two committees to do this work – one to consider financial sustainability in the PC(USA), one to focus on per capita. Those committees were combined into one in March 2019, then later split into two work teams. The committee released its preliminary report at the end of 2019 – meeting its Dec. 31 deadline – and now has approved its final recommendations to the 2020 General Assembly, which will meet in Baltimore June 20-27.

In doing its work, the financial sustainability team reviewed financial statements from all six PC(USA) agencies, along with per capita projections. The per capita team held listening sessions with representatives from all 16 synods and with at least 108 presbyteries.

“Local congregations were not surveyed systematically, since such a listening session effort would not be from a significant sample size nor would it reflect sufficient regional diversity due to the time restrictions of the mandate,” the report states. “We were intent on working from a genuine set of data that came directly from those most affected, as per capita giving to presbyteries is voluntary at the congregational level, but mandated to be paid to higher councils by presbyteries.”

Funding and structure. The rationale states that the committee concluded that “it is not simply the funding, but the separateness and organization of the national church that is not sustainable into the future” – pointing out that “there is no systemic instrument in place to ensure coordination and cooperation between agencies, particularly as it relates to PMA and OGA between assemblies.”

The committee suggests “a more thorough examination” of how denominational funding is spent.

“It is our recommendation to combine, unify, or eliminate duplicated efforts and funding needs in order to work as a unified church,” the rationale states. “Our recommendations are based on our research that indicated there are significant differences, disparities, and inequalities between how different agencies are funded as well as the use and/or duplication of those funds for similar purposes.”

The rationale also states that “the structure is not set up for the projected needs of a 21st century church. Additional challenges exist with separate agencies beyond PMA competitively engaging in missions.

“While receipts of per capita have been reasonably steady in the past five years, our research made it clear that at the presbytery level, per capita as a funding model has become a burden to presbyteries over the last several decades,” the report states. “Presbyteries that have lost a significant number of congregations and membership have struggled to pay what is due, since the amount due is set by membership data that is two years old.”

Another problem: “Some churches pay per capita and others do not with no apparent penalty for those that fail to pay. Sustainability, in whatever form, requires that ALL churches, presbyteries and synods participate under the same guidelines.”

The committee wanted to explore alternatives to the current per capita system – as the 2018 General Assembly instructed it to do – but ran out of time. It points to the historical underpinnings of per capita: a means of sharing across the church the cost of travel and expenses for commissioners to attend General Assembly.

“Over the generations use of the Per Capita funds has evolved without an in-depth review of its effectiveness in a new century,” the report states. General Assembly per capita is currently set at $8.95 per member, with many (but not all) presbyteries and synods adding their own per capita rates on top of that. The commission found significant variation across the church in how presbyteries interpret and collect per capita – and how they find the funds to send the General Assembly per capita on to the national church.

The warning signs, however, include the expectation of continued PC(USA) membership declines; wide variations in the way per capita is collected; and the reality that “presbyteries are bearing the brunt of making up any shortfalls” in what they collect from congregations, the report states. 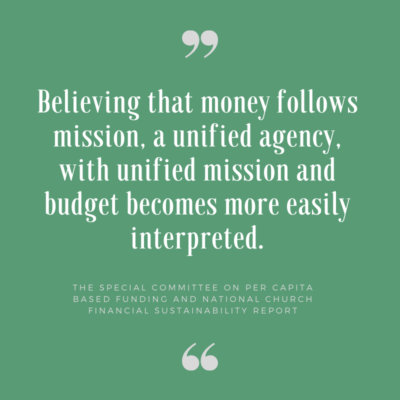 “Mid councils are required to pay per capita, regardless of their receipts, while per capita payments are voluntary for congregations. This causes many mid councils, in order to fulfill their obligations, to cut costs over time. Many did so because they are committed to the connectional nature of the church.”

Mid council leaders voiced frustration at the difficulty of interpreting for congregations the funding and mission realities of a denomination with six agencies. “Overwhelmingly, leaders said, ‘Can’t we have ONE cohesive mission?’ ” the report states. “Believing that money follows mission, a unified agency, with unified mission and budget becomes more easily interpreted.”

Many mid council leaders “suggested looking at a percentage-based model as a system that would be ‘fairer,’ less regressive and would take the pressure off presbyteries,” the rationale states.

“Alternative funding sources need to be considered. For at least 20 years, presbyteries have cut staff, programs, mission, office space and, at the same time, used reserves, mission giving or investments to make up the difference between collected per capita and per capita sent to the national church. Mid councils are as lean as they can be and still function. More and more presbyteries are determining they can no longer function under the current model.”

The special committee’s report also includes seven appendices – summarizing a lot of the research its work teams have done. Among them: