It’s official. The 2020 General Assembly of the Presbyterian Church (U.S.A.) will be held virtually, with plenary sessions June 19 (to elect a moderator or co-moderators) and June 26 and 27 (to consider critical business only).

The Committee on the Office of the General Assembly (COGA) voted unanimously April 21 to approve a virtual assembly because of the coronavirus pandemic — meaning it’s officially set aside plans for the assembly to meet in person in Baltimore June 20-27.

During a 13-minute Zoom meeting, Julia Henderson, interim director of assembly operations, said the meeting was quickly called because April 21 was the deadline by which the Baltimore Convention Center and the hotels with which the PC(USA) has contracted for the assembly would need to provide word if they could not meet their contractual obligations for the event. Maryland Gov. Larry Hogan has said the Baltimore Convention Center is being turned into a COVID-19 field hospital.

Henderson said the officials from the Office of the General Assembly had thought “they would inform us they could not meet their obligations,” but it now appears “we need to let them know we are cancelling because they cannot meet their obligations” – and that decision needed to be made by the April 21 deadline. “We will send them a letter letting them know we are concluding our contractual agreement” for that reason, Henderson said.

Asked whether there are cost implications for the PC(USA) to cancel the contract, Deborah Davies, manager of meeting services for the Office of the General Assembly, said “there should not be, because of the timing of all this.” The denomination has paid a deposit to the convention center, but has not yet paid money to any of the hotels, Davies said. “I believe this means we’re going to be off the hook for any of that,” she said. “That’s our understanding.”

The schedule COGA has discussed for the virtual assembly looks as follows:

COGA will hold a Zoom call April 23 to discuss additional details, including whether to have a virtual exhibit hall and to determine exactly what items of business the 2020 General Assembly will consider. And the Office of the General Assembly is inviting presbytery leaders to attend information sessions in the next week to explain how to prepare commissioners to be part of a virtual assembly, and how to navigate replacing commissioners who may not be comfortable with the new format, Henderson said.

Barbara Gaddis, COGA’s moderator, asked COGA members to give a round of applause to the Office of the General Assembly staff for negotiating all the changes. “I know you are doing whatever you can to keep this thing swinging,” Gaddis said. “Oh my. It feels monumental, doesn’t it?” 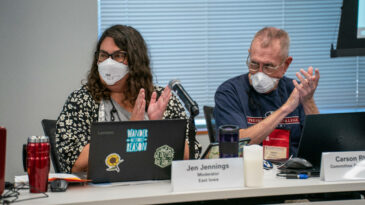