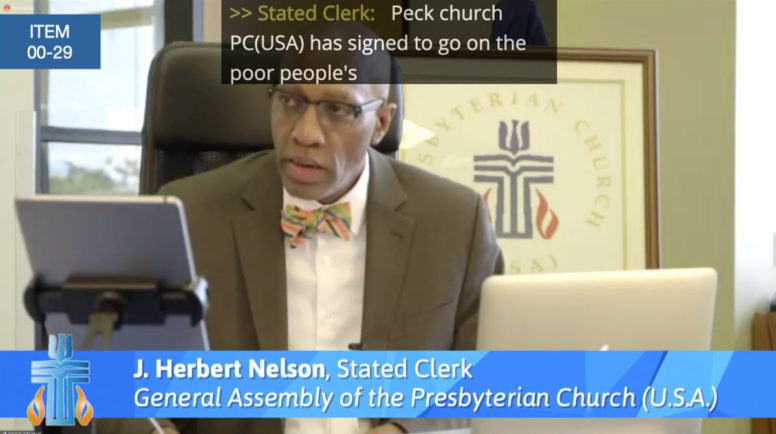 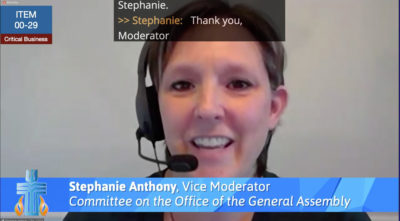 The 2020 General Assembly of the Presbyterian Church (U.S.A.) voted overwhelmingly June 26 to approve a resolution declaring that Black lives matter; confessing that the church has been complicit in perpetuating injustice; and pledging to “confront and dismantle systemic racism” in the church and in society.

According to Megan Acedo, a ruling elder from Philadelphia Presbytery who presented the resolution to the assembly, the document was written collaboratively by representatives of the Presbyterian Peace Fellowship, the Presbyterian Health Education and Welfare Association and the assembly Committee on Business Referrals. 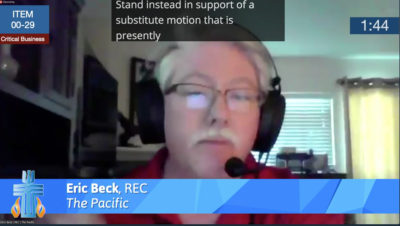 And that resolution is a stronger statement than one originally proposed by the Committee on the Office of the General Assembly — with some commissioners saying, as ruling elder Eric Beck from Presbytery of the Pacific put it, that “the recommendation as it was written does not go far enough” and that the assembly needs to “name, speak to and act” regarding white supremacy, white privilege, systemic racism and especially white silence.

Before approving the recommendation, the assembly supported an amendment proposed by Walter Manuel, a ruling elder from the Presbytery of Southern New England, to change the language from saying that “Black and brown lives matter” to “Black lives matter” — an attempt to say even more strongly and directly that Black lives do matter.

“As a brown person myself, I have faced racism on multiple occasions,” Manuel said. “Yet it is a distinctly different flavor than that faced by the African American community. The black experience in America is defined uniquely, since they were the only race that were brought here  under the very premise that their lives did not matter. And we are still dealing with the fallout from the institution of slavery,” including abuses in the criminal justice system. 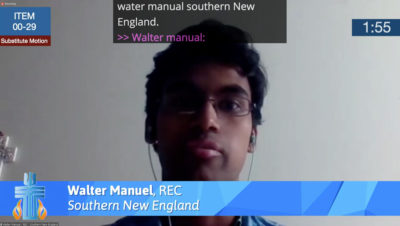 The lives lost to police brutality are overwhelmingly black, Manuel said. “Ahmaud Arbery, George Floyd, Breonna Taylor were black, and Tamir Rice, who would have turned 18 yesterday, was black. … I feel that including other skin colors in this powerful phrase waters down its meaning and takes a step in the direction of stating ‘all lives matter.’”

The current times “call for the church to state unequivocally and without qualification that Black lives matter,” Manuel said.

The resolution calls on the co-moderators of the 2020 General Assembly, Gregory Bentley and Elona Street-Stewart, to, before this assembly adjourns, “facilitate a time of silent vigil of 8 minutes and 46 seconds” — the length of time that Minneapolis police officer Derek Chauvin knelt on the neck of George Floyd, forcing the life out of him as Floyd repeatedly said: “I can’t breathe.”

That silent vigil would serve as “a symbolic representation in solidarity with our BIPOC (Black, Indigenous, People of Color) siblings, and of corporate lament and personal introspection of our complicity in perpetuating systemic racism ad racial injustice,” the resolution states.

That special committee submitted a progress report to the 2020 General Assembly — it’s not due to report to the assembly until 2022. And it released a statement June 26 calling the PC(USA) to a season of repentance.

But Denise Anderson, who is coordinator of Racial & Intercultural Justice for the Presbyterian Mission Agency and is one of the staff support persons assigned to the committee, pointed out that the resolution “really does indeed get at the heart of what the special committee has been called do to,” but also vastly broadens its original mandate, halfway through the committee’s work. Anderson suggested that the assembly seek the committee’s guidance about the implications of expanding the work.

The assembly also approved this resolution as a substitute for another that was offered – which would have directed J. Herbert Nelson, the PC(USA)’s stated clerk, to sign the Open Letter to Our Nation’s Lawmakers on Systemic Racism from the Poor People’s Campaign. 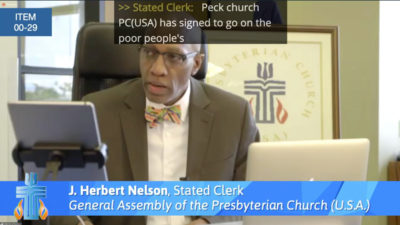 In response to questions, Nelson said he has already signed that letter and that the PC(USA) has supported the Poor People’s Campaign and “the need for transformative change in the United Sates of America.” Signing the letter indicates support but “not categorical agreement with every statement” that is made, Nelson said. And for individual Presbyterians, “it’s not binding on anybody,” Bentley said, after one commissioner voiced reservations about what the document says about, for example, “defunding the police.”

The assembly supported an amendment proposed by Charles Johnson-Kelly, a minister from Pueblo Presbytery, to state that “we believe that the work of attending to the pain, suffering and long-standing oppression of our BIPOC siblings in Christ is central to our work of proclaiming the Gospel of Jesus Christ.”

Kerri Allen, co-moderator of the Task Force on Disparities Faced by Black Women and Girls, spoke against the recommendation, stating that “this denomination continues to say Black women and girls are not important enough to be front and center in our word and in our actions.”

Shortly after 9 p.m. Eastern – about two and a half hours after the recommendation had passed – the assembly considered a motion to reconsider the action, in order to add unspecified language regarding Black women and girls, but that motion failed 212-239. Johnson-Kelly, who made the motion, said, “I was convicted” by Allen’s remarks, and “we should make an explicit statement on this.” But commissioner Karen Allen, a minister from the Presbytery of Coastal Carolina, said the recommendation already includes a link to the report of the task force — which she said can provide a starting spot for Presbyterians wanting to engage with these issues.

On social media, that led to a debate over whether the vote itself is an indication of white privilege — as Mason Warren, a Young Adult Advisory Delegate from the Presbytery of East Tennessee said on Twitter:

Definitely believe we as a body have just failed our BIPOC siblings in Christ, specifically Black Woman and girls. If you want to say that all voices matter in our denomination, then listen to them, whether they be YAADs or BIPOC commissioners. Listen to them! #GA224

Young Presbyterians also voiced frustration that older commissioners weren’t listening to their voices. The Young Adult Advisory Delegates voted 50-19 to reconsider the motion – but immediately after that vote the commissioners voted 239-212 not to. That frustration was amplified because no committees (except Business Referrals) are meeting at this virtual General Assembly – and it’s in committee that Young Adult Advisory Delegates get not only voice but full vote, sometimes influencing the trajectory of an assembly.

Through the ins and outs of parliamentary discussion, it was clear there was a will for the PC(USA) to say and do something — with this assembly coming during a season of the killings of people of color and of protests across the nation. 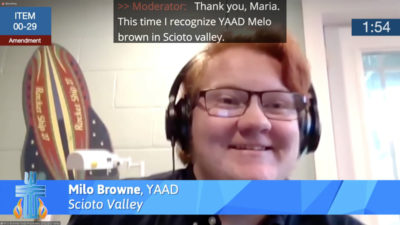 The resolution states that the PC(USA) has “much to lament.  We, in particular white people, and as a predominantly white denomination, must confess our complicity in perpetuating systems of oppression against our BIPOC siblings. The church must be the first place seeking racial justice and reconciliation, the dismantling of structural racism, and the healing of our marginalized communities. It has, unfortunately, not often been so. …

“When our colleagues, siblings, and neighbors protest in the streets to say that being Black should never be an excuse to be targeted and killed, when so many stand in solidarity to say #BlackLivesMatter, and when our own communities are weighed down in grief and anger, it is the time to stand alongside our BIPOC siblings in voice and in action. . . . We have said a lot and not done enough,” and can’t wait until the assembly two years from now to do more.

“Right now is the time to act on this,” said Milo Browne, a Young Adult Advisory Delegate from the Presbytery of Scioto Valley. “It is inexcusable for us to stand in silence as people are being killed.”