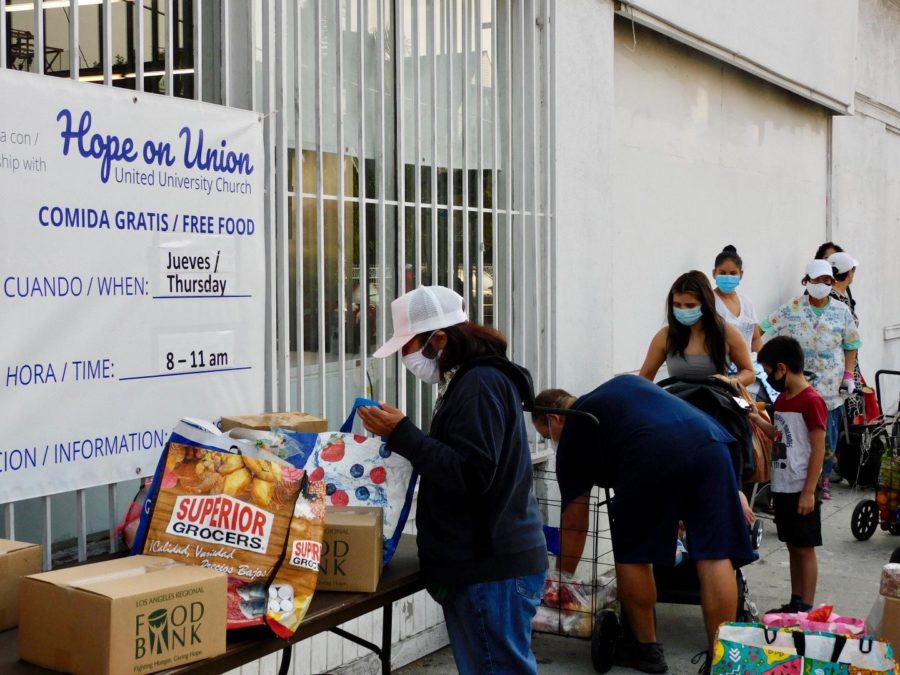 Over the last several months, as COVID-19 has turned so much upside down, the Presbytery of the Pacific has experienced in Los Angeles what a lot of other communities have seen: more hungry people needing help. In July alone, the churches in the presbytery provided food to more than 49,000 food-insecure people.

What’s also emerging: new creativity in the way congregations are responding and developing connections with the community. Even when the pandemic subsides, things will not be the same.

Feeding this many people depends on partnerships. The need evident in the lines at food pantries is leading Presbyterians to ask others for help, to work collaboratively and to network in new ways — sometimes with the ideas for what might be possible coming from the people who are standing in line to receive food.

“We saw an initial surge in April” from those who had lost jobs or hours or been furloughed, said Sunny Kang, pastor of Hope on Union Church near downtown Los Angeles. Then through May and the beginning of June, after money started coming in from unemployment benefits and stimulus checks, “we saw the numbers leveling off. The initial panic subsided a little.”

Now, with the $600 per week federal benefits ending and with the possibility of eviction looming, both the numbers of people seeking help and the fear are climbing — with “people driving two hours plus looking for food banks,” Kang said. He recently carried a box of food to a car for a mom, and she was crying as she thanked him. She told him: “This is the food for nine people this week. There are nine of us, and nobody’s working.”

Looking ahead, “our estimation is things are going to get worse in the next couple of months,” Kang said. “The economic divide is just going to be accelerated.”

Immanuel Presbyterian Church, a grand church on Wilshire Avenue in Koreatown, took out the pews from its Westminster Chapel in early July — removing the seating from its smaller worship space, and more importantly, the part of the church that’s air conditioned – and using the reconfigured space to store pallets of food. Immanuel’s food pantry has been serving about 2,000 households a week during the summer – up from about 120 households a week before COVID-19 hit – and shifted its hours from being open one day a week to six.

By the end of August, the demand for food was so strong the chapel warehouse was nearly empty, said Virginia Beaboa, director of operations, who is now trying to broaden her networks with grocery stores and nonprofit contacts to try to replenish the supplies. “We’re seeing new faces we’ve never seen before.”

But this isn’t just a story of a generous congregation removing pews to help hungry people. Immanuel is like a lot of downtown congregations: a big old church building with a small, aging congregation — with an average weekly attendance of 35, even before COVID-19. Increasingly, as the congregation has grown smaller, it’s been the use of the building itself  – leased out to tenants and rented for concerts, as a filming location and for other events – that’s helped pay the bills and support the staff, Beaboa said.

Last February, she had been on the verge of shutting down the food pantry — it was only open one day a week, there were complaints from the neighbors about homeless people congregating, “it was taking a lot of time, there was not enough support.”

More people showed up, the pews went out, new connections were forged. Beaboa heard that the Pentecostals were distributing food, and “I kept asking and asking and asking until I got connected with their food pantry director.” Volunteers came from the Muslim community, from suburban Presbyterian churches, from Cedars Sinai Medical Center.

The Punk Rock Marthas – a service group of young volunteers – has been making more than 5,000 first aid and hygiene kits, handing them out to people in need in the Immanuel parking lot.

The Presbyterian churches in the area have begun collaborating closely — coordinating the distribution of food, of volunteers, of ideas. “It’s forcing us a church to rethink how we do ministry and how to be present in our community,” Beaboa said. “It’s the work of people from all backgrounds and denominations. … Partnership is the biggest thing that comes up in our updates. Over and over again.”

In making those connections, she relies on her background in disaster relief work and creative networking with just about anyone who might help — grocery stores, the health care industry, people in the entertainment, sports and corporate sectors. “It’s all about about finding other people with passion for serving the community,” Beaboa said. “While we are motivated by faith and our desire to show God’s love, others want to give back. It’s about finding the right places to do it.”

Since early August, Westminster Presbyterian, an African American congregation that has been worshipping virtually since the pandemic began, has been handing out food baskets — with Immanuel providing the food and Westminster the volunteers. After so much time apart, this new initiative has given Westminster volunteers a chance to see one another in person at a social distance, Beaboa said.

Before COVID-19, Kang’s church – in a predominantly Hispanic area and with a lot of Salvadoran immigrants – used to set the food out and let people select what items they preferred and needed. “Choosing is very, very important,” Kang said — but with the pandemic, things shifted, supplies of food were limited, and his pantry began boxing up the food in advance and handing out limited amounts.

Now, with partnerships and a better-established food chain, the guests at Hope on Union once again have choice, with the ability to walk through the line and select from staples, fresh produce and frozen meat and fish.  Immanuel stores food in its chapel — “it’s become a walk-in cooler when we have a lot of vegetables that we need to keep fresh overnight,” Kang said.  “That’s a great use for worship space. What more worshipful thing” than feeding people who are hungry?

A leased 40-foot refrigerated container in Immanuel’s parking lot is used as a freezer space. And the food is distributed from there to congregations that need it — with help from volunteers from all over, including Presbyterians from suburban churches and nursing and college students.

Hope on Union is not a traditional congregation. A few years ago, they sold the church building, using the proceeds to buy space in a commercial zone, across the street from a gym, a barber ship, a 99-cent store.

Now Kang knows these neighbors — he brings food to the small store owners.

In the line at the food pantry, he has seen people intentionally take less food to leave more for others, and encourage the elderly and women with small children to go to the front of the line. Some who have lost jobs now volunteer at the pantry — they don’t have money, but they have time. He walks up and down the socially-distanced pantry line, thanking people for coming.

He tells them: “You are enabling us to live out our gospel that we believe in, to show the grace of God.” He apologizes they have to wait in line; thanks them for their patience. He hands out bottles of water, and encourages people to pick a lemon from the tree outside the building.

“The low-income community has always ben plagued with a mindset of scarcity,” Kang said, and the pandemic has made it worse. “One of the roles of the churches is to help people develop the mindset of abundance. … I tell everyone that our work is not giving away food. What we are doing is we are connecting with our community.”

He has plans – nurtured in conversation with the community – for an urban organic garden, tended in partnership with a local school, and a cafe that can be used to provide job training for people with disabilities and for ex-offenders. The idea comes from the neighbors, who said they wanted a gathering space – the café – and an entertainment space where they could hold movie nights for the children. So at night the carts used in the food pantry can be pushed aside, the popcorn machine and outdoor grills fired up.

People from the community are concerned with public policy involving evictions, immigration, mass incarceration — so those justice concerns become the concerns of Hope on Union as well. A monthly outdoor gathering is planned to “listen to each other’s stories and be real,” Kang said.

“We have to reinvent what it means to be church in the urban core,” he said, or “the church is always going to get older and decline. … The old model was the church says ‘This is what the church can offer to the community.’ We just assumed we had the right to be there, and we would know what everybody would want. That is over. Churches are really going to have to listen to the community – to ask, ‘What do you need? What do you want? What can church do to make this community a better place?’ The phrase we are using is we need to earn the right to reach the gospel.” 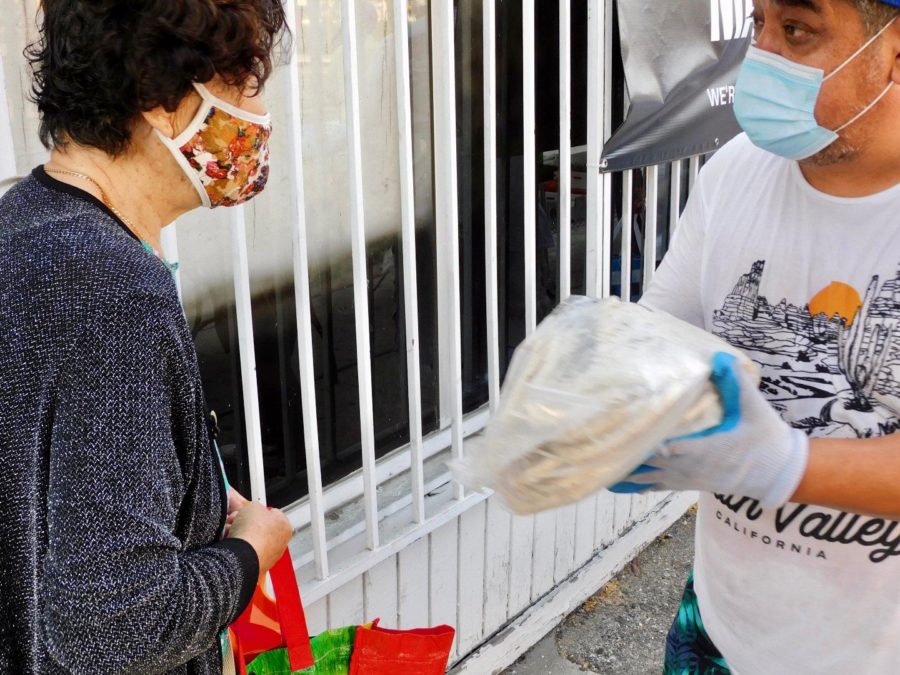 And spiritual vitality will come from partnership, from connecting to the community, from imagination, Kang said.  At the food pantry, “we work side by side with people who are not part of any churches,” some of whom are not Christian.  Feeding the hungry: that’s what church is to him in this pandemic season of isolation and economic struggle.

“Being good to people and taking care of them — that’s as Christian as it gets.” 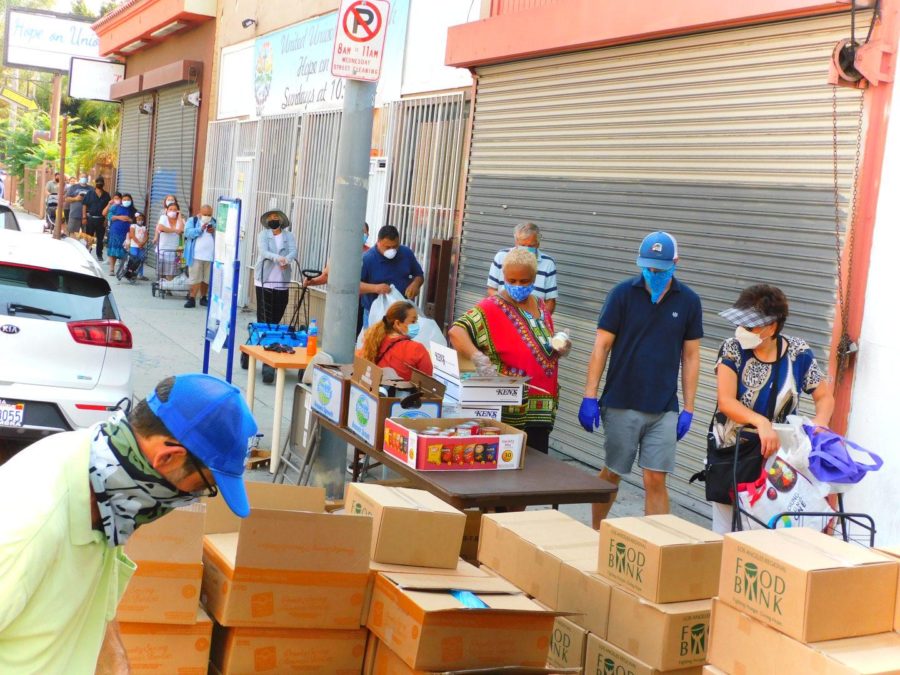