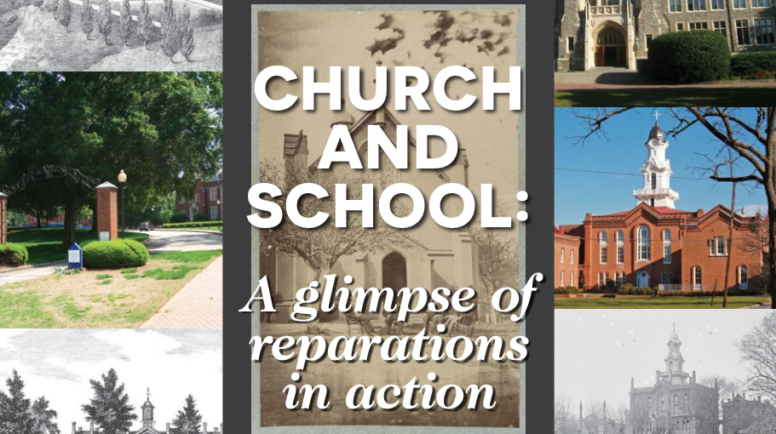 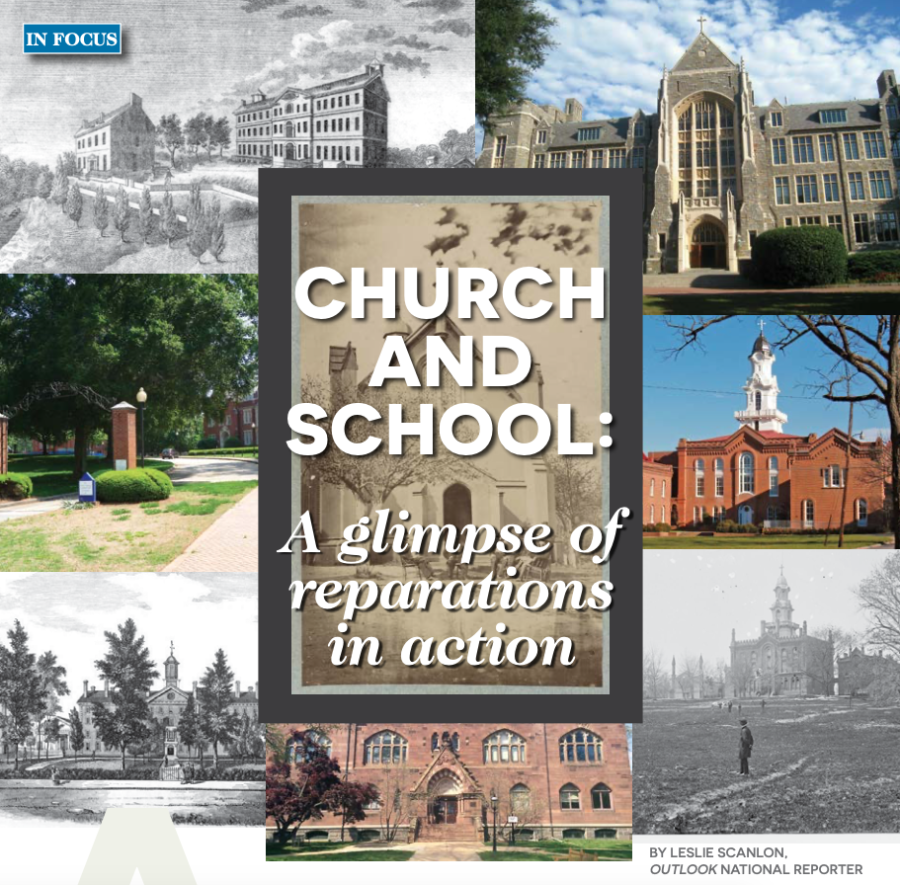 Across the country, universities, seminaries, churches and communities are beginning to investigate and confront their own histories involving slavery — and the question of what reparations are owed.

This summary of some of those actions isn’t comprehensive, as the conversations are ongoing and happening in many places. But it’s a start, giving a sense of both the scope of institutional entanglement with injustice and the struggle to determine what sort of repentance and compensation that history of systemic racism calls for.

May 1969: From the pulpit of Riverside Church in New York, civil rights activist James Forman challenged white churches and synagogues to give $500 million in reparations to Black Americans. A “Black Manifesto” – a proposal for racial justice that Forman released a week earlier – stated, “We know that the churches and synagogues have a tremendous wealth, and its membership, white America, has profited and still exploits black people.”

His audience was not ready to hear Forman’s words; more than half walked out.

May 2019 – 50 years later: The Episcopal Diocese of Maryland approved a Resolution on Racial Reconciliation — committing itself by a unanimous vote to take “tangible actions towards racial reconciliation in our local context,” to continuing conversations around reparations and to encouraging congregations “to examine how their endowed wealth is tied to the institution of slavery.”

That vote followed a series of efforts in the diocese. On Nov. 1, 2014 – the 150th anniversary of the repeal of slavery in the state of Maryland – the diocese held a Day of Repentance and Reconciliation, which included the Trail of Souls pilgrimage: a journey to five sites in Maryland with ties to both slavery and the Episcopal Church. There also has been an ongoing Trail of Souls project, through which 26 congregations dug into their own racial histories — finding evidence of the “servants gallery” now known as the choir loft; the segregated Sunday school and cemetery; the now-defunct congregation begun as a mission to freed Blacks; and the neighborhood in Calvert County with about 1,700 enslaved people in just one parish, and where “many priests during this period owned slaves.”

September 2019: Virginia Theological Seminary, an Episcopal seminary in Alexandria, Virginia, announced plans to create a $1.7 million endowment fund for reparations, stating that enslaved people had worked on the school’s campus and the school “participated in segregation” after slavery ended. At least three buildings on the campus were built with the labor of enslaved persons. The seminary was founded in 1823, but did not admit its first Black student until 1951. Virginia Theological Seminary raised the funds through a capital campaign — considered significant because the endowment is fully funded with money the seminary intentionally generated for this purpose.

October 2019: Georgetown University announced that it would raise about $400,000 a year as part of an effort to pay reparations to the descendants of 272 enslaved people that Jesuit priests sold in 1838 to help pay off debts and secure the future of what’s now the university. “The university itself owes its existence to this history,” historian Adam Rothman told the New York Times. 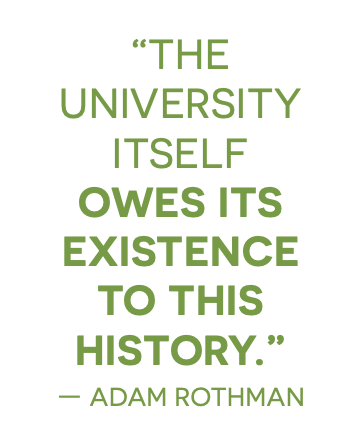 The question of what shape reparations at Georgetown should take has been evolving — in part from pressure from students. In September 2015, the university created the Working Group on Slavery, Memory and Reconciliation, made up of faculty, staff, students and alumni, which examined the university’s history with slavery, held dialogue sessions and met with descendants, and issued recommendations in September 2016. Among them: renaming two buildings that had been named for the Georgetown University presidents who administered the 1838 sale of enslaved Blacks; offering an apology for the school’s involvement with slavery; developing a public memorial to the enslaved; and establishing an Institute for the Study of Slavery and Its Legacies. The university also agreed to give preferential status in admissions to descendants of those 272 who were enslaved.

In April 2017, Georgetown held a Liturgy of Remembrance, Contrition and Hope, apologizing for the 1838 sale.

Georgetown students have pushed the university to go further and act faster — organizing protests and a sit-in in the fall of 2015 that led to the university’s removing the names of Thomas F. Mulledy and William McSherry, the college presidents involved in the sale, from buildings that November.

In April 2019, Georgetown students voted in a nonbinding referendum – with two-thirds voting yes – to add a $27.20 fee per student per semester to their tuition to create a reparations fund to support health care and education programs in Maryland and Louisiana, where many of the descendants of the 272 enslaved persons who were sold now live.

October 2019: Princeton Theological Seminary committed to spending $27.6 million on scholarships and other measures in recognition of the role that slavery played in the seminary’s history. This announcement came three years after the seminary’s president, Craig Barnes, created a committee to study those connections — which produced an audit report that found the school’s history to be a “story of complexity and contradiction.”

Among the audit’s findings: that the seminary, founded in 1812, did not own slaves, and slave labor was not used to construct its buildings. But it benefited from investments held in Southern banks; for a time in the 1830s, “a substantial portion of the seminary’s endowment was invested in Southern banks, which were financing the expansion of slavery,” the report states.

While some of the seminary’s founders and early faculty members spoke against slavery, some used the labor of enslaved persons, and some of the seminary’s donors had wealth generated at least in some measure by slavery — “as much as 30 to 40 percent of the Seminary’s revenue before the Civil War could be connected to slavery,” the report states.

The seminary’s reparations plan, extending to 2024, calls for:

The Association of Black Seminarians at Princeton says that’s not enough and created a petition that calls instead for the seminary to annually set aside as reparations at least 15% of the part of the endowment used for operating expenses — about $5.3 million a year. That 15% reflects the understanding that, before the Civil War, money donated by enslavers and the income it generated accounted for at least 15% of the seminary’s income.

The students’ plan calls for the money to be used in part to provide tuition for Black students, and to provide tuition grants to students from Liberia and other countries in West Africa — in recognition that slaving ships brought people from that region into captivity, and that people associated with the seminary were part of the American Colonization Society movement to send newly-freed Blacks to Liberia, unwilling to have them living out of bondage and among whites.

Justin Henderson, then president of the Association of Black Seminarians, told the Washington Post in April 2019 that “repentance doesn’t end with confession. … Restitution is evidence of the repentance.” 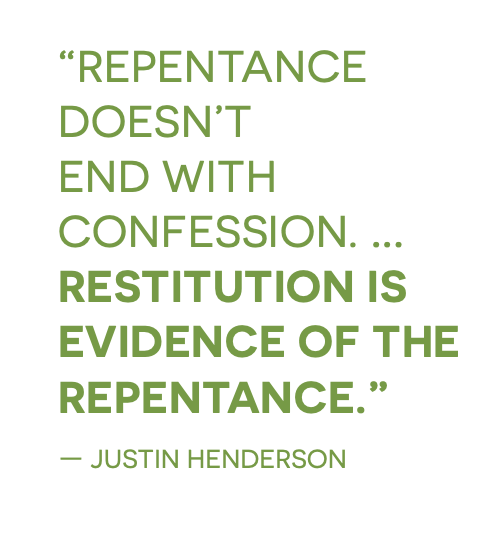 November 2019: The Episcopal Diocese of New York established a task force to consider how it can make reparations for its participation in the slave trade, committing $1.1 million (or 2.5%) from its endowment to fund the work. The diocese also passed four resolutions condemning slavery — resolutions first presented in 1860 by abolitionist John Jay, “recognizing the horrors of slavery,” and which were tabled in the face of opposition from church leaders, with 55 ministers voting to set the motion aside at that time and only seven to pass it.

New York bishop Andrew M.L. Dietsche said in his remarks that, in the 18th century, many in New York were enslavers; the port of New York was a major slave market; and some churches owned enslaved Blacks. “We have a great deal to answer for,” Dietsche said. “We are complicit.”

Enslaved people constructed some church buildings in the diocese. 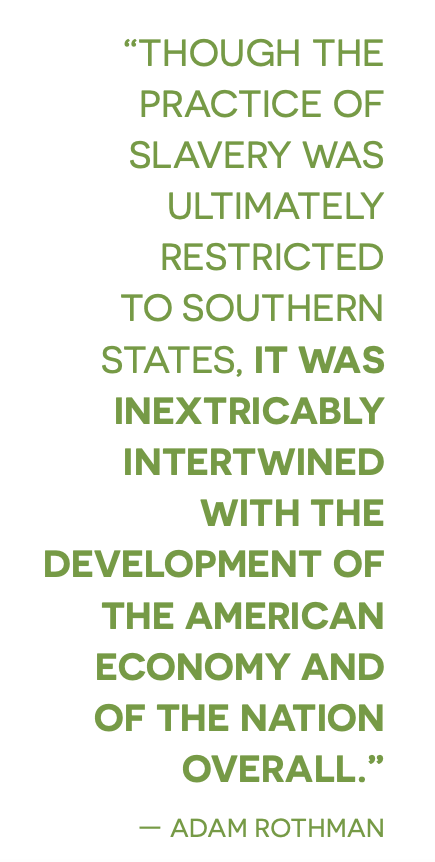 Charles Kramer, the rector of St. James’ Episcopal Church in Hyde Park, New York, told the Episcopal News Service that while the current building wasn’t built with the labor of enslaved people, its predecessor structure was. Richard Jenkins was the congregation’s first sexton; he is buried in the cemetery outside the church. Jenkins was enslaved by Samuel Bard — one of the founding members of the congregation, who gave the land where the church sits and who “owned about eight people,” Kramer told the news service.

Some bishops owned enslaved people, said Diane Pollard of the diocese’s Reparations Committee, in a video the diocese made when the resolutions were passed. Theologically, “it’s like an original sin,” said assistant bishop Mary D. Glasspool.

November 2019: Lawrence Provenzano, Episcopal bishop of Long Island, announced that about $500,000 from the sale of a former church would be used to create a reparations fund. The income that fund generates will be used for scholarships and other opportunities for minority young adults from the region, he said.

December 2019: Reform Jews – the largest Jewish denomination in the U.S. – voted in support of creating a federal commission to study reparations as a result of slavery and bring proposals for reparations to Black Americans. “Today, racial inequity is present in virtually every aspect of American life,” that resolution states. It also states that “though the practice of slavery was ultimately restricted to southern states, it was inextricably intertwined with the development of the American economy and of the nation overall.”

June 2020: The board of trustees of Columbia Theological Seminary in Decatur, Georgia, released a statement called “Repairing the Breach: Deepening Columbia’s Commitment to Black People and Their Flourishing.” The board confessed that the seminary “came into being in the context of and participated in the subjugation and oppression of Black people.”

The Repairing the Breach statement grew out of a year of conversations about institutional racism at Columbia.

The board announced a set of actions seeking to “continue repairing the breach that has been caused by white supremacy.” Among them: paying the tuition and fees for all Black students in master’s programs at the seminary; naming a building on campus for Marcia Y. Riggs, a professor of Christian Ethics, as part of an effort to honor the contribution of Black scholars; and developing a grant program for community organizations working to end racism and police brutality against Blacks.