So what’s it like when the fight for racial justice hits close to home — when protests erupt down the street over a police killing or shooting of a person of color, when people of faith find themselves “smack dab in the middle of the 24-hour news cycle?”

That’s what Denise Anderson, coordinator for racial and intercultural justice for the Presbyterian Mission Agency, asked during an online panel discussion Nov. 21 on the final day of the Moderators Conference, a training event for moderators of presbyteries and synods in the Presbyterian Church (U.S.A.).

Erin Counihan had just started work as pastor of Oak Hill Presbyterian Church in St. Louis two and a half weeks before a police officer shot 18-year-old Michael Brown in nearby Ferguson, Missouri, in 2014. She was brand new in town, so “I just went to where stuff was happening,” following the lead of local organizers. “When the community sparks up, we don’t wait for someone in authority to tell us how to handle this,” she said. “If the community is out, that’s where the church needs to be.”

That can be uncomfortable, Counihan said. “As a white church lady, I like to do things the right way, and do it well” — it makes her anxious not to know her role or what’s expected. Her advice: “Show up, and show up ready to listen and ready to learn. Show up not expecting to be in charge and to run it.”

Michael Moore, now the African American Intercultural Associate for the Presbyterian Mission Agency, was a pastor in Baltimore when 25-year-old Freddie Gray died in police custody in 2015. He grew up in the neighborhood where Gray died; “Ground zero is where I was raised,” he said.

And at the time, after 23 years of ministry, Moore was not much involved in the work of the Presbytery of Baltimore — in part because he didn’t see much commitment of the presbytery to inner-city work or the concerns of people of color. Because of that, “most of my African American colleagues did not want to be at the table,” Moore said.

When Gray died, that changed for him. “I realized Freddie Gray was me,” Moore said. “I was Freddie Gray,” and he wanted his voice heard in the presbytery, working for racial justice.

Some learnings: Often, “the work is not at the presbytery meeting. The work is behind the scenes, in building relationships.” And “you almost have to normalize being uncomfortable to stick together” and continue the work.

That’s how Lance Loveall, pastor of First Presbyterian Church of Kenosha, Wisconsin, began describing some of what’s happened in his community since a white police officer shot Jacob Blake seven times on August 23. During the protests that followed, a white teenager, 17-year-old Kyle Rittenhouse, shot three people, killing two of them. On Nov. 20, Rittenhouse – who has been charged with first-degree intentional homicide and first-degree reckless homicide, along with other charges – posted a $2 million bond and was released from jail.

Before Blake’s shooting, “I always thought this was a big-city problem — Baltimore, St. Louis, Minneapolis,” Loveall said. Kenosha has about 100,000 residents, including “a decent-sized community of people of color,” mostly Latinx and African American, and is “kind of a blue-collar town,” he said.

Along with pastoring the only Presbyterian church in town, Loveall serves as chaplain for the local fire department. He was out of town when Blake was shot, but when he got back, found people on edge at the fire department because of the unrest, and “our church was really split. I think if you have the conversation theoretically around Black Lives Matter and racial justice, that’s one thing. When it comes at the tip of the spear and your community is on fire literally, it tears at the intelligence, and it goes right to the fear.”

In the days after the shooting, Rachel Yates, presbytery executive of the Presbytery of Milwaukee, circulated the draft of a statement on the shooting that Loveall said he disagreed with. “We took a step back,” and “she let me have my moment to process what was going on,” Loveall said. Working together, they wrote a pastoral letter (“she did all the great parts; I mostly added the frustration,” he said).

In the community, there’s a “really strong Blue Lives Matter” sentiment and also a Black Lives Matter movement, and at times “they’re at opposite corners screaming at each other,” Loveall said.

Some of the buildings burned during the protests housed black-run businesses — but often the owners of those buildings are white, Loveall said. As the cleanup and rebuilding progresses, there’s “the temptation to gentrify it, to price the people who live there out of their neighborhood,” he said. He’s pushing the ideas of “don’t let this happen if we can avoid it.”

He’s begun reading books and preaching more directly on racial justice — “as the kids would say, I was woked a little bit.” As he’s moved in that direction, some church members have left.

With Rittenhouse out on bail and his trial pending, “right now we’re in a place of sort of holding our breath, waiting for what might happen next.”

Ryan Landino, lead presbyter for transformation of Great Rivers Presbytery and a member of the PC(USA)’s Special Committee on Racism, Truth and Reconciliation, sees his as a “spiritual leadership role,” supporting pastors and others who are preaching about and working for racial justice, and using social media to engage Presbyterians on those issues — hoping that by speaking on those issues he makes space for others to do as well.

After George Floyd was killed in Minneapolis, “there were pastors saying Black Lives Matter from the pulpit who had never said the word black before,” Landino said. “With that was the resistance” of those who disagreed.

He tries to raise issues of social justice on his blog and on social media, and engage those who are angry, for example, at property damage or looting during protests. One white Presbyterian elder said, “My community would never burn a CVS.” But “she doesn’t understand what it means to have a knee on her neck,” Landino said — or acknowledge that her town was a historic sundown town, where blacks were not permitted to be after dark. For some whites “there’s a willful ignorance.”

He tells those concerned about fires and looting in the protests to look at the patterns and costs of structural racism. “If we ignore the conditions that have led to this kind of moment,” then “it’s like we’ve been watching this pot boil over for decades and doing nothing. … We blame the water and not the fire.”

Instead of complaining about misinformation in the media, Presbyterians concerned about racial justice can create conversation spaces to provide information for greater understanding. “It’s a holy challenge,” Landino said. In those spaces, “let’s be constructively uncomfortable.”

Recognizing that 70 million Americans voted for Donald Trump in the 2020 election – many of them white Christians – “we don’t need PhDs and parliamentarians right now,” Moore said. “We need white prophets who will risk, be co-conspirators. … At this polarizing moment, we have one crack at it. The church will forever be known as irrelevant or it rose up to be a prophetic witness for the Lord Jesus Christ. That’s the only choices we have.”

Counihan encouraged Presbyterians to follow the lead of people of color in the community already doing the work, and look for ways churches can contribute — such as using their property as places for people to meet and organize. “We can be creative about it,” she said. “How are we using our budgets? How are we using our spaces? And how are we having uncomfortable conversations?”

Anderson reminded the moderators that doing the work of peacemaking and justice is a gospel mandate — and the PC(USA) has a church-wide antiracism policy and resources for doing the work.

Loveall encouraged church leaders to use the calm times to prepare themselves and their communities — to “educate ourselves when there are moments of peace,” and begin the work of racial justice. Little by little, introduce ideas, talk to one another, “change what people are used to hearing from the pulpit, so it’s gentle and maybe they don’t feel the need to leave … little doses at a time.”

From the Zoom chat:

With her congregation, Counihan said she’s found success in Bible study. “When we dig deep into Scripture, and we talk about oppression and we talk about empire and we talk about systems that harm people, it’s right there. … It has changed our ministry and it is changing who we are as a church. It’s in the Book. It has been there the whole time.” 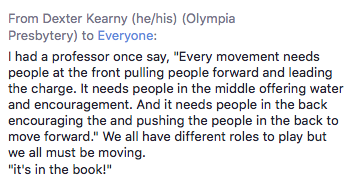