One of Latricia’s earliest memories is looking out a sliding glass door and wondering why everything looked orange.  Even though she was just 5 years old, she quickly realized that her world was on fire and filling with black smoke because a petroleum storage tank had ignited. This wasn’t the first or last time this happened — and she eventually learned that the people in her neighborhood could not afford to evacuate, so they watched and breathed in the smoke.

The generally accepted definition of environmental racism is that it is any policy, practice or directive (whether intentional or not) that differentially affects or disadvantages individuals, groups or communities based on color and race. Robert Bullard, an author and professor of urban planning and environmental policy who has been called the “father of environmental justice,” reports that people of color and the poor bear an unequal environmental burden because of where they live, their limited income and their lack of access to health care.

Fast forward almost 45 years from her childhood memory, and Latricia is now Reverend Dr. Latricia Scriven, living in Tallahassee, Florida, where she is a minister for the New Life United Methodist Church and director for Florida A&M University Wesley Foundation (a Methodist student ministry). We met when she shared her story at Greenfaith’s “Sacred People, Sacred Earth” event that First Presbyterian Church in Tallahassee and the Tallahassee Green Faith Alliance hosted called “Ring the Bells for Climate Justice.”

I learned that she grew up in the Baton Rouge, Louisiana, along the Mississippi River and that way too many people in her family suffer from cancer.

The area where she grew up was originally called “Plantation Country” and was home to enslaved Africans.  It is now often called “Cancer Alley.” Stretching 85 miles from Baton Rouge to New Orleans, it’s home to 150 oil refineries, plastics plants and chemical facilities. It also has another disturbing label: “Sacrifice Zone” — reminiscent of the “National Sacrifice Zones,” a term used during the Cold War to describe areas contaminated by the mining and processing of uranium to create nuclear weapons.  Many of the people being sacrificed in this area are people of color and the poor.

Scriven’s mother was one of eight siblings who lived in and near Cancer Alley — three have died from cancer. Her mother and another sibling now have stage 4 cancer.  Until I mentioned it, the family had not heard the area referred to as “Cancer Alley,” but were aware that lots of people they knew were dying from different forms of cancer.  No one has attributed their many illnesses to the chemical or fossil fuel industries where they grew up.

Scriven’s son was born with cataracts in both eyes, a hole in his heart, asthma and a foot problem.  Her son has overcome these problems, but Scriven has experienced a deep guilt thinking that the problems were caused by something that she did.  She just received a letter from the Bascom Palmer Eye Institute inviting her to participate in a study about the link between environmental exposure to chemicals and cataracts in newborns.  Until this letter, she said that she’d had no idea that there may be a link between her son’s cataracts and the fact that she was living in Cancer Alley while pregnant.  Her sense of relief is enormous.

Her husband and his sister grew up in Jacksonville, Florida, and played on an adjacent playground that was built over a former toxic waste dump. It was located across the street from an abandoned petroleum facility. His sister has been diagnosed with cancer.

Part of Scriven’s story can be attributed to the use of fossil fuels. She spends a lot of time driving from Tallahassee to Louisiana to take her mother to chemotherapy. In mid-February, she had to drive through the blizzard that made the headlines because of the massive electrical generation failure that led to shortages of water, food and heat for 4.5 million Texans. In Louisiana, snow is a rare and serious event, so even small amounts shut down public transportation.  Scriven drove through extreme weather to chemo with her mom, only to find that with no public transportation, the nurses couldn’t make it to the clinic.

In every major climate-fueled disaster (like the 2021 blizzard), the most vulnerable populations generally suffer the earliest and most damaging setbacks, again, because of where they live, their limited income and their lack of access to health care.

The impact of fossil fuel use on the lives of people of color and the poor is not well understood by the general public.  Bullard’s work has shown that there is an unequal burden of pollution on Black households.  Half of the population that is at an increased cancer risk from oil refinery pollution are people of color. African Americans are almost 10 times more likely than whites to die from asthma that is made worse by higher temperatures.

If there is any doubt about the health impacts of fossil fuels, a recent study published in Environmental Research found that 350,000 Americans die prematurely every year because of fossil fuel burning; worldwide, the deaths total eight million every year.  Almost one in five deaths worldwide are caused by the burning of fossil fuels. This is shocking news — that didn’t make headlines.

Scriven’s life is difficult, yet she seems OK. I asked why. She said that she is a Black woman. I wouldn’t dare to imply that I can grasp what it means to be a Black woman in our broken world, but I think that I understand a wee bit of what that conveys.  The burden of racism on the Black community is profound and unrelenting.  It comes in many guises and from all directions. Environmental racism is just more of the same old racism.

It is tiring for her, and she is tired of being sick and tired.

She understands the gravity of her situation.  She feels the emotion. She has chosen to spend her time and energy on things that she has the power to address: her ministry and her family.  She says that her superpower is “laughter and joy,” and I can attest to the uplifting feeling one gets being around her.  She laughs a lot and made me laugh with her. She radiates peace and happiness. She is a woman of grace whose forgiving attitude deeply touched me.

Her life and that of her family, and all families who are hurt by environmental racism, matter. We know that it is unjust and wrong to continue burning fossil fuels that are hurting so many when we have a safe and cost-effective alternative — renewable energy.  It is unjust that our denomination continues to delay categorical divestment of its fossil fuel holdings that are supporting an unrepentant dangerous industry.  It is unjust that we say that we care for “the least of these” when our collective actions don’t reflect this.

I am grateful for the work of the PC(USA) Special Committee on Racism Truth and Reconciliation.  It has asked us to engage in the work of eliminating racism against people of color and to repent for our complicity in the horrific history and unjust treatment of people of color, which continues to this day.  A long overdue step for our denomination would be to divest our fossil fuel holdings.  I am pretty sure that Latricia Scriven would appreciate it. 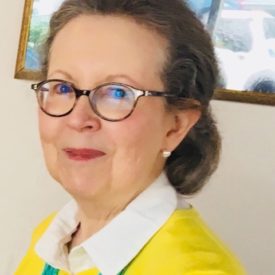 Pam McVety is a retired scientist, stewardship of creation enabler for the Florida Presbytery, a climate justice advocate and grandmother. She lives in Tallahassee, Florida.